I find the new genre of cosplay photography very interesting as it opens up for more creativity than normal portrait photography often involves.
One might say that it is copying and recreating something someone else created, but I think more of it as interpreting the canon in a new way making use of the creative paths that have been laid out. It's also about telling a story more than a CV photo ever can.

Also the process of creating the photo is different than we often experience with other portrait genres. It's about collaborating with the cosplayer, who is a creative and as passionate about this genre, it's about creating something together instead of creating "just" for others.

Until now, we've only had one cosplay shoot - the Blade Runner 2049 Cosplay Shoot with Mai's Cosplay in February. It's the atmosphere and colors of the Blade Runner franchise that intrigued me and that I wanted to recreate. We had the shoot in our homestudio and it really made us explore creative studio photography.

And now we've collaborated with Lærke from Mai's Cosplay again! This time we wanted to bring Pennywise from Stephen King's It to life. I haven't read or watched It, but I could see from screenshots that sewers and similar locations play a big role. So I wanted a dark and creepy location for this shoot.

After having lived in Copenhagen for some years now, I slowly begin to have catalogue of interesting photo locations in my mind. So I quickly decided to do the shoot at a location not far from the place where I once lived in Copenhagen.
It's a simple pedestrian tunnel under a larger street, right beside the city train tracks. It's not a specifically memorable tunnel, but I've spent some painful minutes in it back in the days when I could move my ass to go running once in a while. That's why I know that it is long and rough enough to be a great location for this shoot. 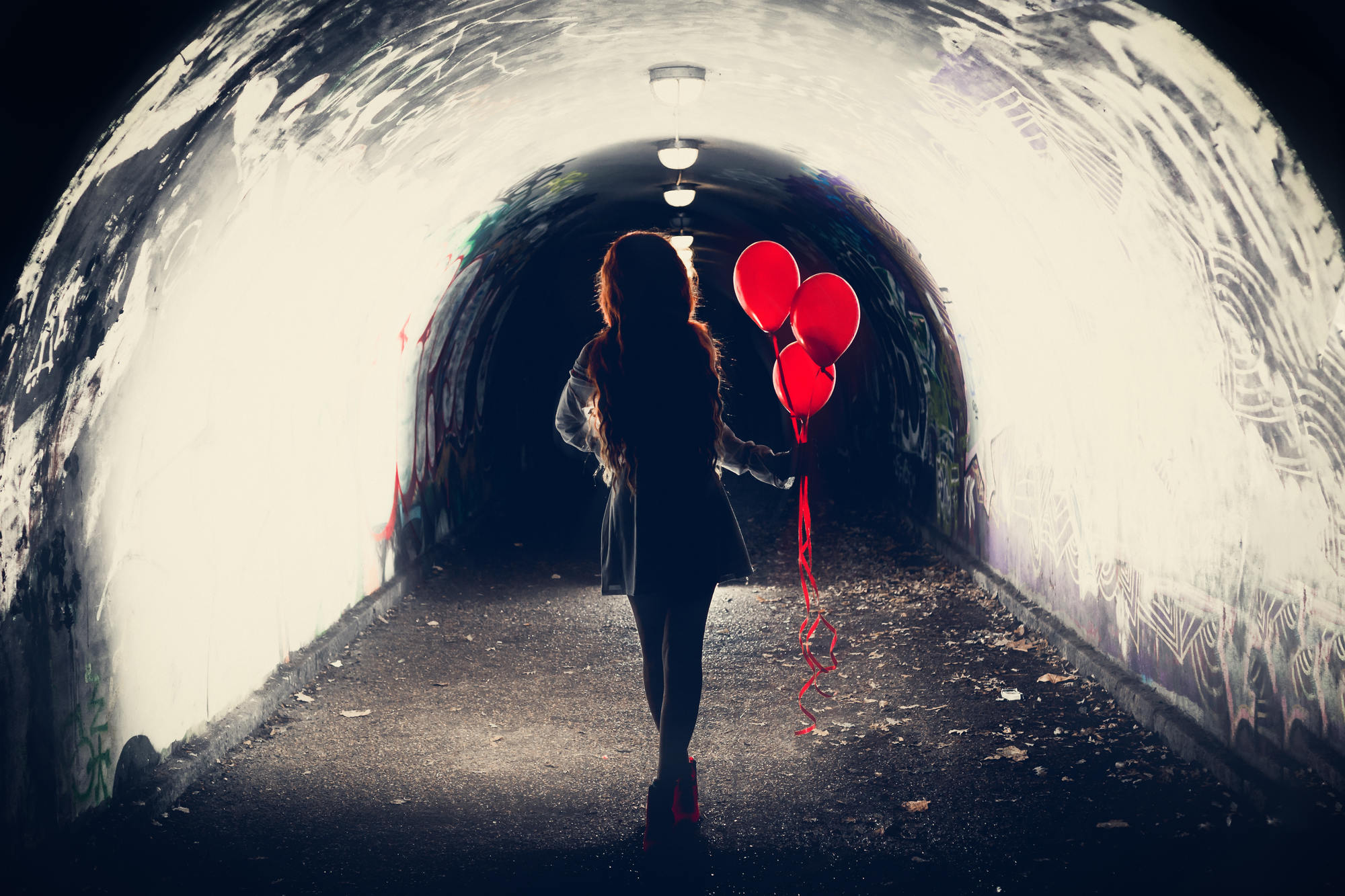 You really don't need to have big, epic locations to take some good photos. Sometimes it's enough to just know your neighbourhood!

As the tunnel was just beside a train station, there was a lot of people passing through which made for a lot of funny scenes when both kids and dogs eyed us very suspiciously before moving on in a safe distance.

We shot a late November afternoon, so it was getting darker when we started, and was completely dark when we finished. For the shots, we either used one or two speedlights. 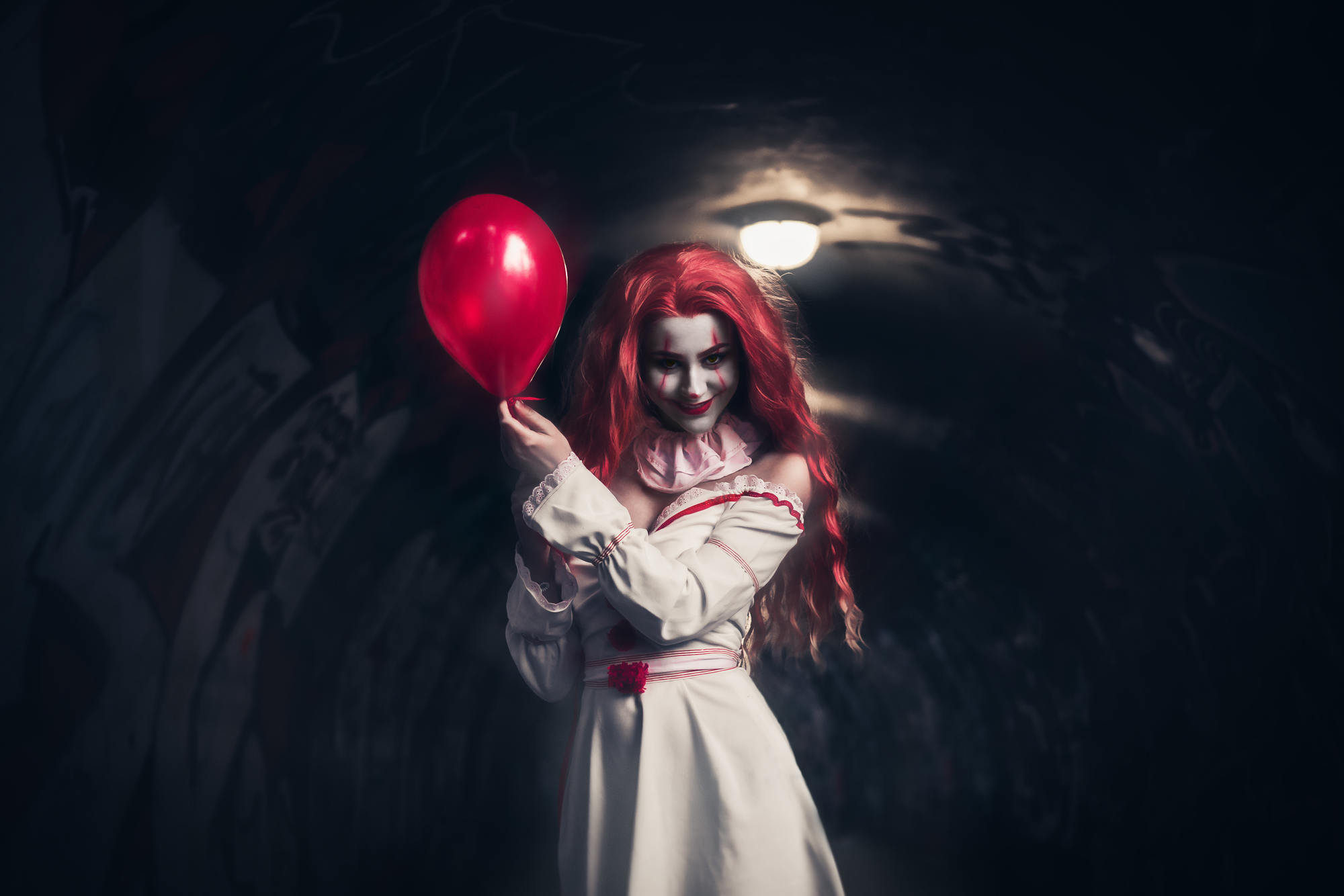 For this set, Lærke was standing at the entrance of the tunnel with Jonathan pointing a speedlight down at her from camera right. 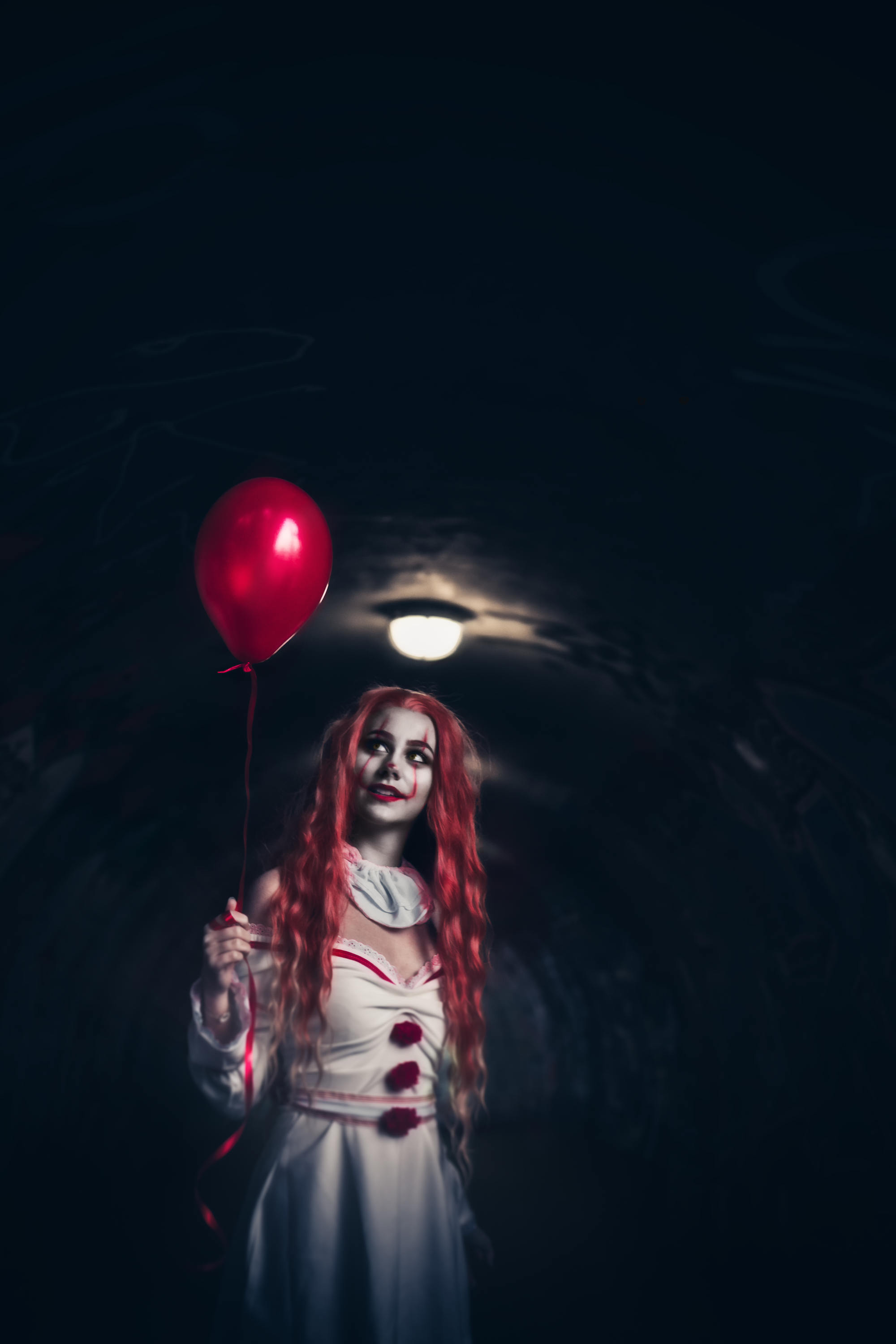 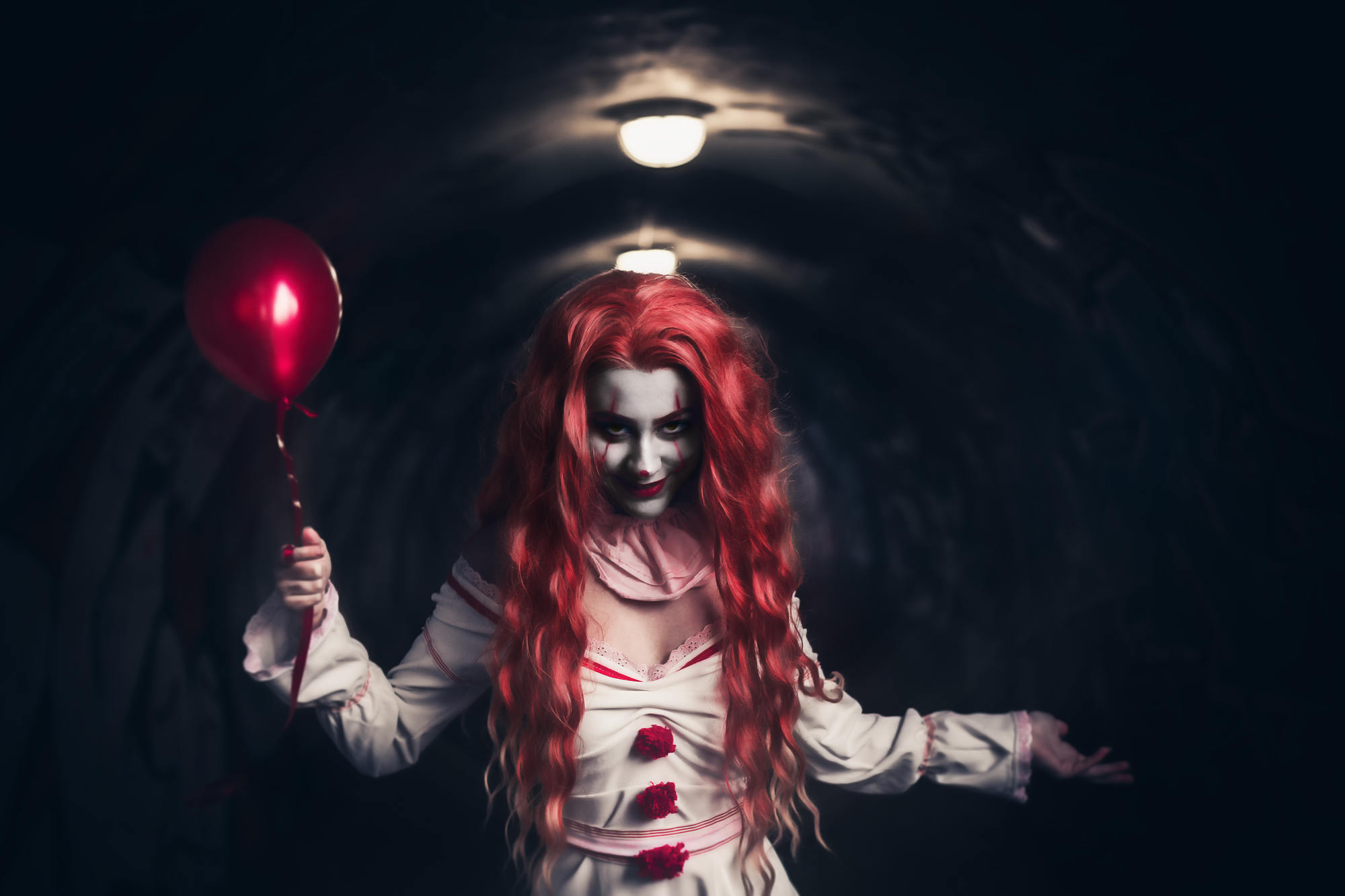 I also really wanted to try and play with gelled flashs on location, so we took photos with a blue gelled speedlight pointing at the tunnel behind Lærke.
Even though it's very impressive how you can change the look and feel of a place by using gels and I want to experiment more with it, I actually ended up liking the not gelled photos more. What do you think? 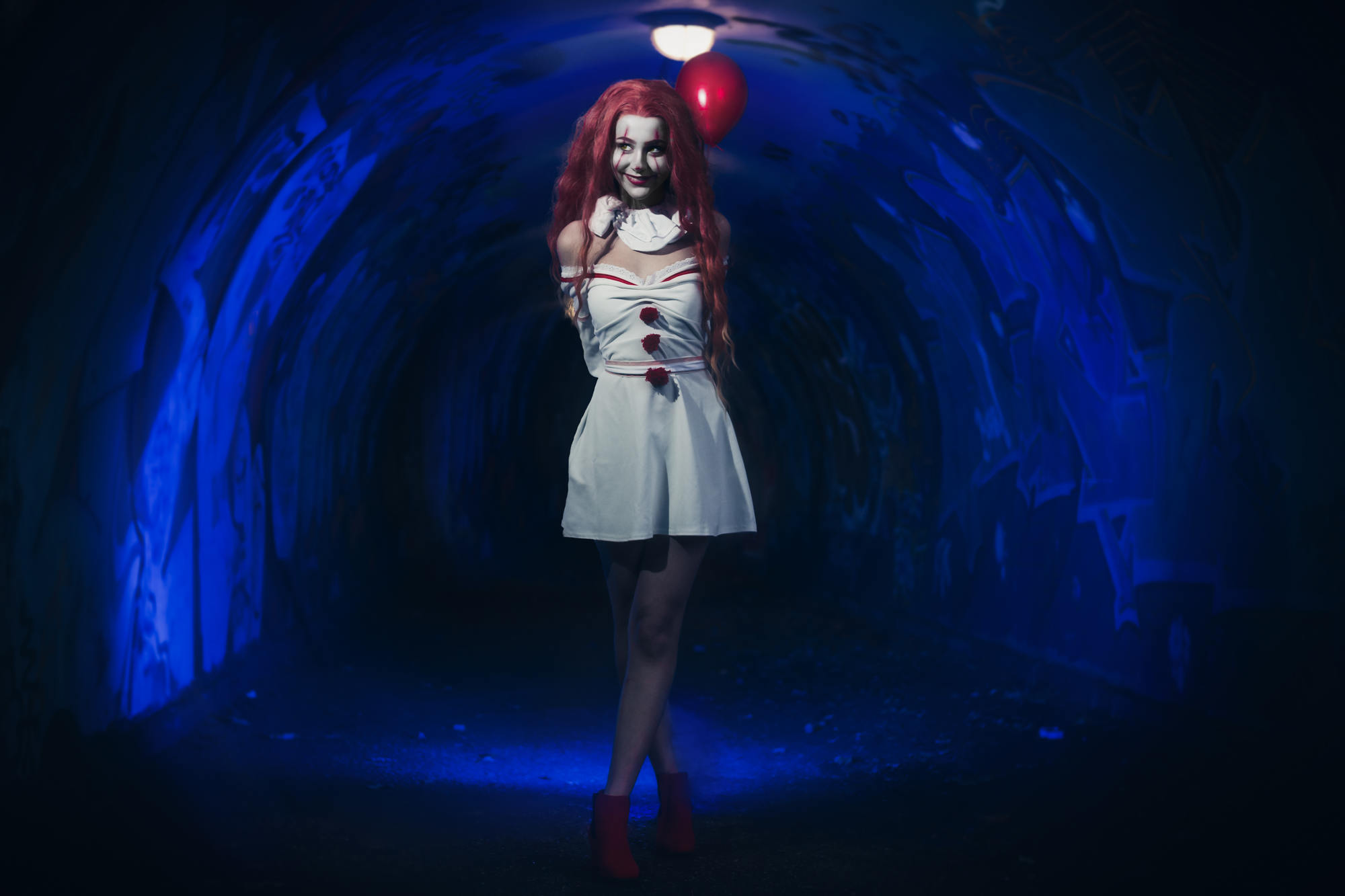 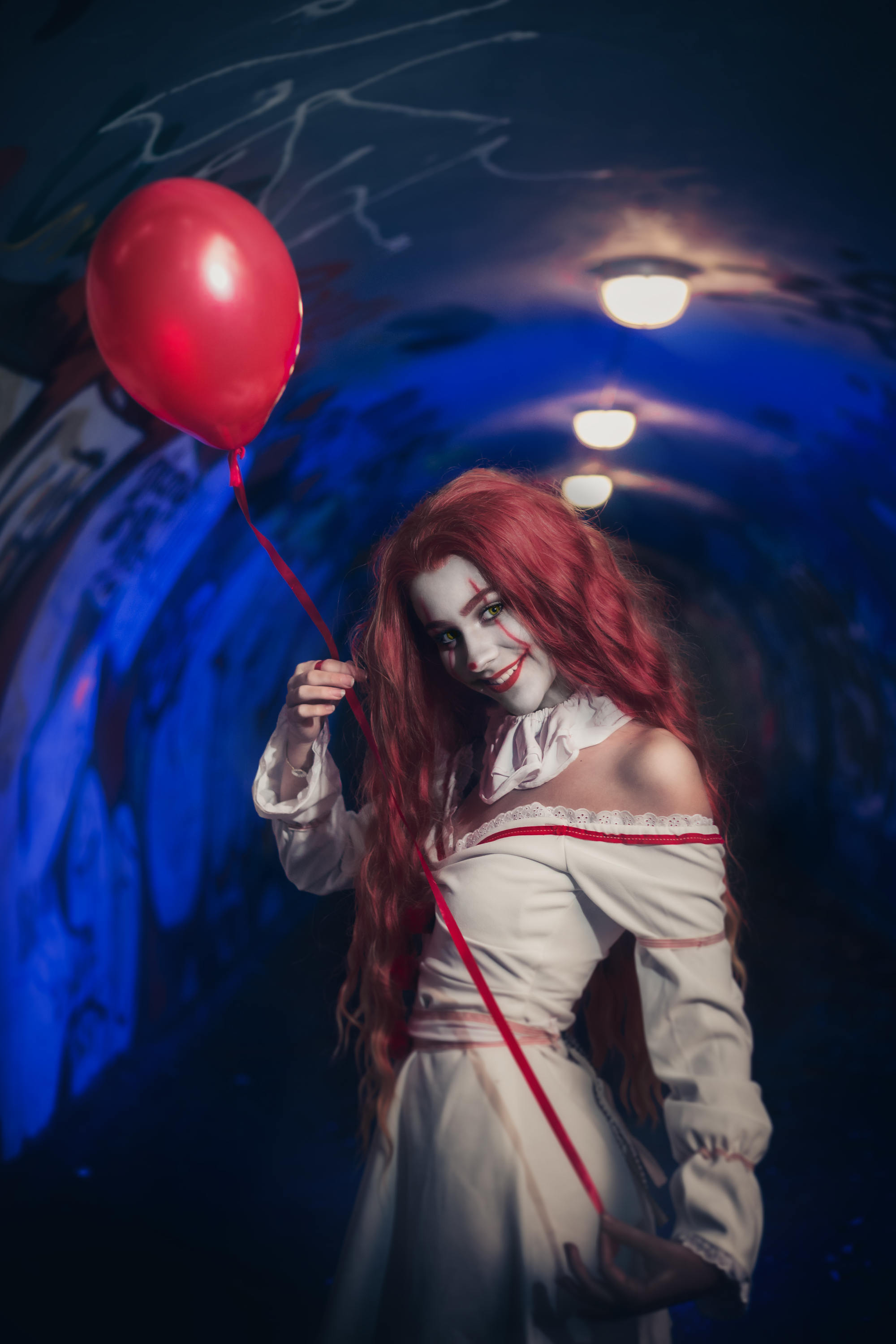 For another set, Lærke stood just in front of the wall and we directed a speedlight towards the opposite wall to create some creepy, undirectional light. The light and atmosphere ended up being very diffuse and a little confusing, which I find very fitting for a character that usually lives and eats kids in a sewer. 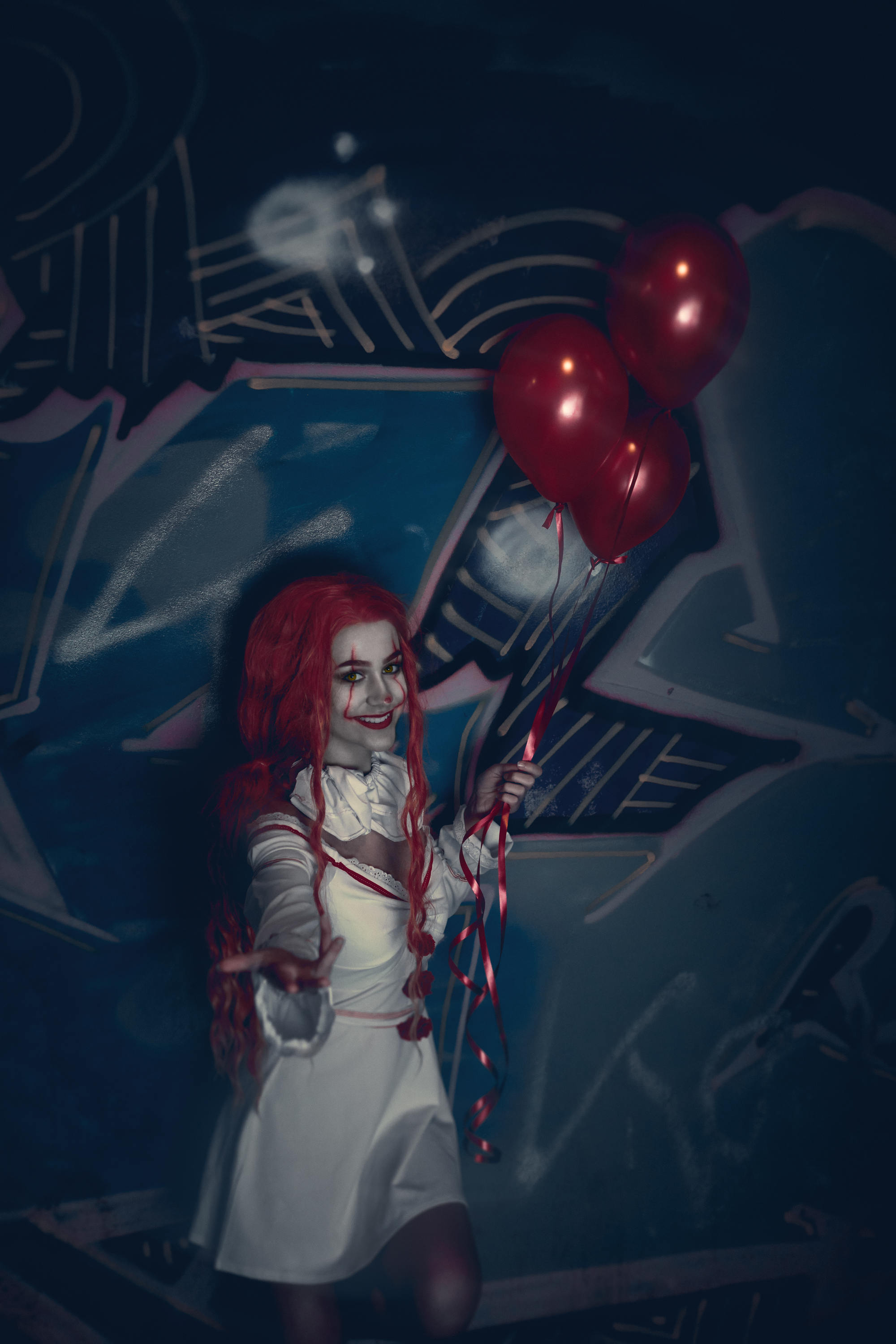 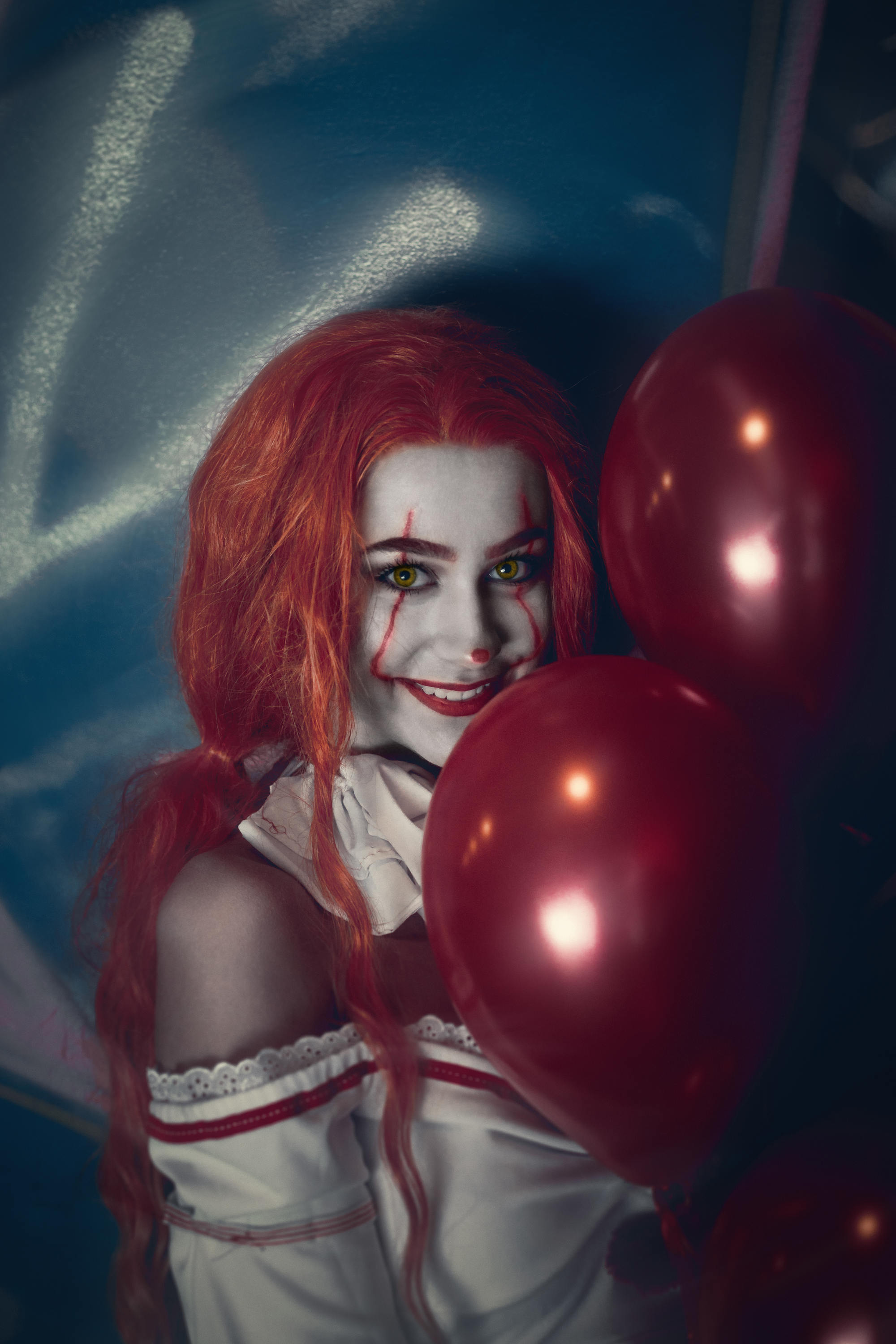 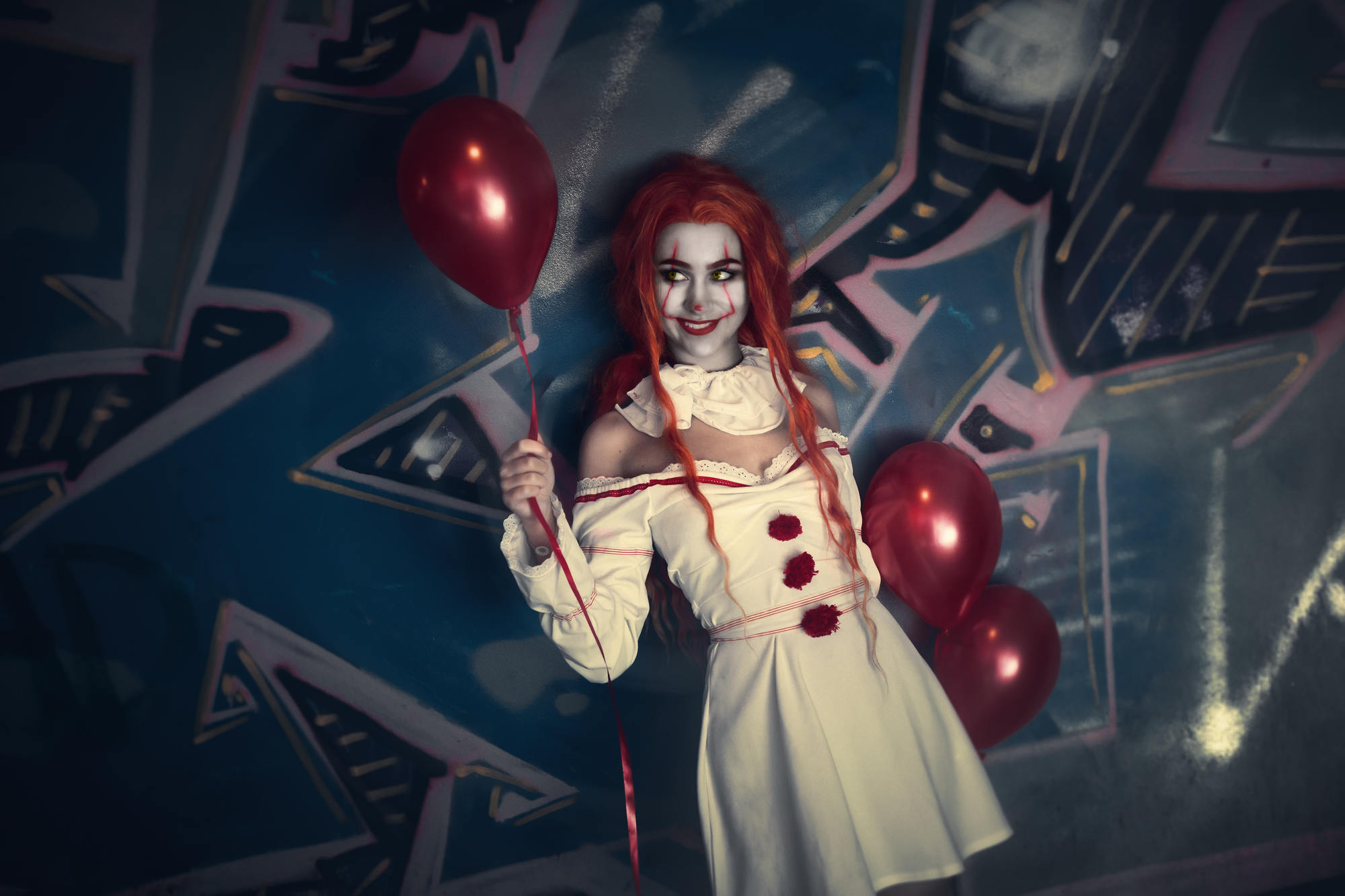 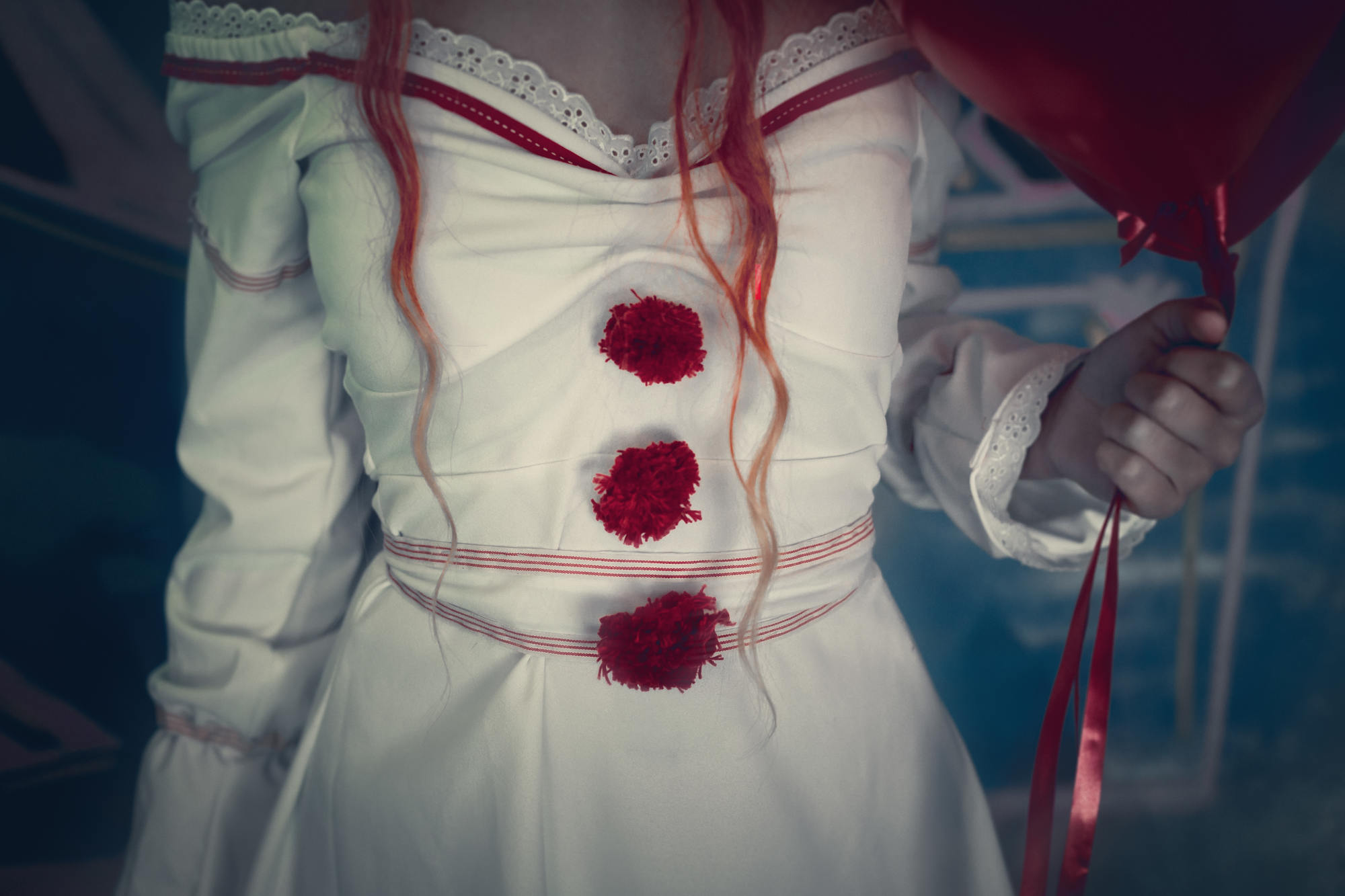 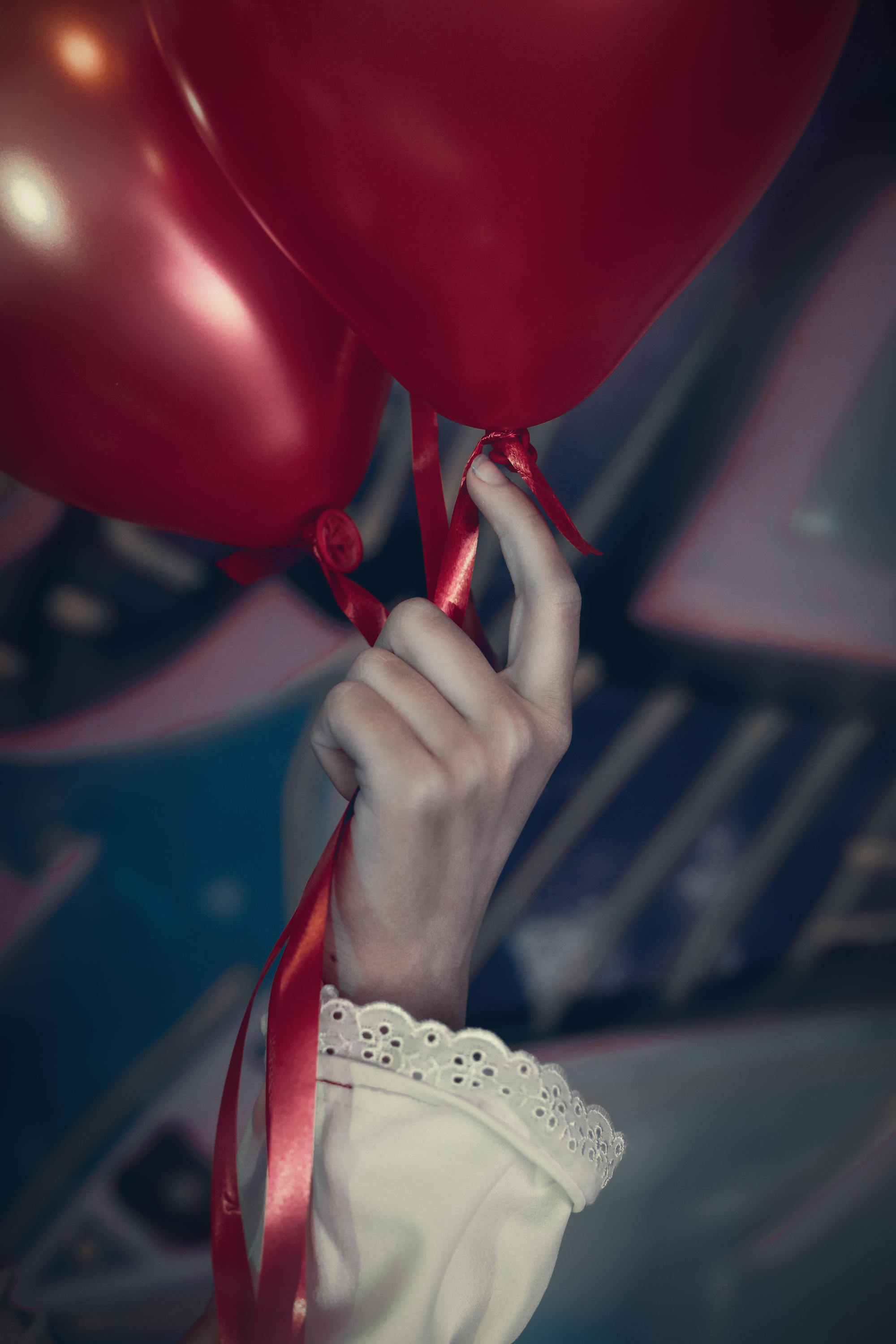 For the last two shots, we tried out some light setups with great contrast to mimick some of the It promotional photos. For one we pointed the flash directly into poor Lærke's face, focusing the light with the Black Foamie Thing.
After standing out in the cold, Lærke took it all like a true pro and didn't even blink! 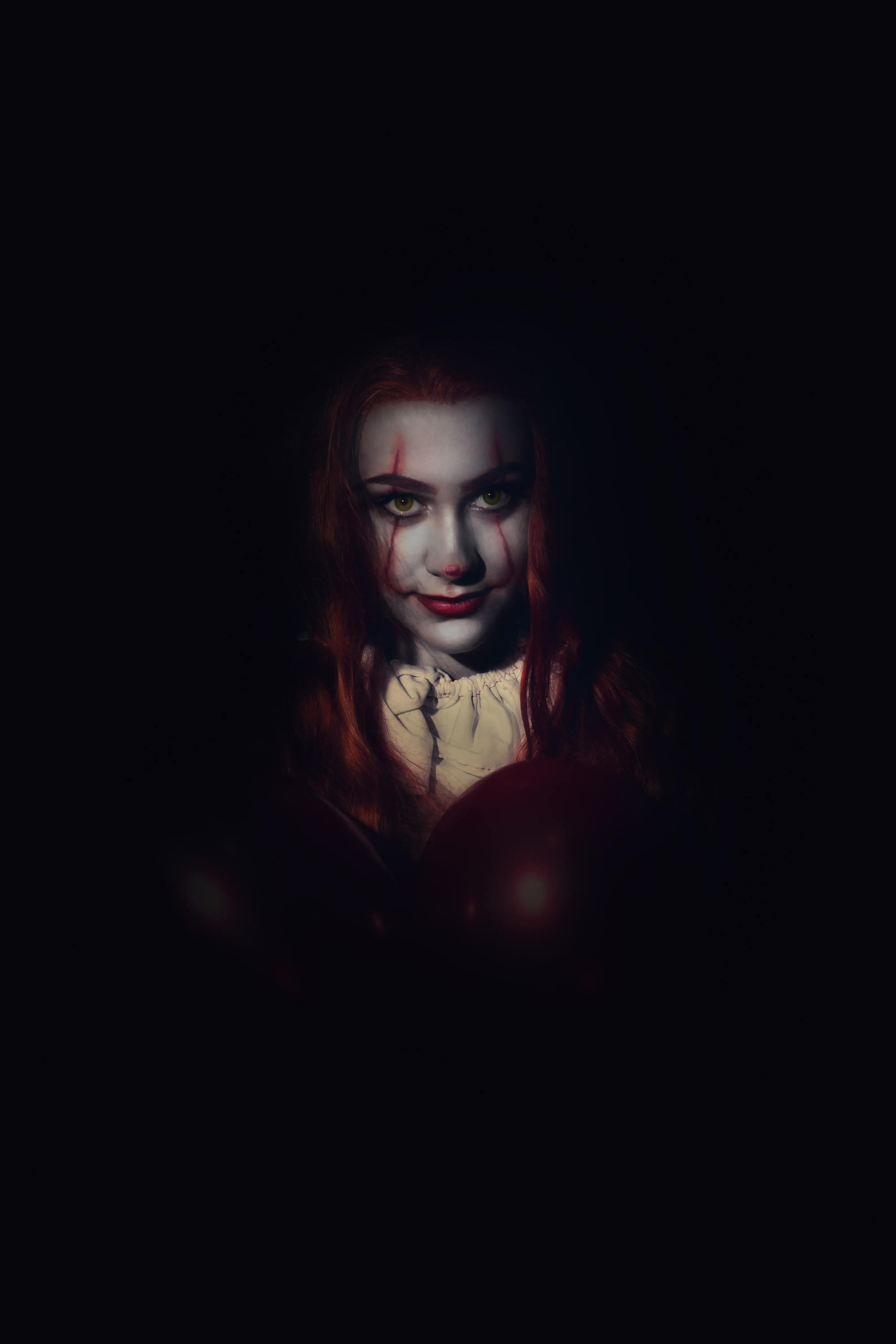 We also set the flash to full power and just pointed it backwards. 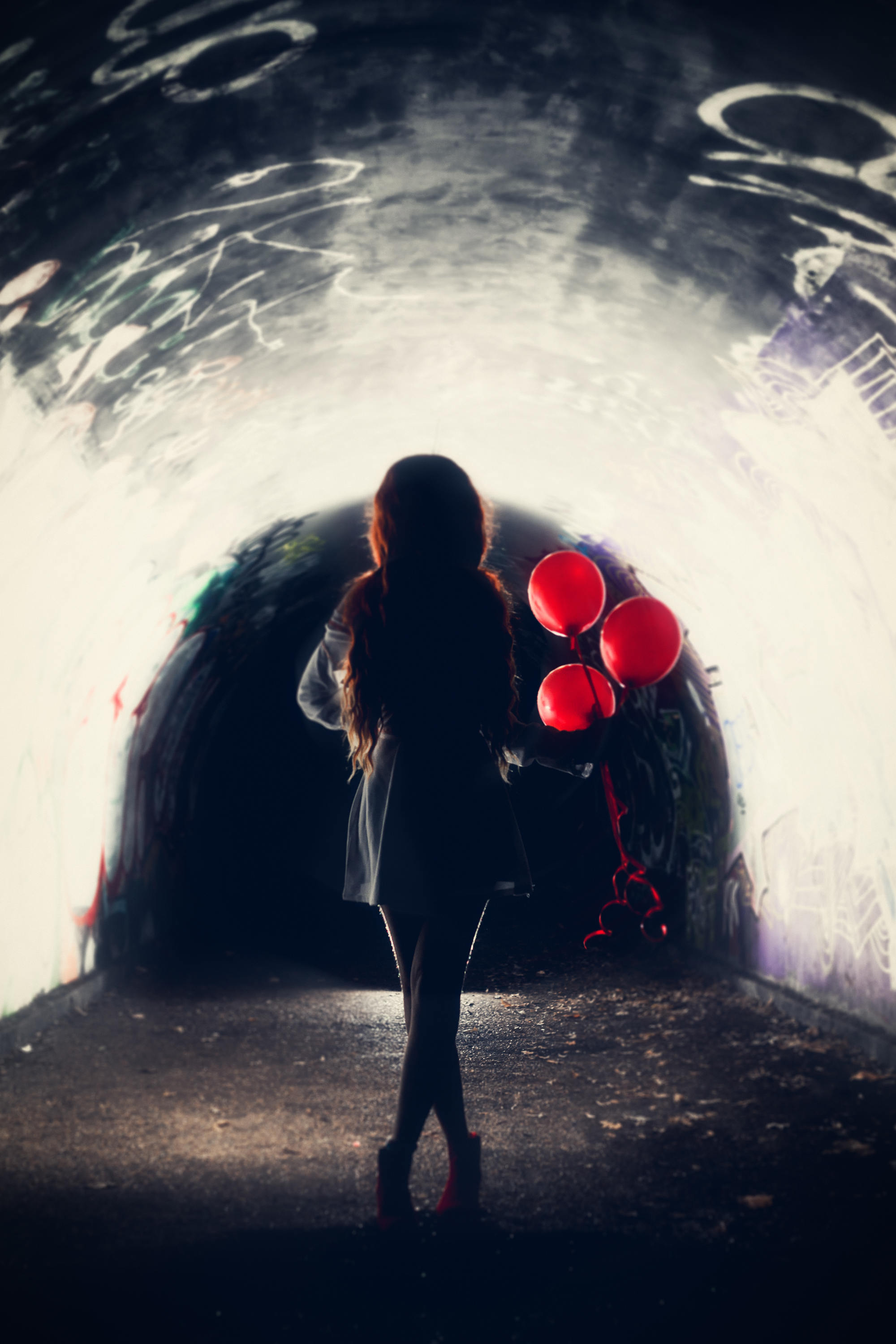 We bought a small helium bottle for the occasion, which can fill up to 12 balloons. 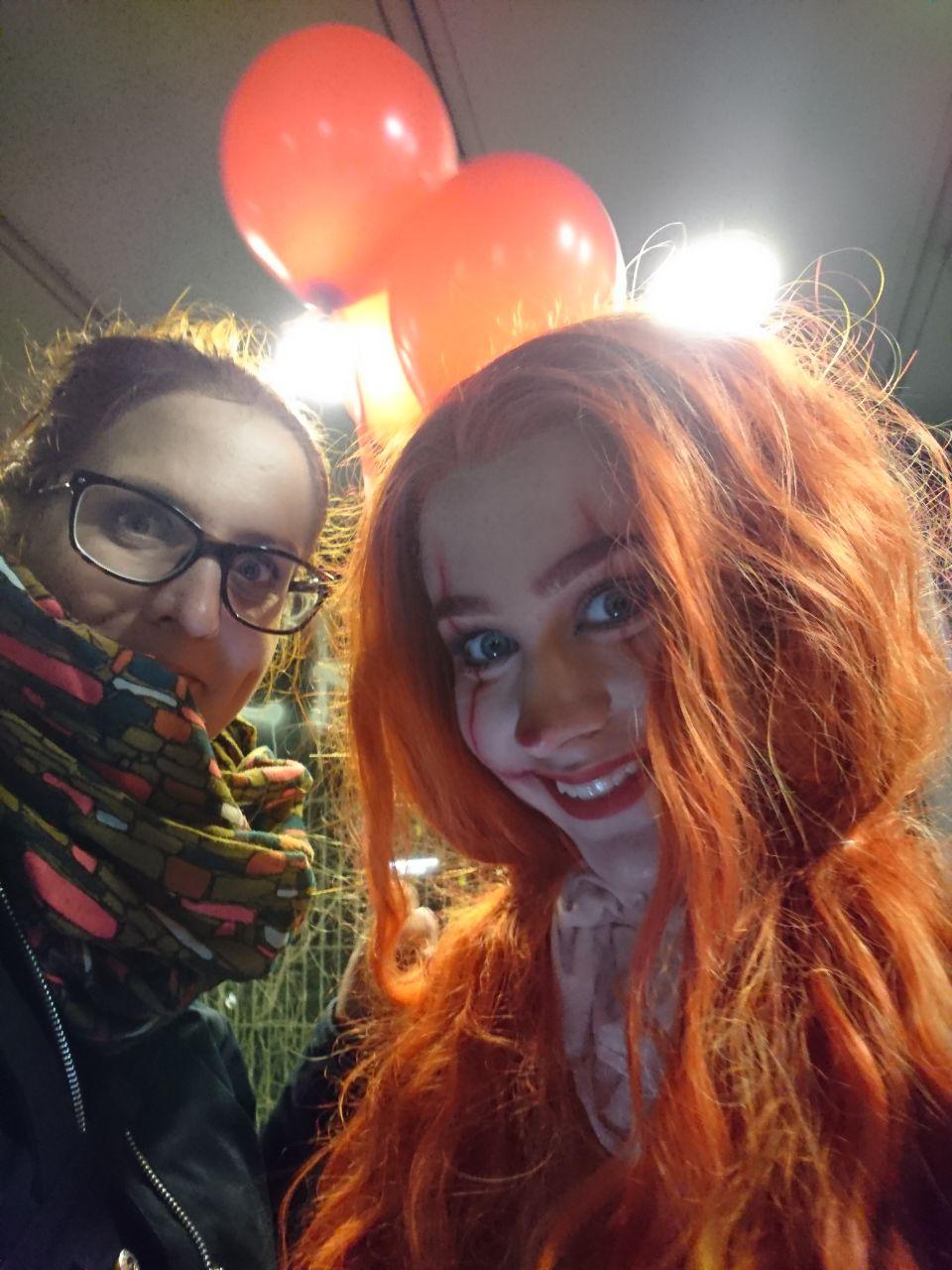