For some years now we both use the Intuos CTH-480 tablet* when editing photos. It is a small, beginner-friendly tablet-and-pen solution by Wacom that you use in stead of a mouse. It isn't very big and very easy to use with great support across operating systems.

If you're looking for an alternative to using a mouse, we can definitely recommend it and similar models as great value for money.

I wanted an upgrade, though, and started looking into drawing tablets with built-in screens. While moving sliders in Lightroom works well enough with the little drawing tablet, I imagined that doing more advanced editing and manipulation in Photoshop would be more precise and fun when you are actually able to look at what you're doing directly.

To my surprise there was a lot of variety in price range and skill level and the entry level wasn't as expensive as I thought. 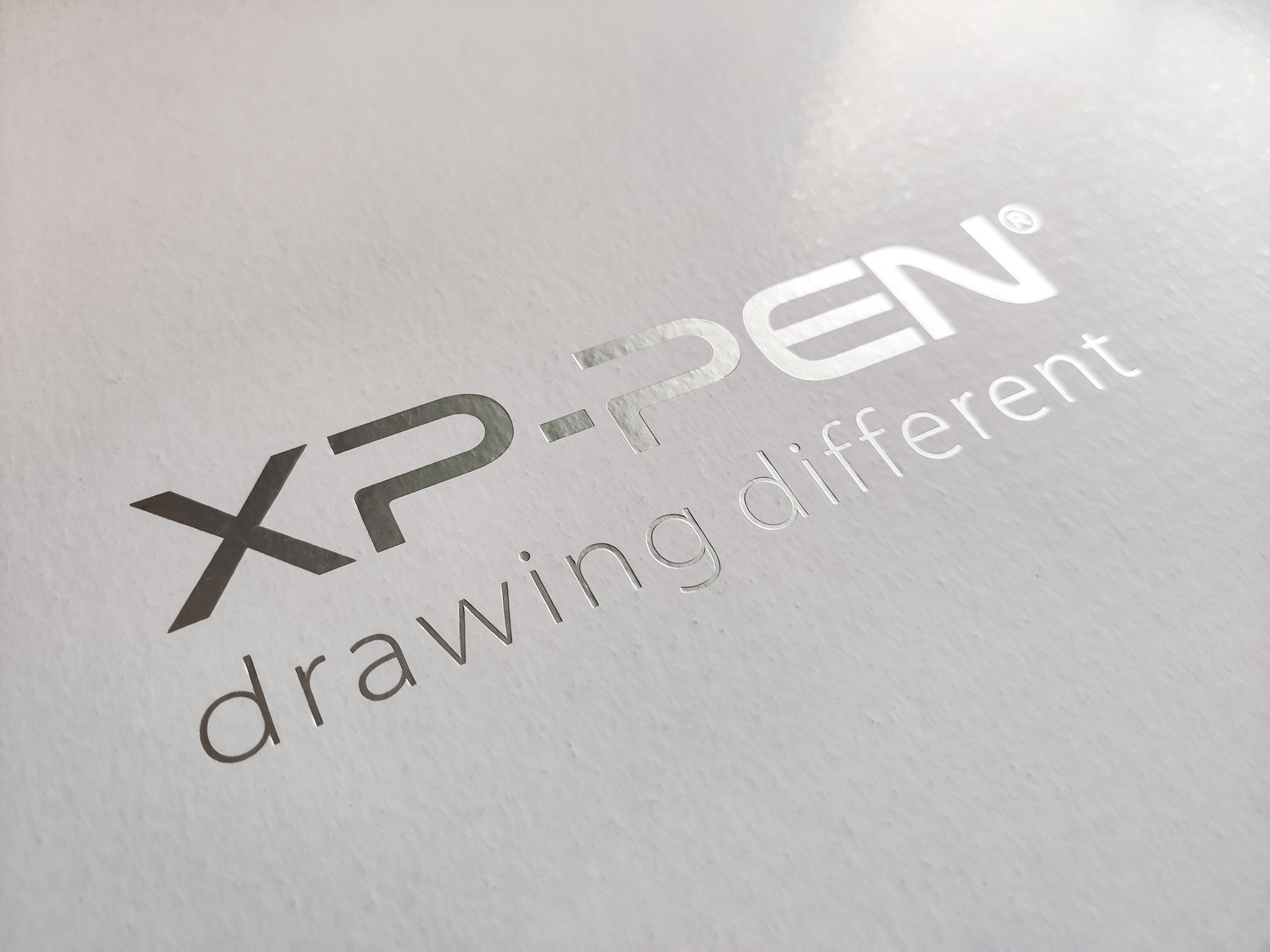 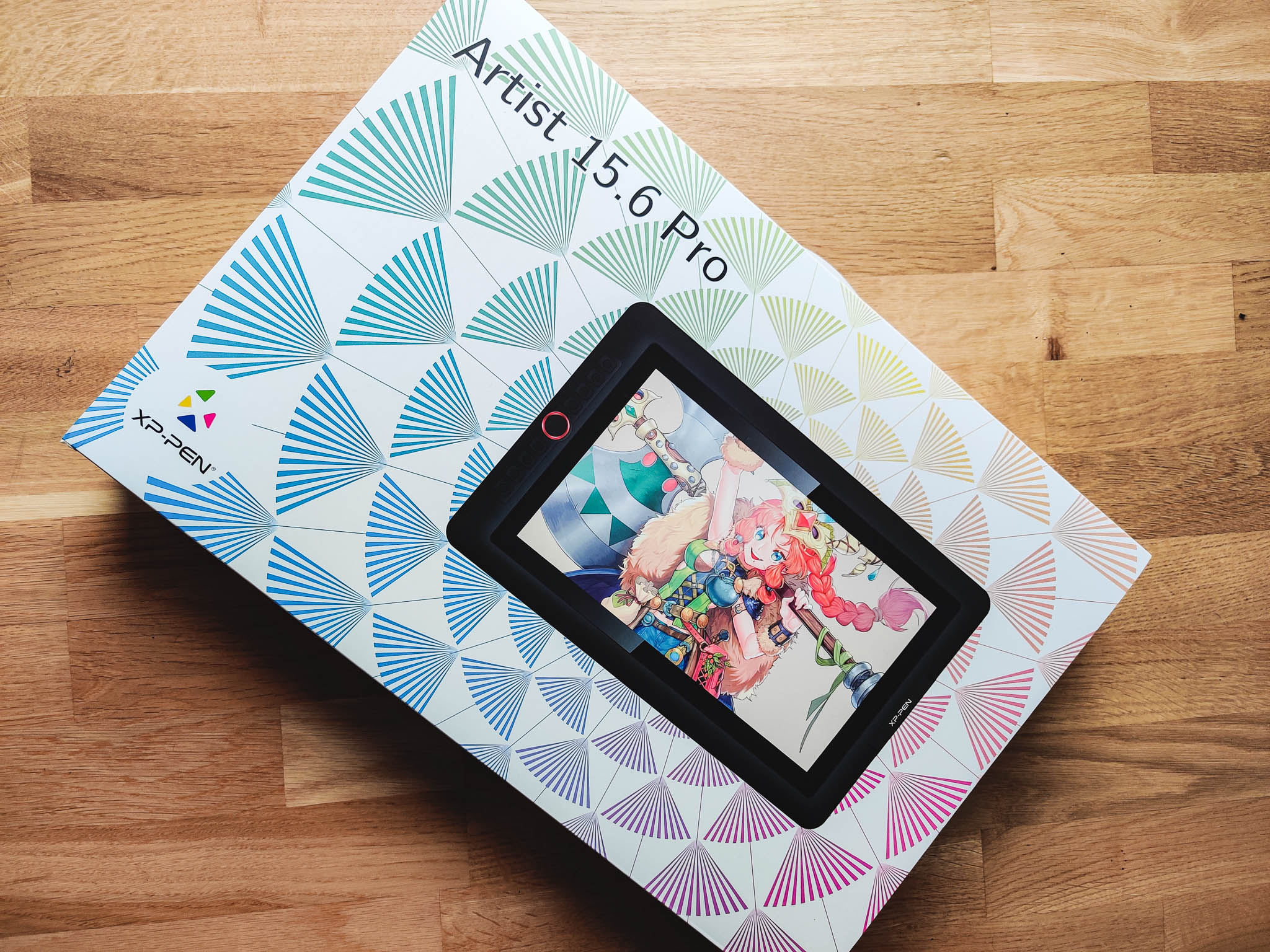 Wacom is still a big name in the drawing tablet industry, but other brands are emerging on the scene and slowly pushing their way onto various recommendation lists. I ended up getting the XP-Pen Artist 15.6 Pro* as it was recommended and praised by a variety of illustrators and graphic designers across my social bubble on the Internet.

Upgrading from the Intuos CTH-480 to the XP-Pen Artist 15.6 Pro definetely is a bit of a change. The Intuos CTH-480 just needs to be plugged in with USB and might require some updated drivers, but that is mostly it.

The XP-Pen Artist 15.6 Pro comes with more hardware. The delivered cables require at least one HDMI and one USB slot in your computer. For power, you either need another USB slot or a wall socket close by. 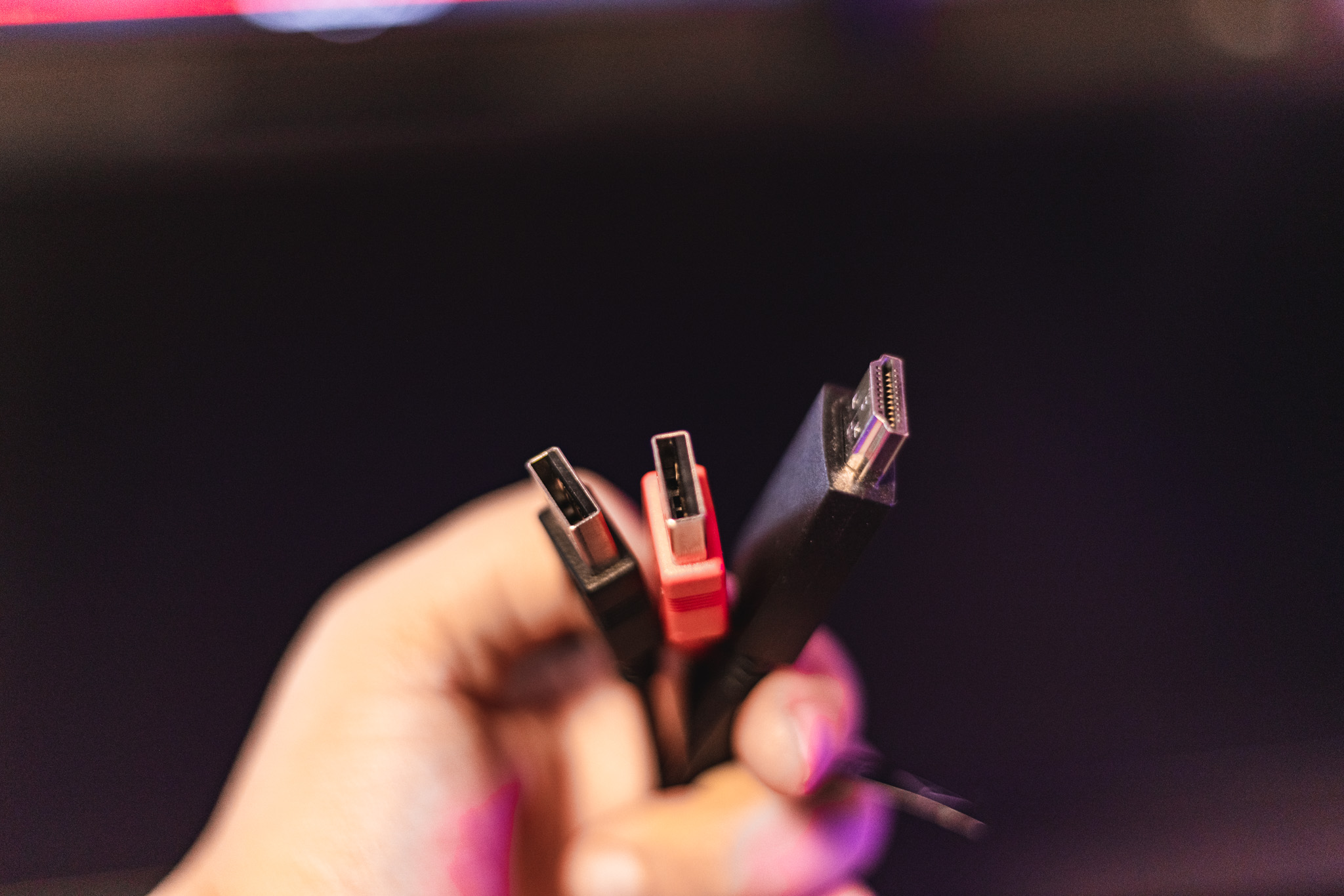 Depending on how powerful your computer is, using a drawing tablet with built-in screen like this might have an influence on its performance, as the tablet both functions as monitor and as mouse.

The pen coming with the tablet works without battery, which was an important factor for me. It is stored in a nice case which also contains another eight so-called pen nibs. The nibs are all the same (they don't function as different brush types, for example) and are backups for when the original nib in the pen is worn down. 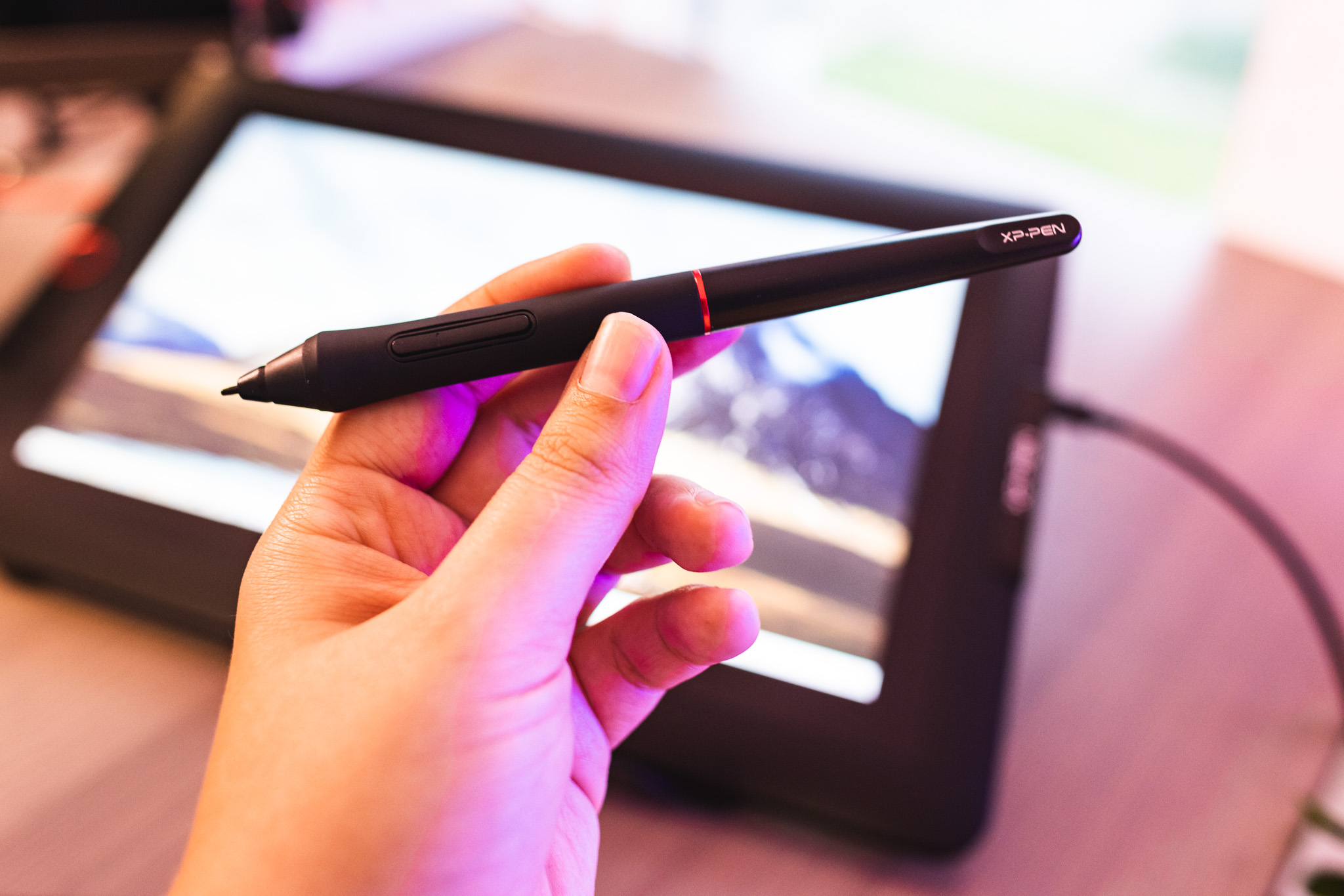 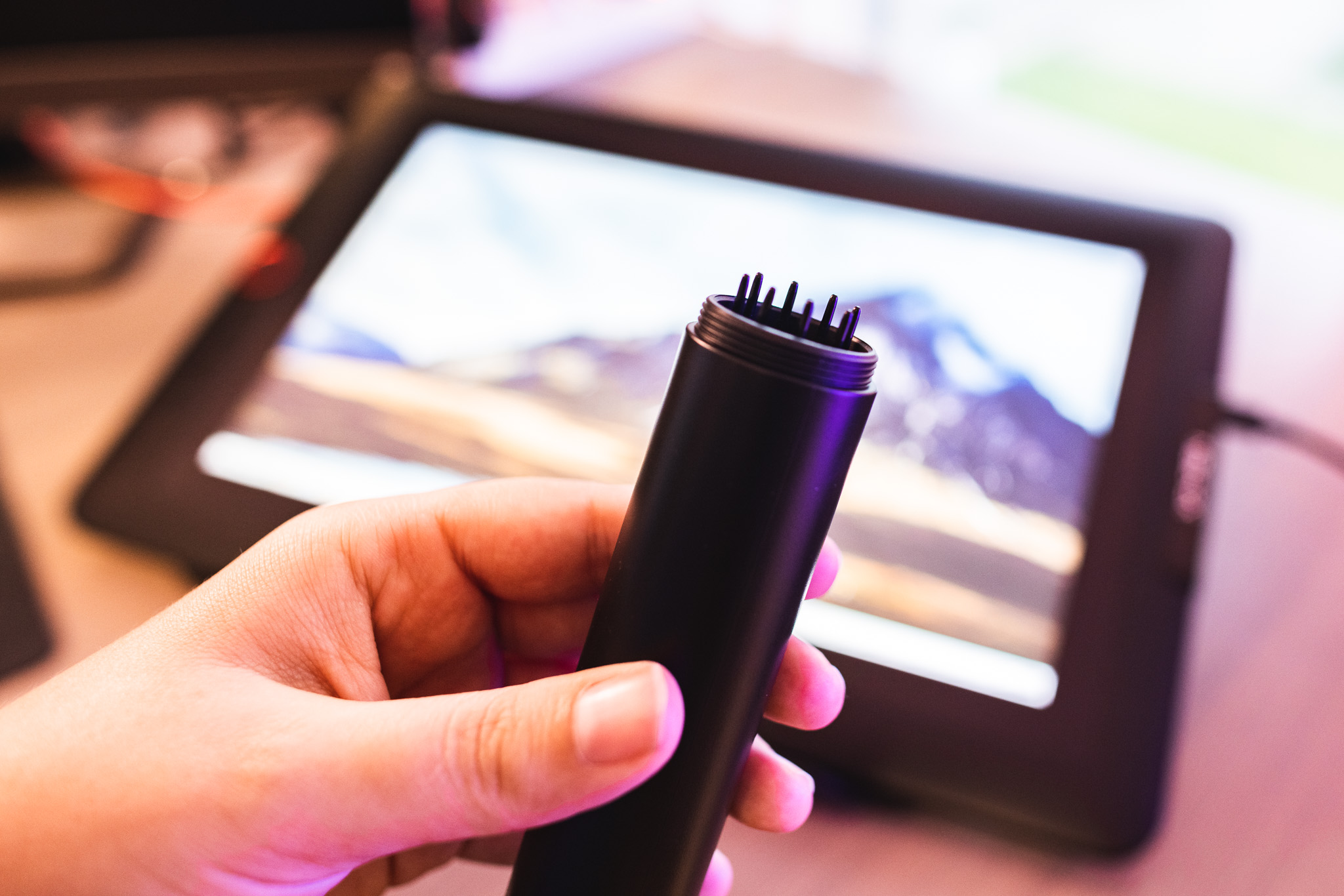 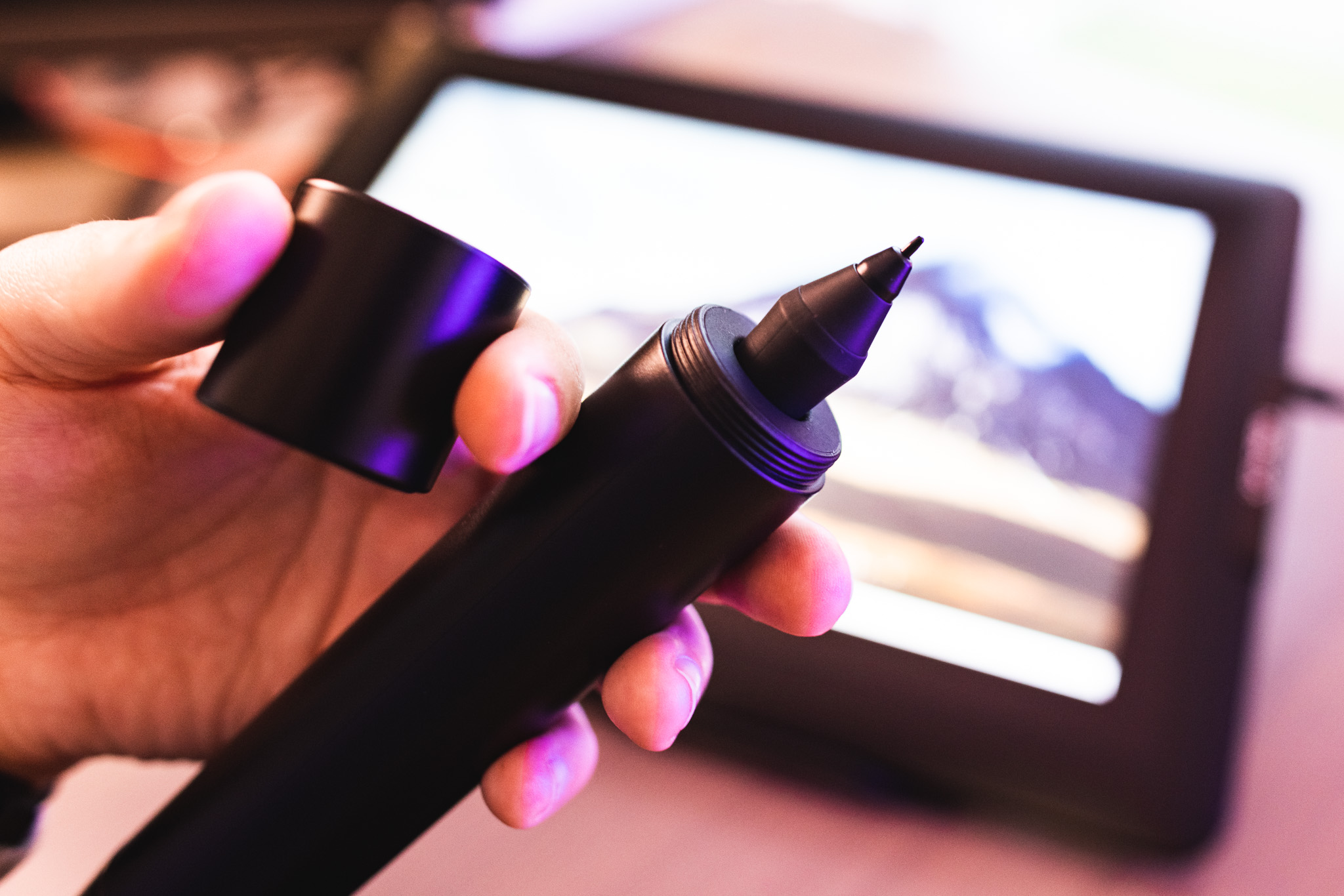 The XP-Pen Artist 15.6 Pro has eight shortcut keys (express keys) and one wheel that you can assign as you wish - even uniquely per program. I didn't make a lot of use the keys in the beginning as I was too focused to play around with the pen. However, I can totally recommend making a habit out of using the shortcut keys as they make using the tablet much more effective and fun as you can have your whole body posture focused on the tablet instead of having moving one hand over to the keyboard.

So far I have not changed the keys myself as I found the defaults for Photoshop very fitting (space - for navigating the file -, undo, zoom in, zoom out, brush tool). 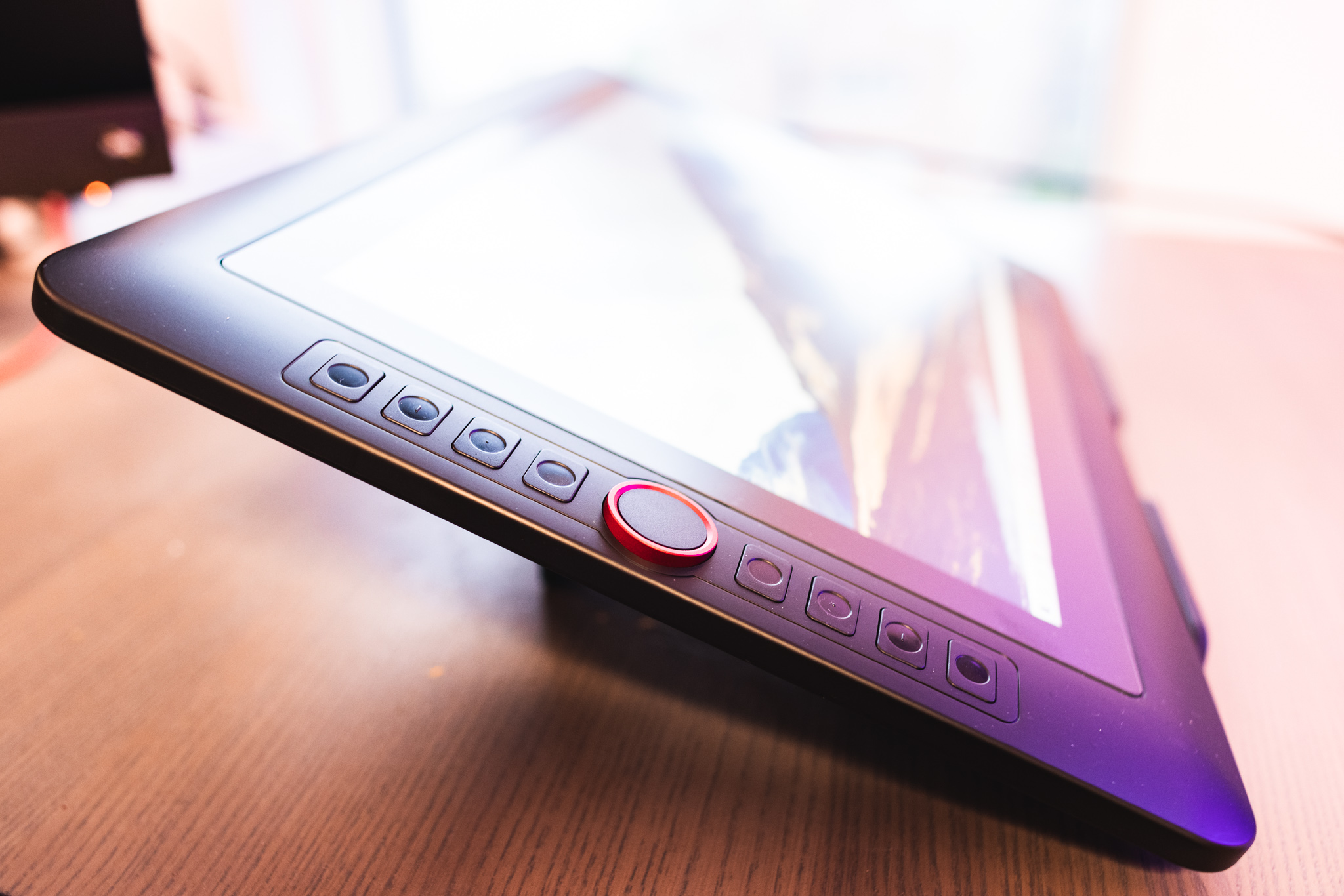 With the tablet comes a stand for a more comfortable wrist position. I really enjoy the stand - be aware that it might need a little push to reach the full angle. The first many uses I didn't flip it out fully which resulted in the stand folding in on itself if I pushed the tablet a little too much. Since applying a tiny bit of force to fully extend the stand, it hasn't happen anymore. 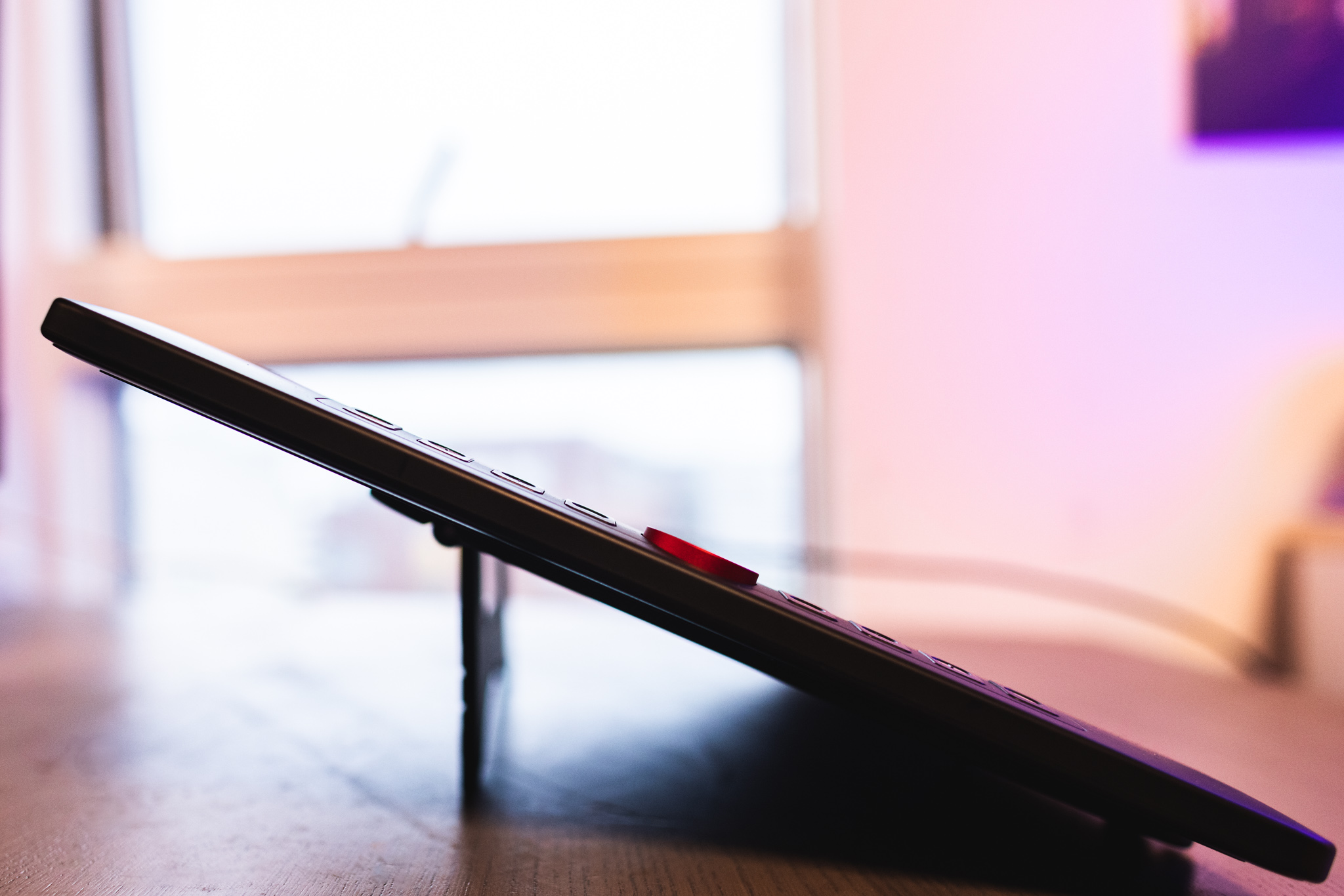 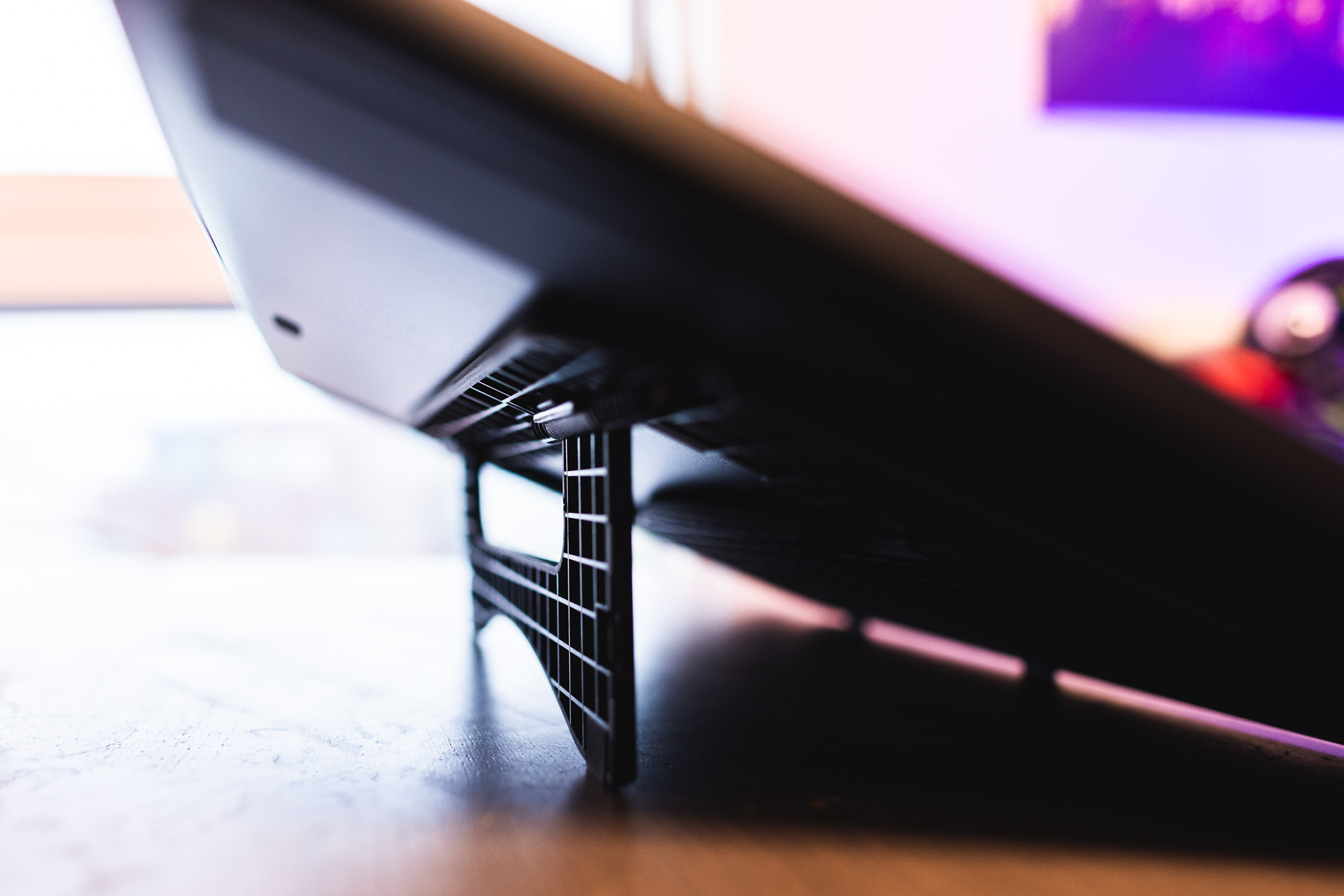 When I had decided to buy a drawing tablet by XP-PEN I still had to consider the size of the tablet I wanted to go with. 15.6 was the most mentioned one in above mentioned social bubble, however, I very much eyed the Artist 13.3 Pro* which was just a tad smaller but still very interesting in general.

In the end I went with the 15.6 with the thought

What the hell, if you're going to buy a fucking drawing monitor, you can at least go all in. Don't want to be money on this and then take out the reading glasses, don't you?

I must say: the 15.6 is big. It shocked me a little bit how big it is. If you have the desk space for it, I would recommend to go with the XP-PEN Artist 15.6, however I imagine that XP-PEN Artist 13.3st be an absolutely fine size as well if you don't have the space.

Here is a banana for scale: 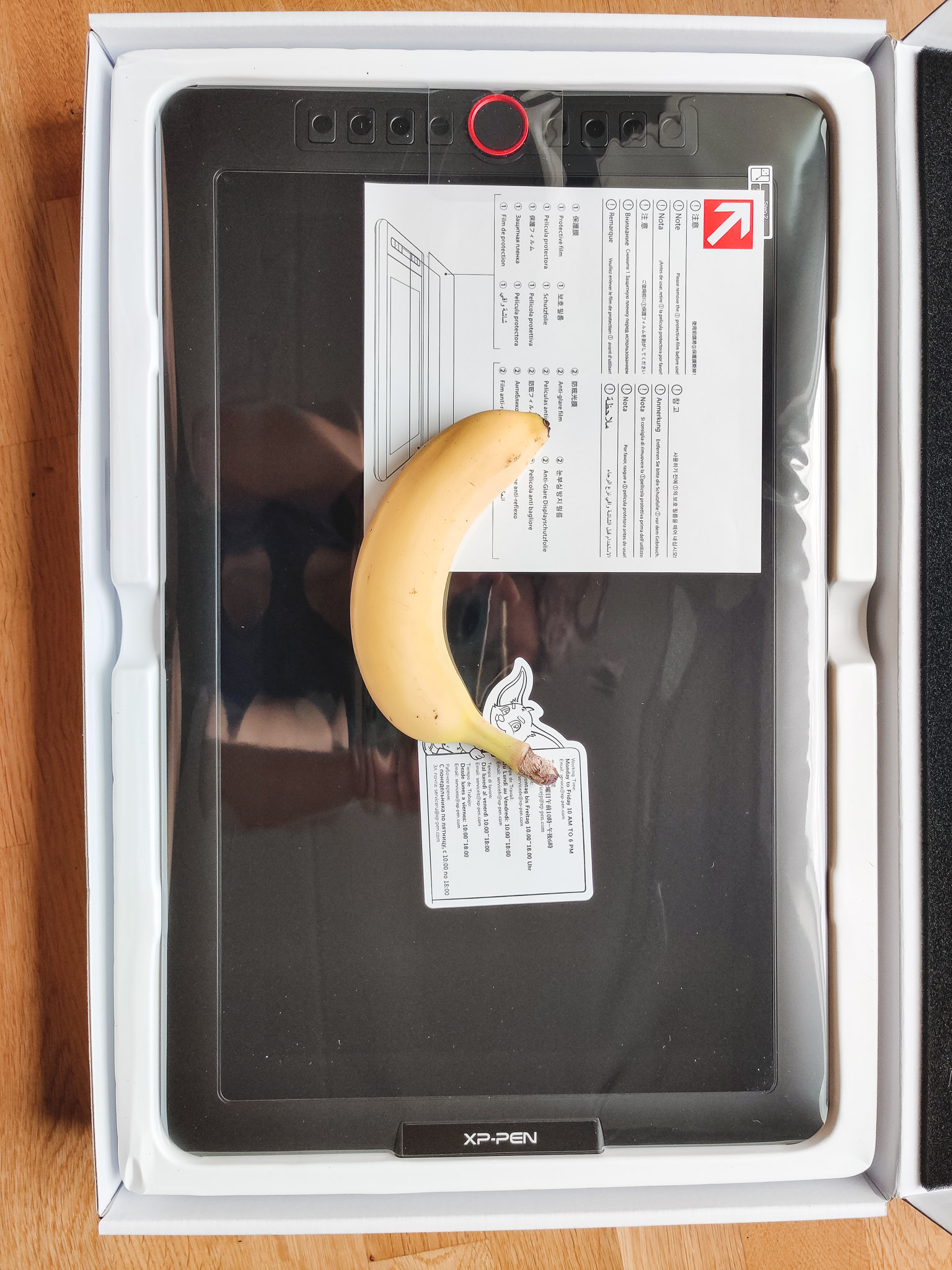 Coming from a regular drawing tablet, finally using one with a built-in screen is a lot of fun! Actually being able to see your hand and looking directly at what you're doing adds a lot more precision and satisfaction to your work.

Out of the box the tablet works very well for illustration and digital paintings, which most often is the use case for the tablet. It's snappy and fast in Proshop and the pen pressure is a lot of fun to play around with. Keep in mind, though, that I'm not an illustrator or digital painter and haven't done any big fancy things when trying this out. The use with Lightroom is less optimized out of the box and initially I wasn't very impressed. Lightroom can be sluggish in itself, and somehow it felt even more sluggish when using the XP-PEN Artist 15.6 Pro.

Here is a gif that illustrates the struggles. Every time the cursor seems to just be stil, I'm actually pressing it on the screen trying to drag the slider: 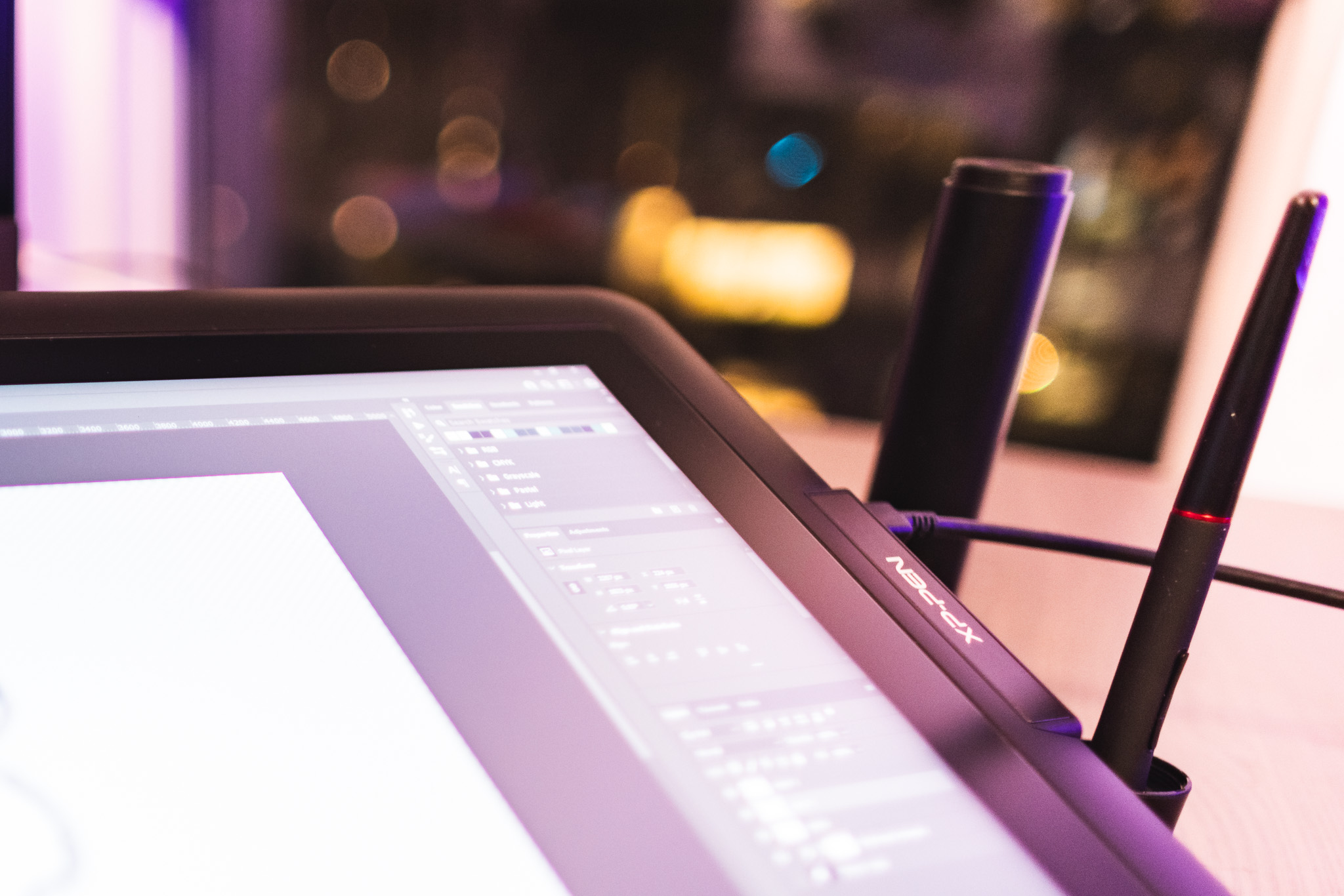 I found out that my initial bad experience with Lightroom was rooted in the pen not always feeling very responsive and me having to tap and drag multiple times before Lightroom would react. However, this improved majorly when I changed the default pen pressure to a more sensitive setting. Using the pen immediatly felt as snappy and fast as Photoshop (in the boundaries of how snappy and fast Lightroom can be ...). 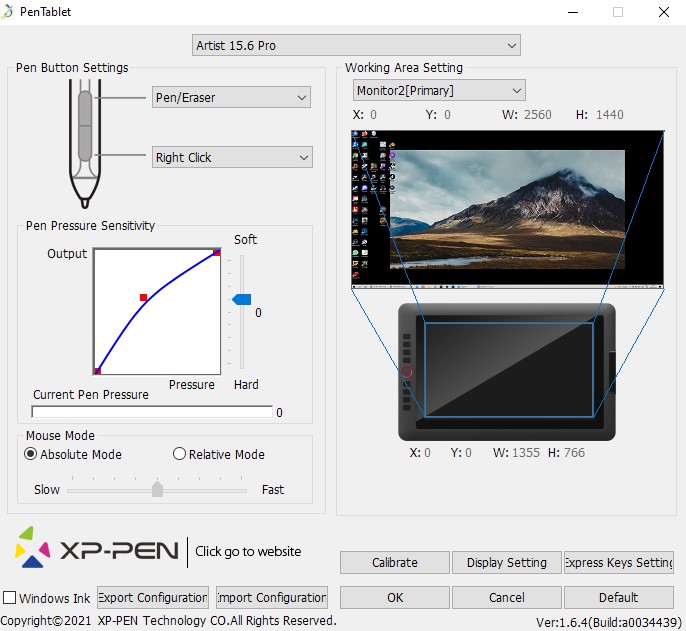 As the XP-PEN Artist 15.6 Pro functions as a monitor, you can calibrate it like a regular monitor both with Windows' own calibration possibilities and specific software. If you notice that the colors of your photos look significantly different on the tablet compared to your other monitors, it's recommendable to adjust them to be more aligned. 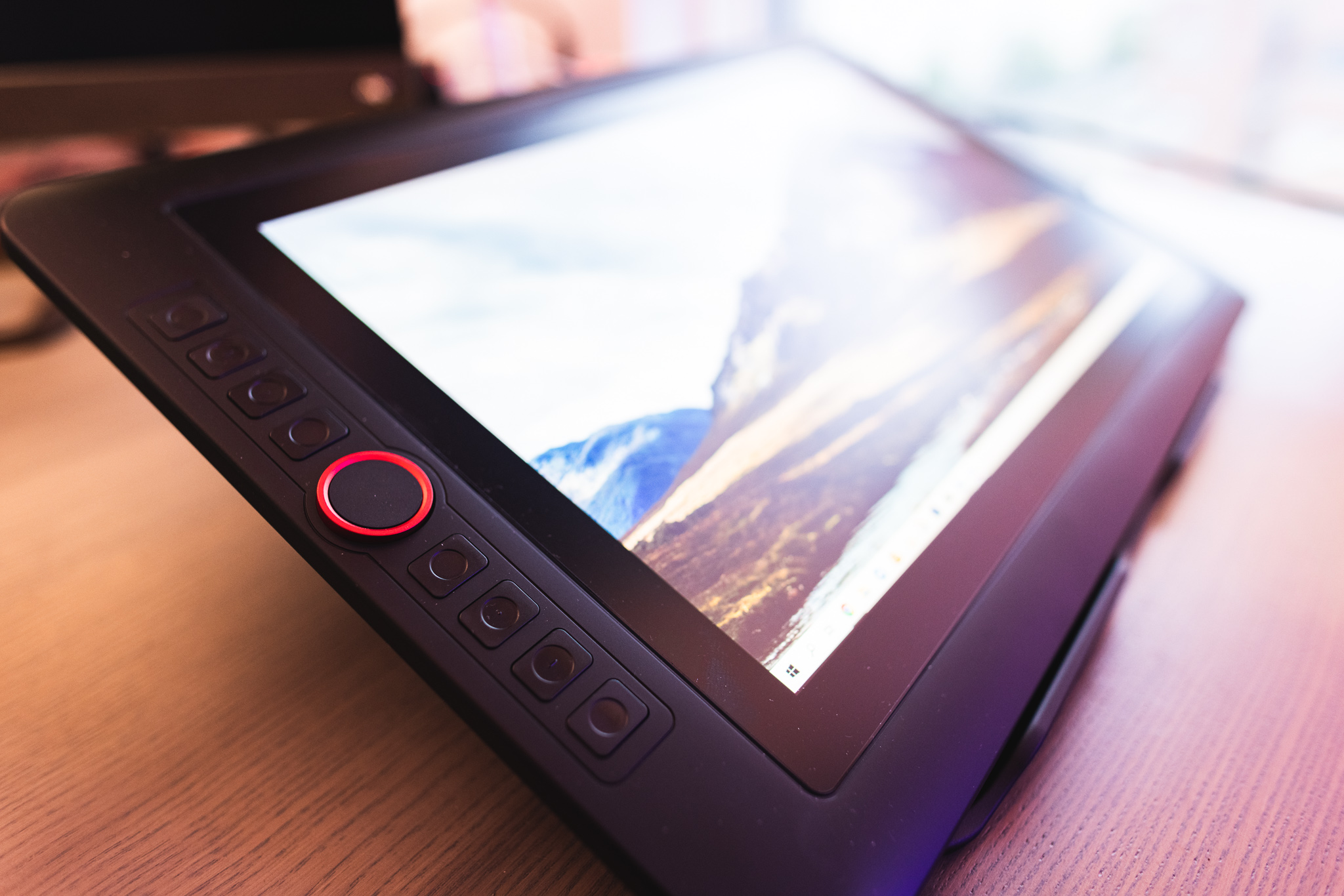 As conclusion, I am generally happy with the XP-PEN Artist 15.6 Pro and can recommend it if you are looking for drawing tablets with built-in screen and have the desk space. If you always only use Lightroom without a lot of brush work, a regular drawing tablet (without built-in screen) might be more than enough for you, but especially if you do advanced editing and photo manipulation might improve your workflow.