We both love animals. We enjoy cuddling and playing with them, and of course taking pictures of them. However, like with babies and small children, taking pictures of animals can be quite a challenge. And depending on where you take the photos, you face different kind of challenges.

Luckily, there live a lot of dogs around here (sadly, we haven't spotted any cats yet). Until now, two dogs have visited our studio: Nora, a young Australian Shepherd, and Kenzo, a Chihuahua-Pomeranian-mix puppy. Both dogs are absolutely adorable and fluffy.

We have a few pictures of dogs in nature that we can show off. However, we also wanted to try a whole different situation: in the studio. Both situations - in the studio and outside - come with their own challenges.
Outside, the dog (or any other animal, of course) has the space to be exactly where they are comfortable. If they don't like strangers, they can keep their distance. They are not in a foreign territory, they are not confined to a certain space. Also, these photoshoots tend to evolve around playing and running around, capturing the dog's nature in the safe environment. On the other hand, there is always the risk of the dog running around too much and there being difficult to actually capture. Also, you are dependent on weather and light conditions. 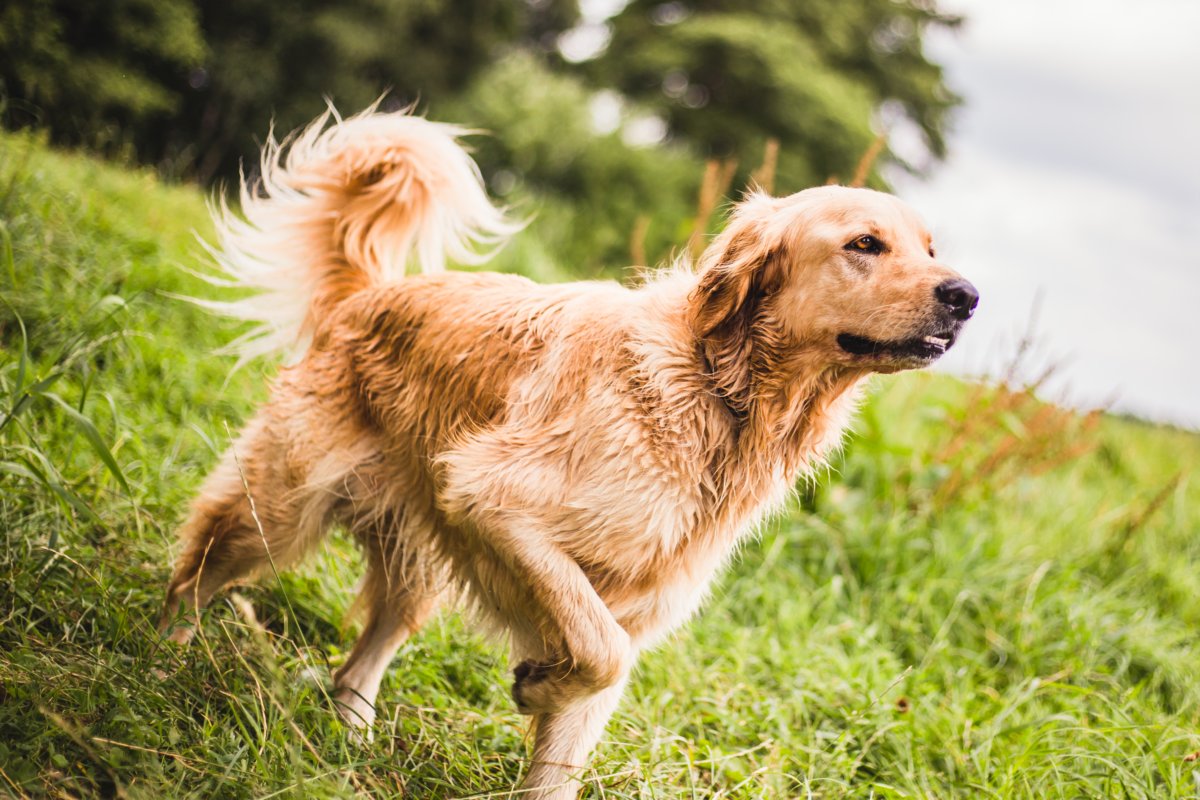 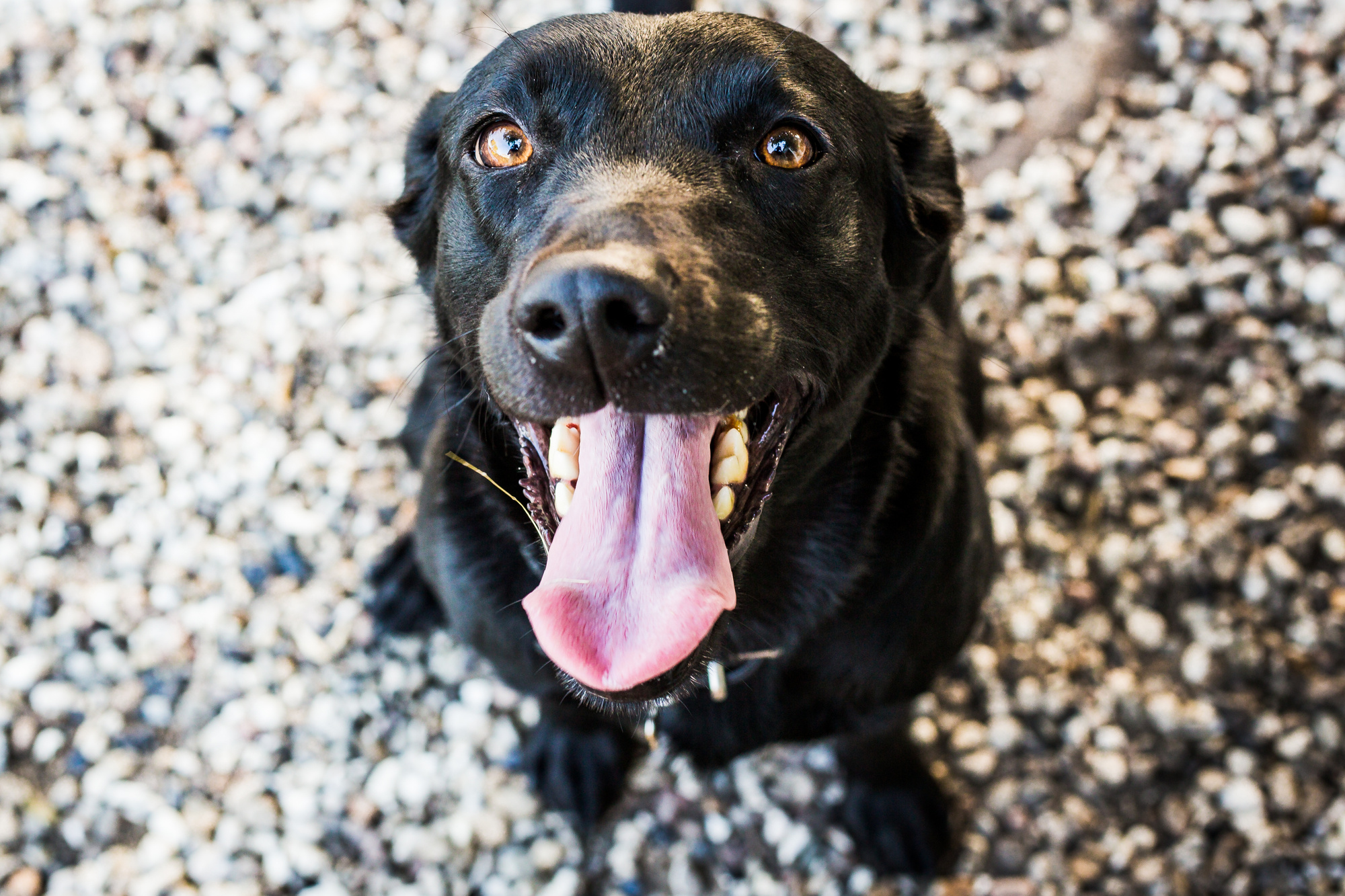 In a studio, you get a picture with a more clinical atmosphere, with mainly the dog's personality being the crucial factor for the quality of the photo. If you have a lot of pictures lit in the same way with the same background, only the dog's different positions, movements and faces seperate the pictures from each other. However, the dog is also in foreign place with weird thingies everywhere and not much place to run of its energy - or at least not without breaking anything. Also, some dogs are fine with flash lights, some are not. 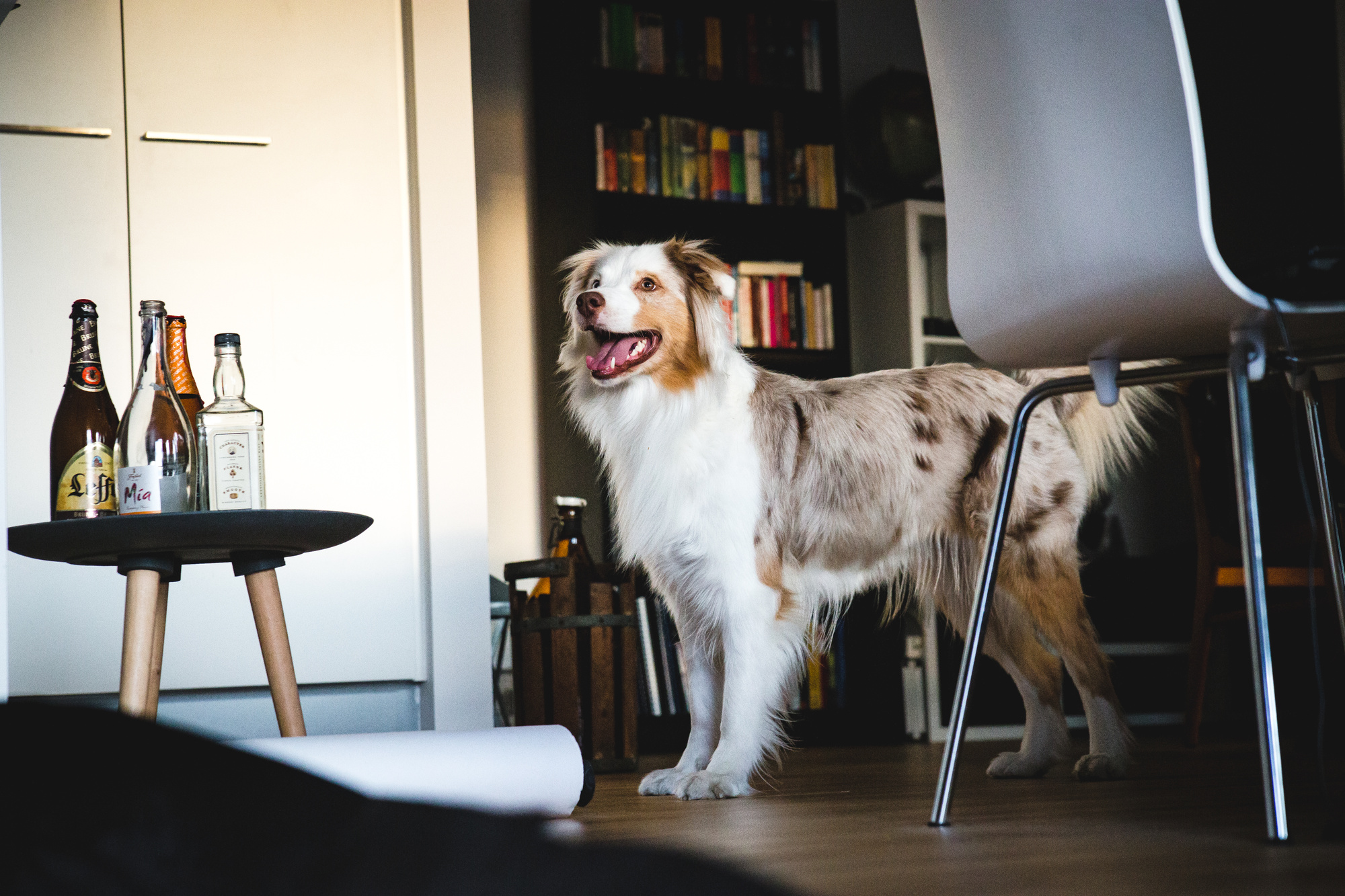 Nora was the first one to visit us. She is a very curious, quirky dog that explored the whole apartment before we could blink - which is totally adorable. We spent a lot of time cuddling and talking to make her feel safe.

Her eyes are of different colors and her posture is pretty majestic, which was perfect for the pictures. 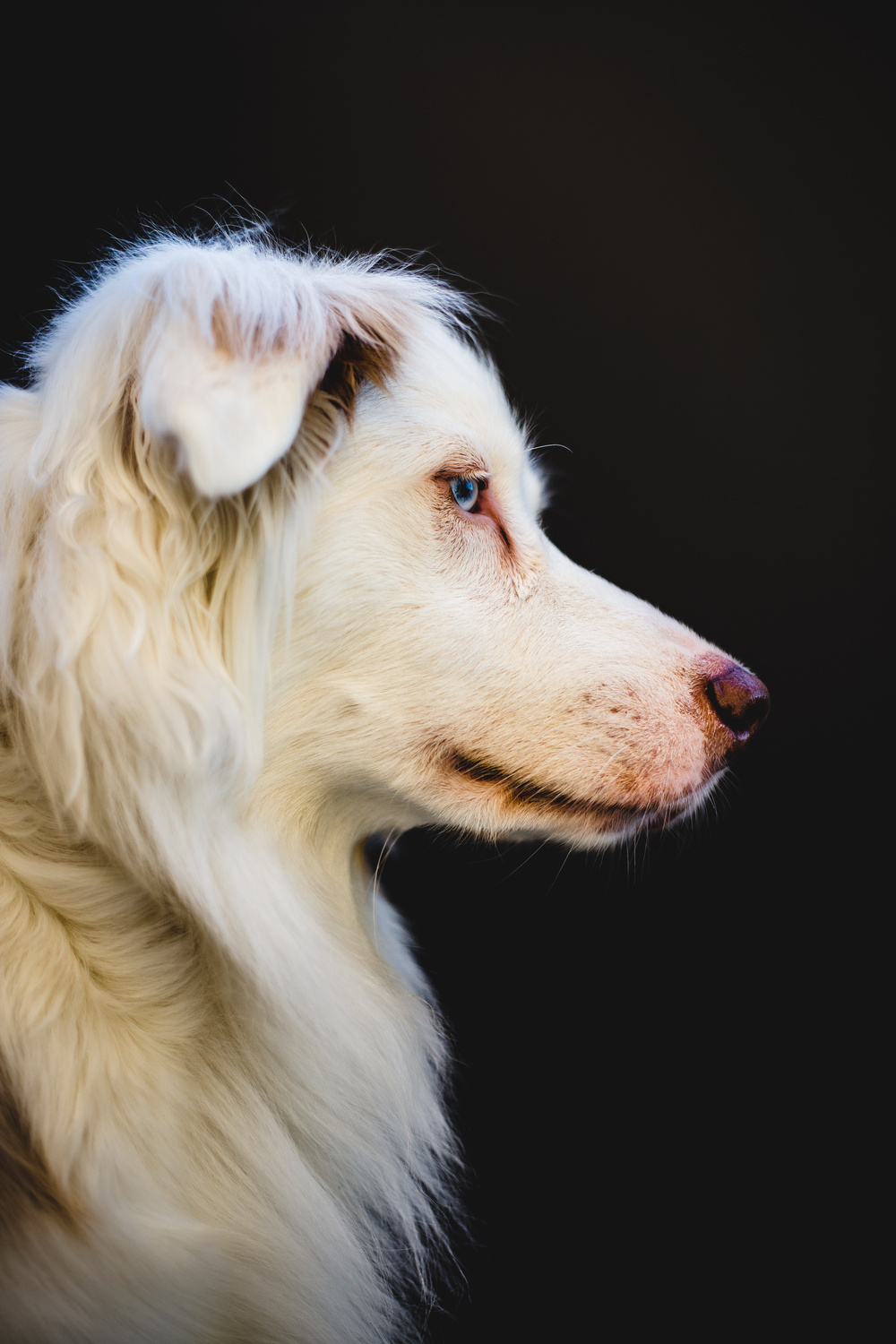 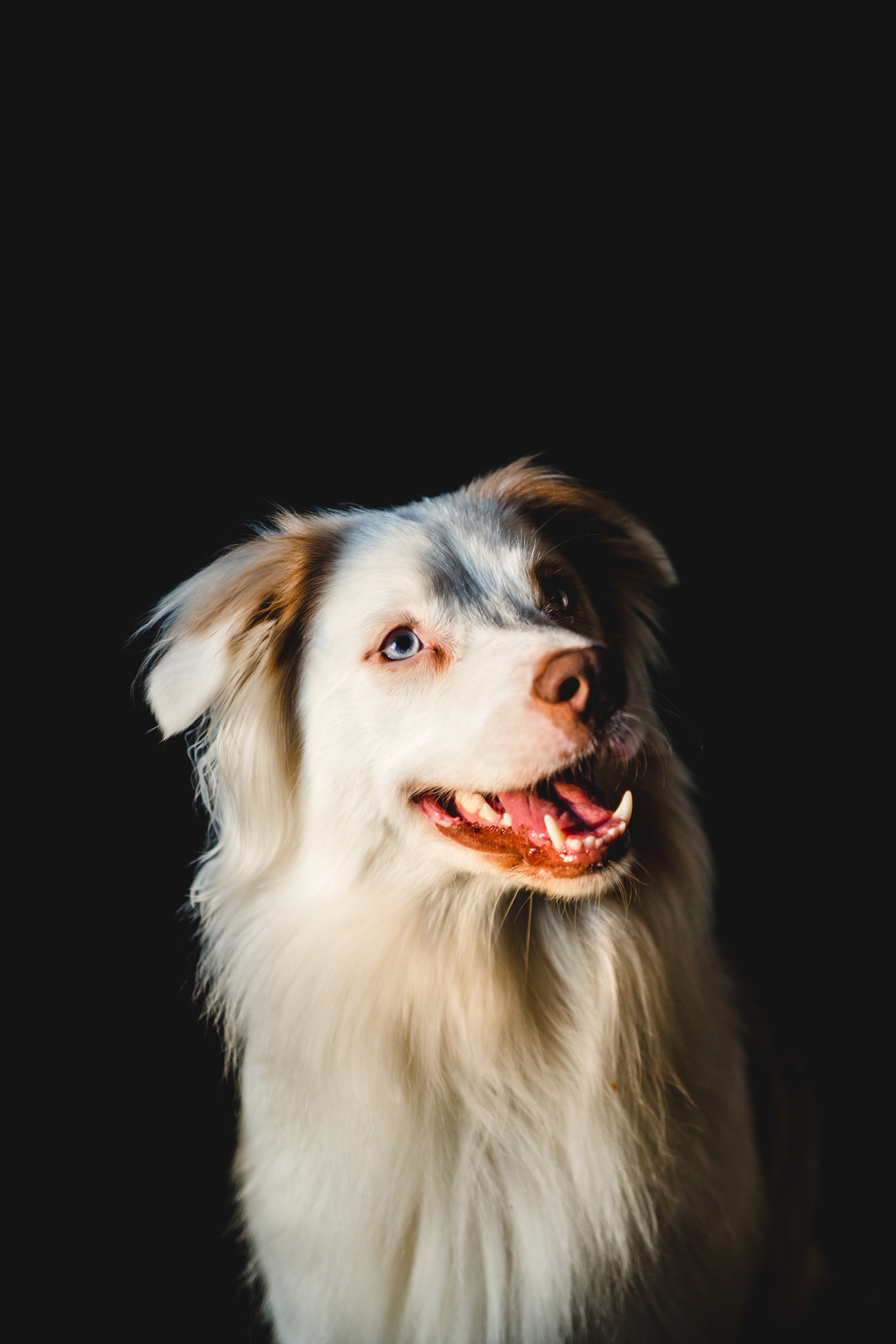 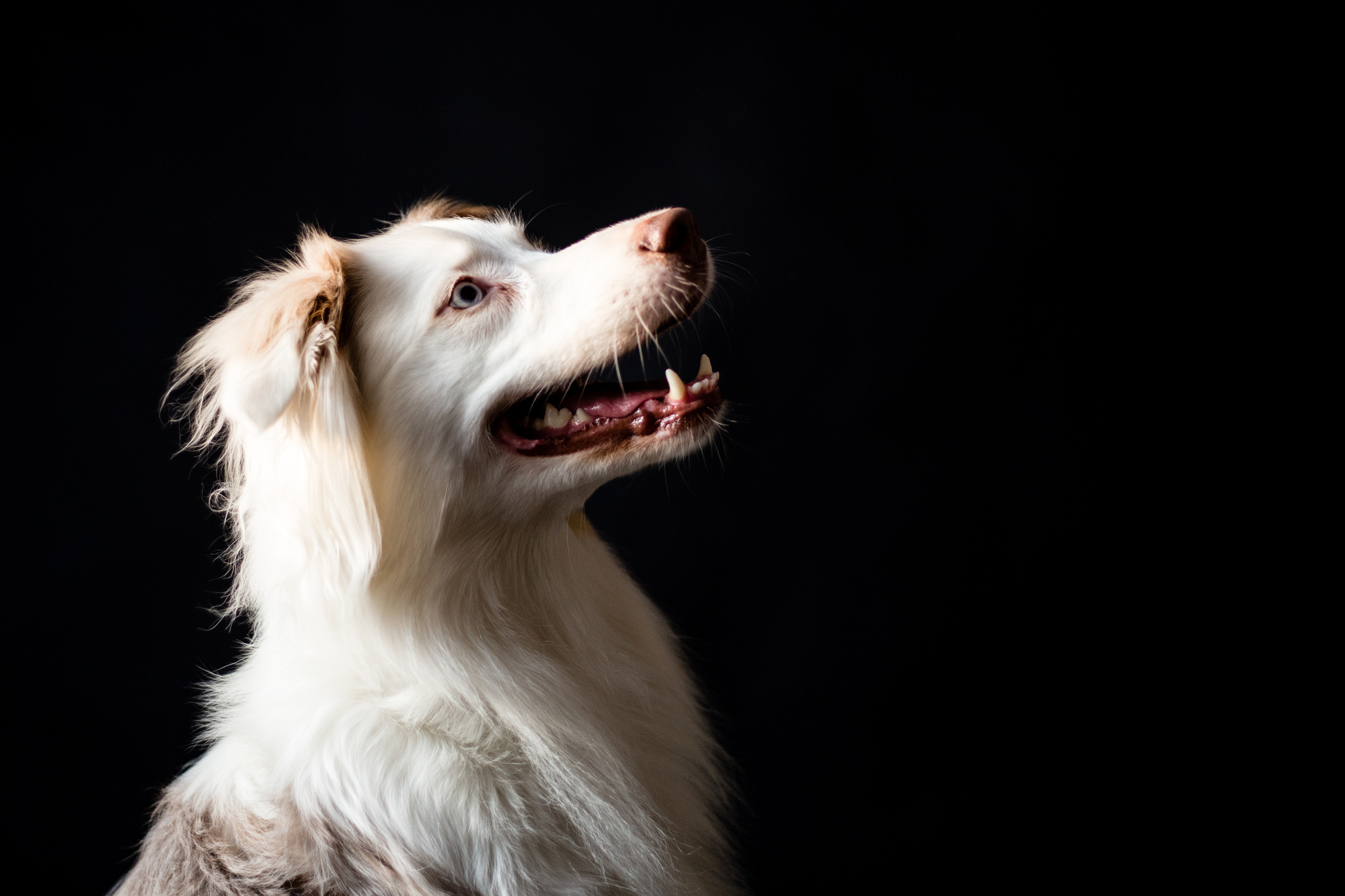 With Nora, we never tried to use flash. She was really quirky and was easily distracted, running off to other places in the apartment, that smelled far more interesting. Also, we weren't sure whether it would make her nervous. As she is one of our neighbors, we just settled with playing a little and snapping some pictures inbetween.

Treats and toys were of course a big motivation for staying put and should always be remembered at a photoshoot. 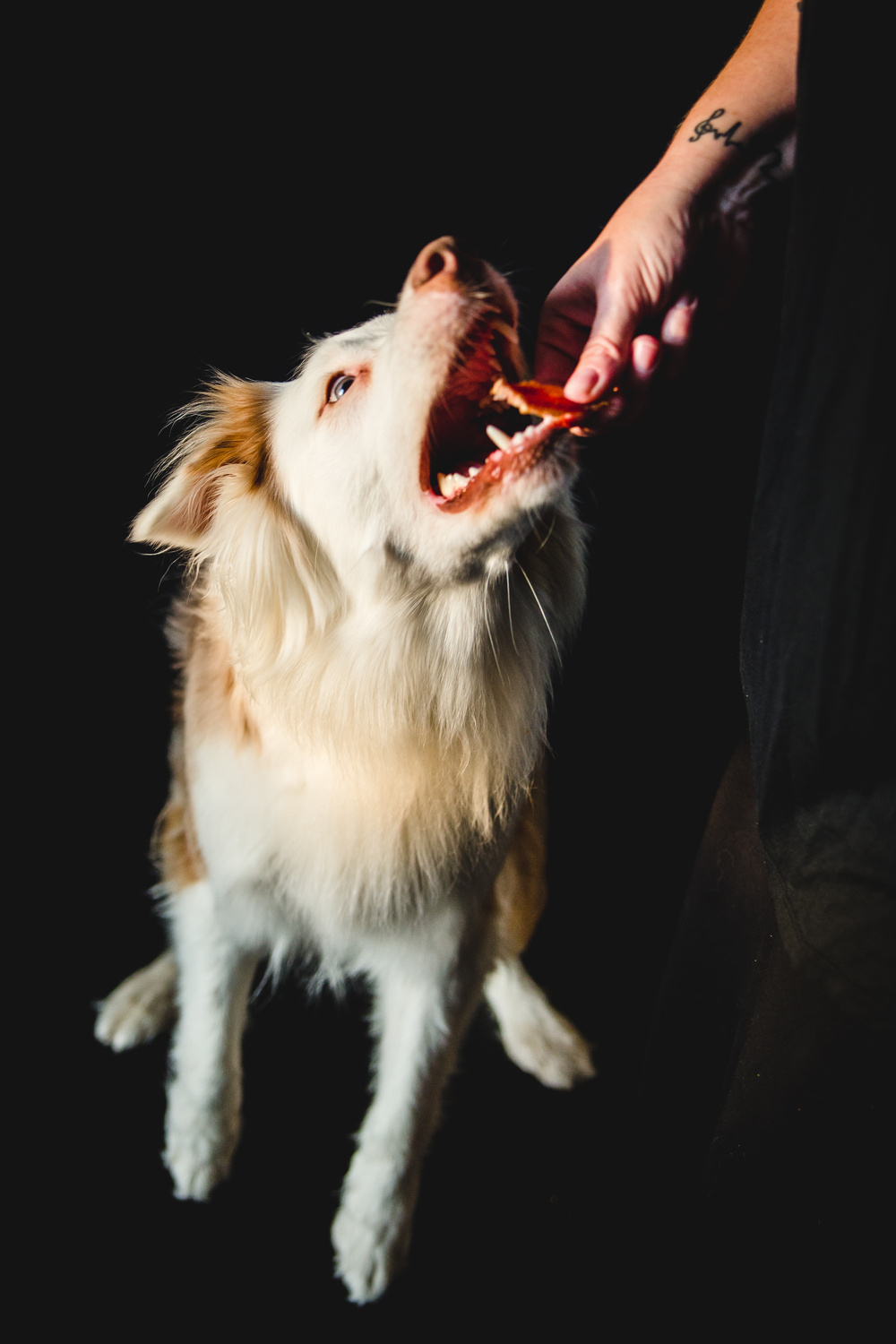 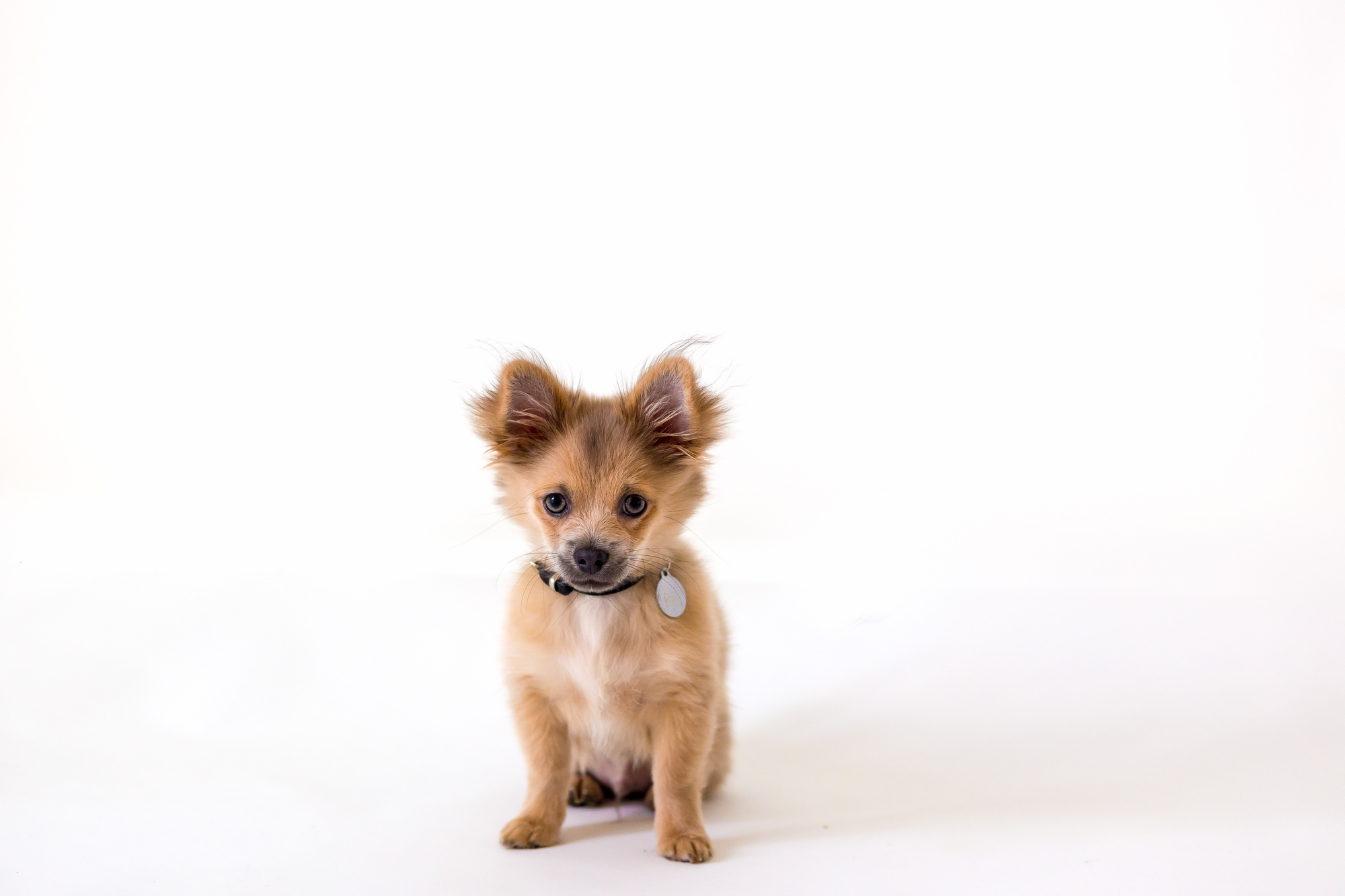 Kenzo is a 4,5-months old chihuahua-pomeranian-mix. As he is still a puppy, we didn't have high expectations to his training, but he did very well. Also, his size is a whole different league of managable compared with Nora, who is a grown Australian Shepherd.

With Kenzo we also spent some time on talking with the owners and giving him some serious cuddles (which he thanked with ear-biting and face-licking). Even though he got a little bit nervous because of the paper background in the beginning, he showed no sign of nervousness.

In the beginning, we took pictures without flashes to see how comfortable he would be. Also I knew now, that a dog also only has a certain concentration span which is to take advantage of. 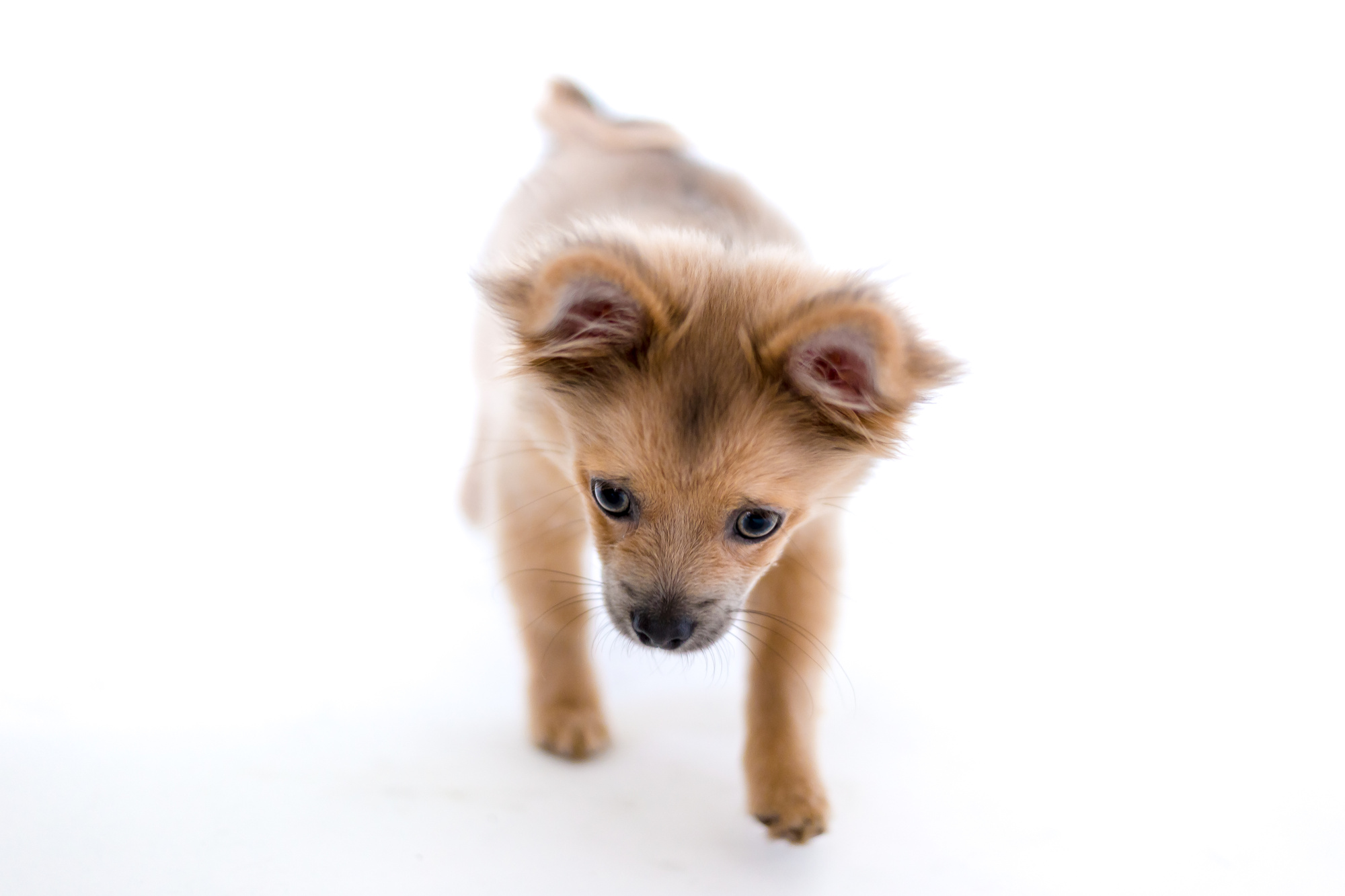 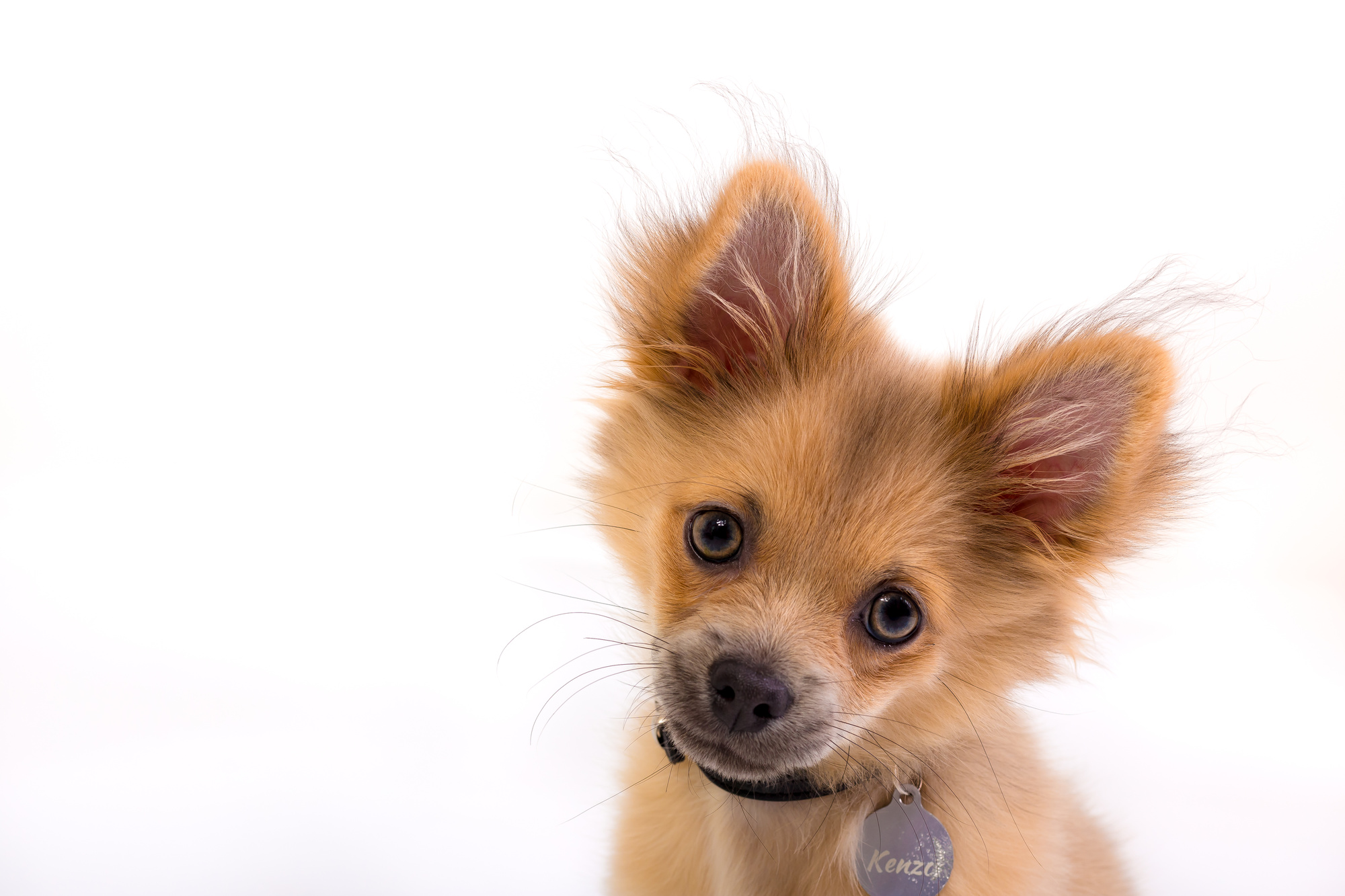 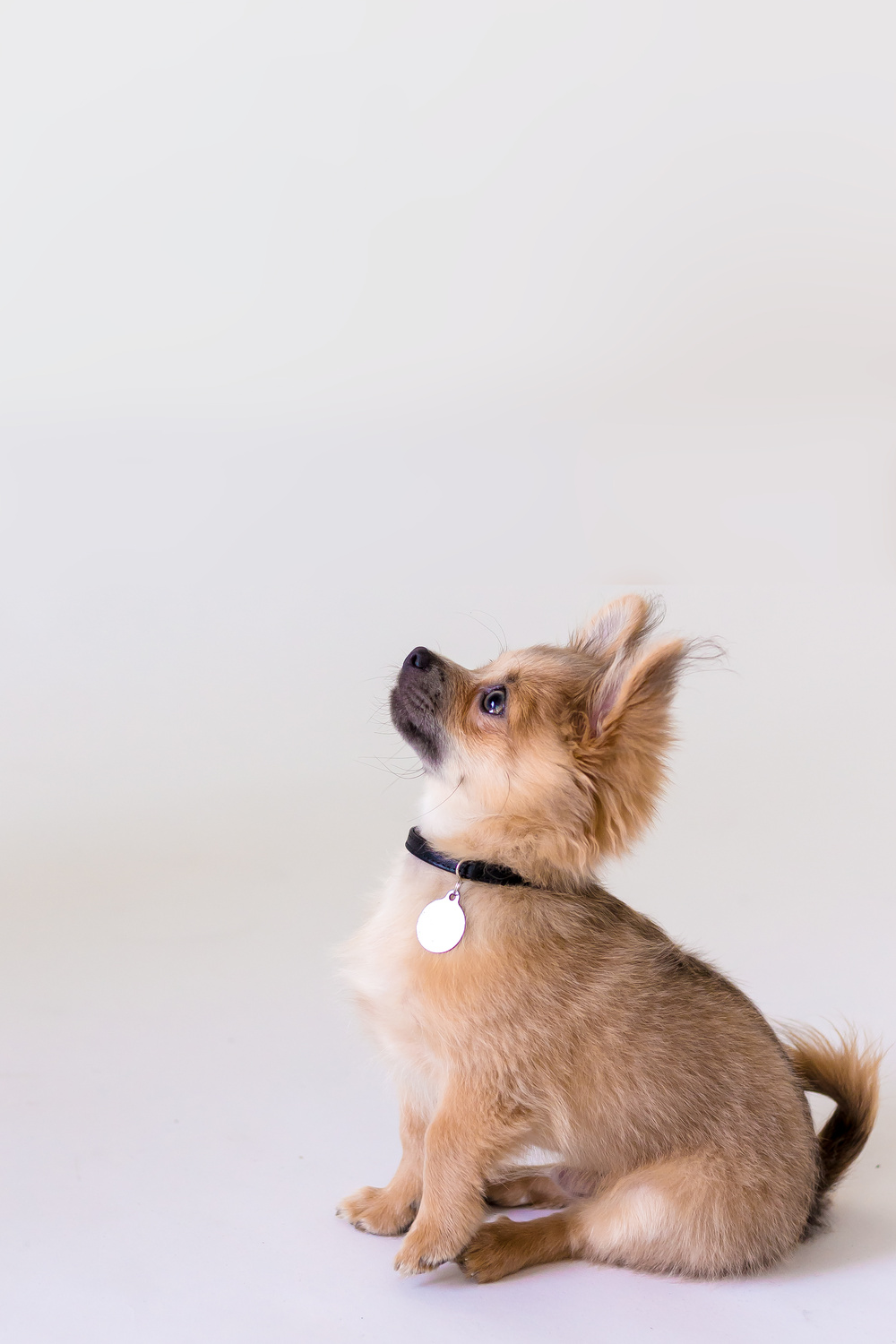 As he seemed pretty content, we turned on the flashes after some time. He didn't bother at all. Once or twice he caught the flash of light and looked around confused, but when he was focused on his treats, he didn't react at all. 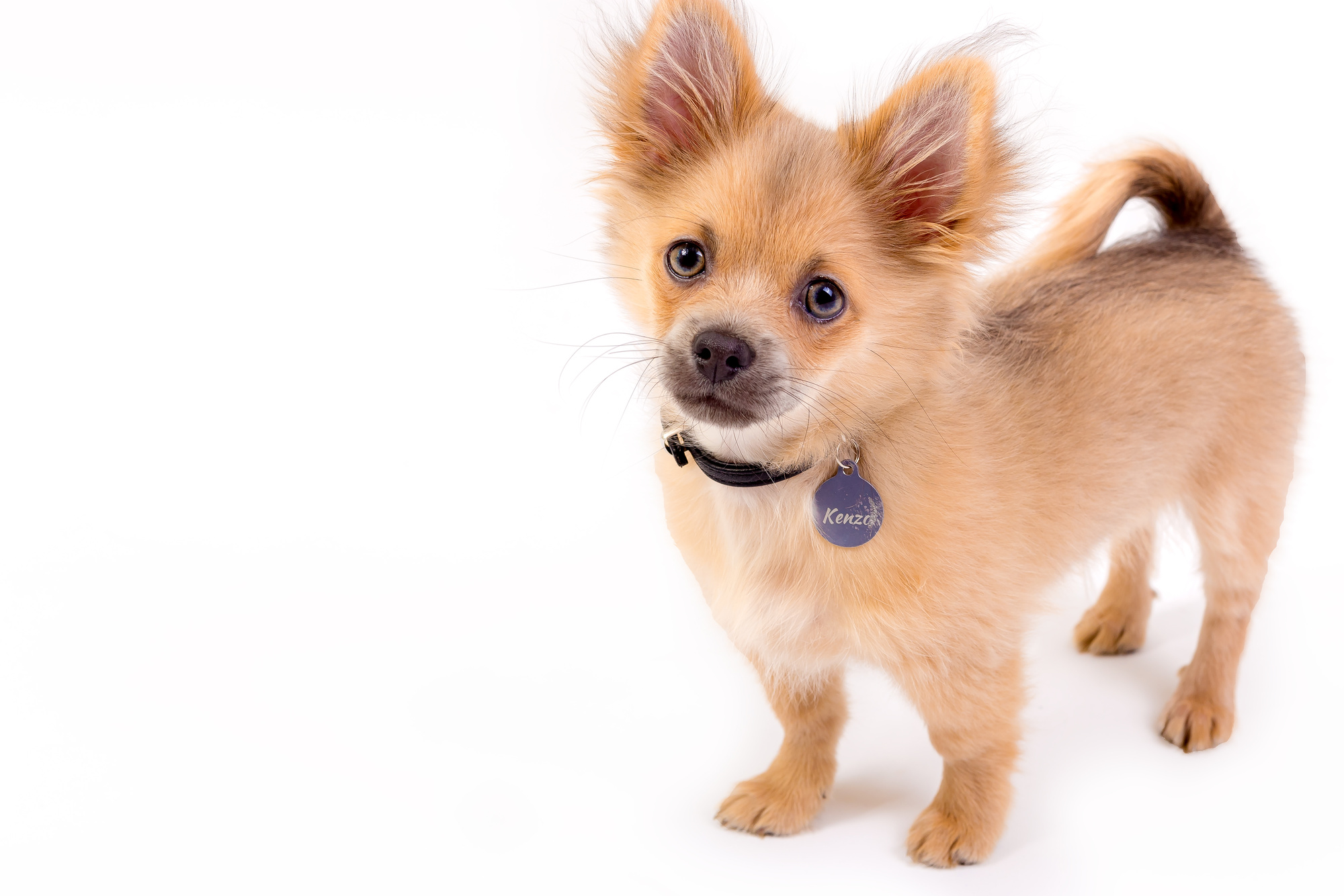 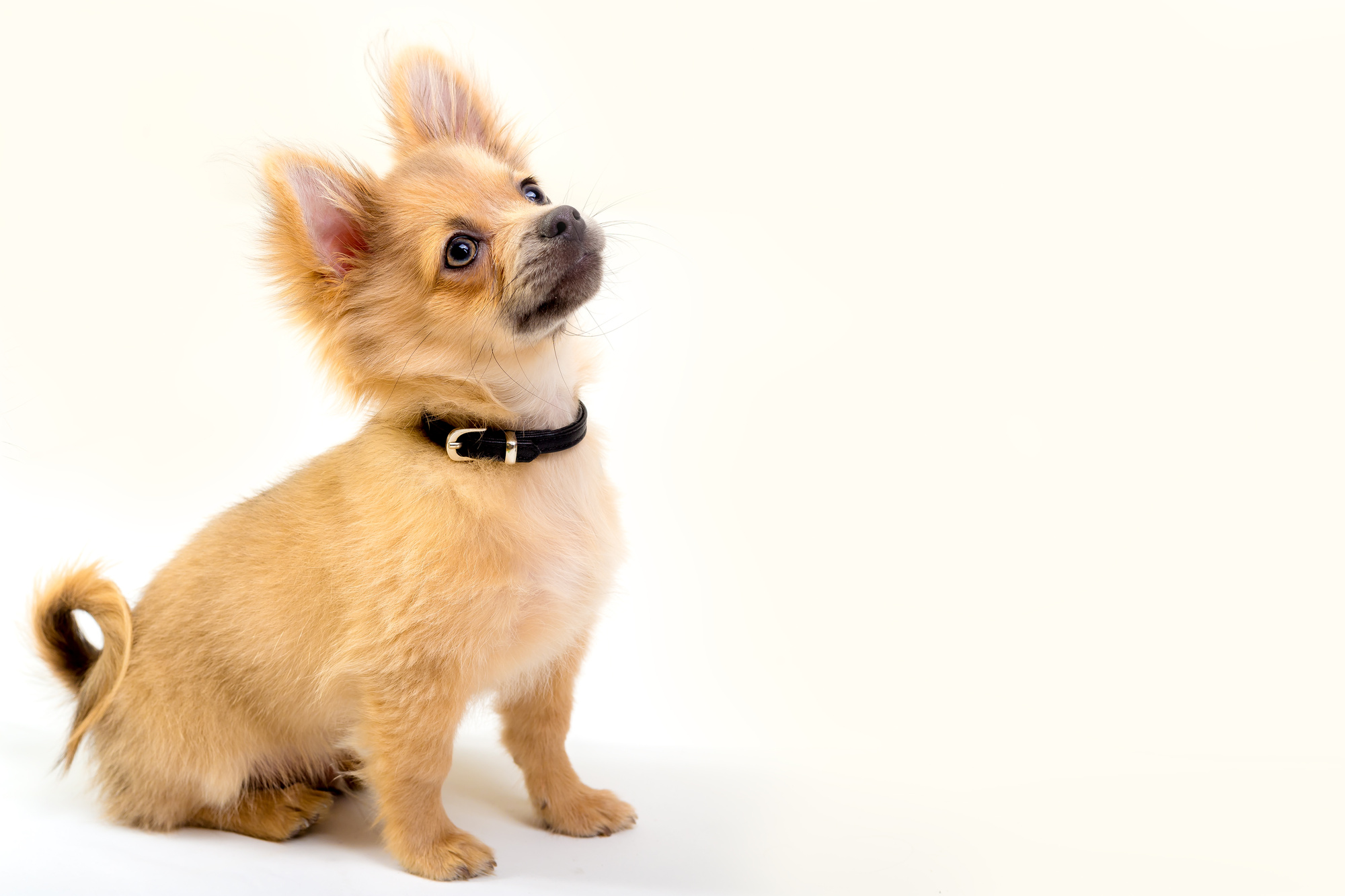 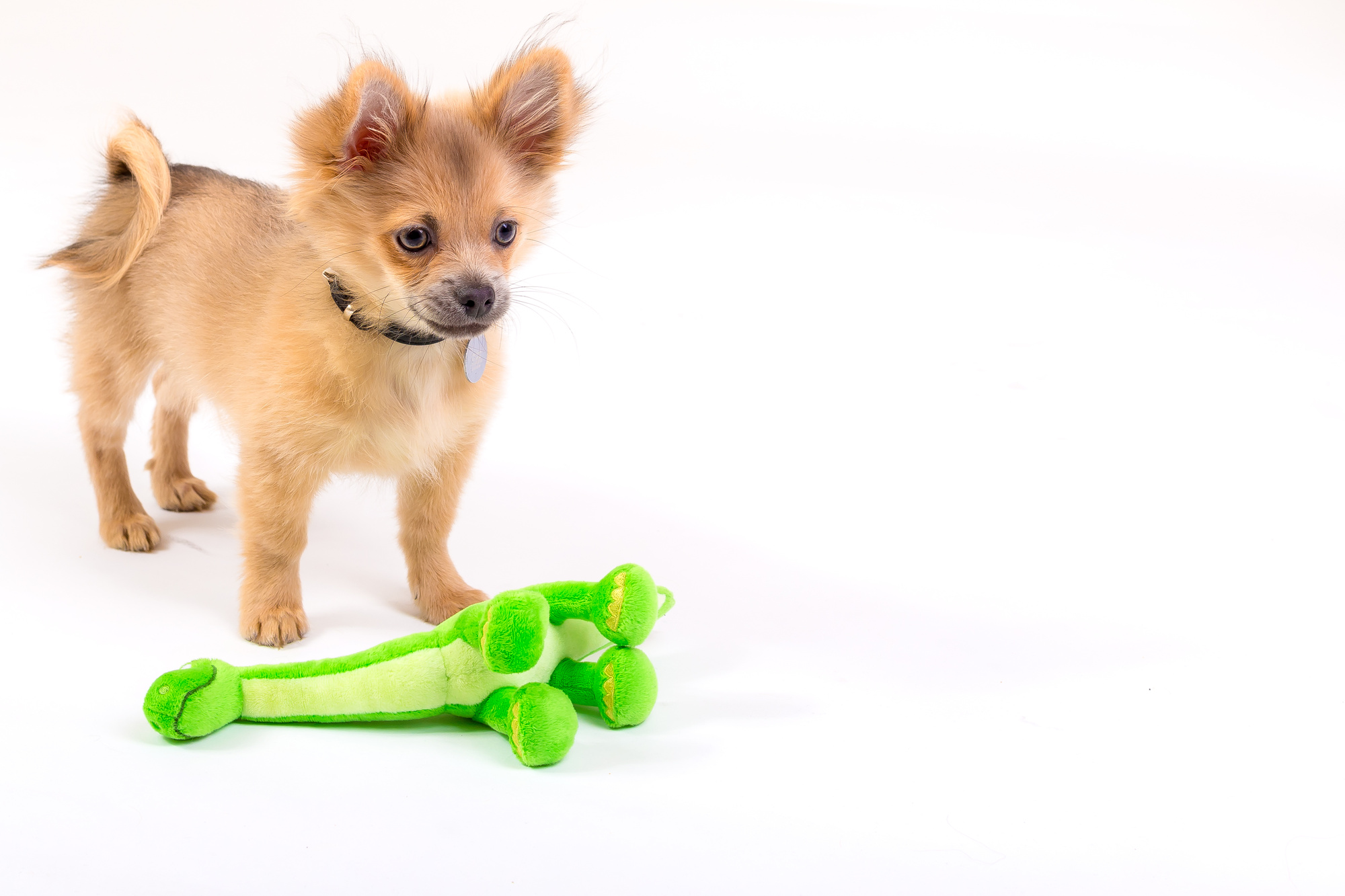 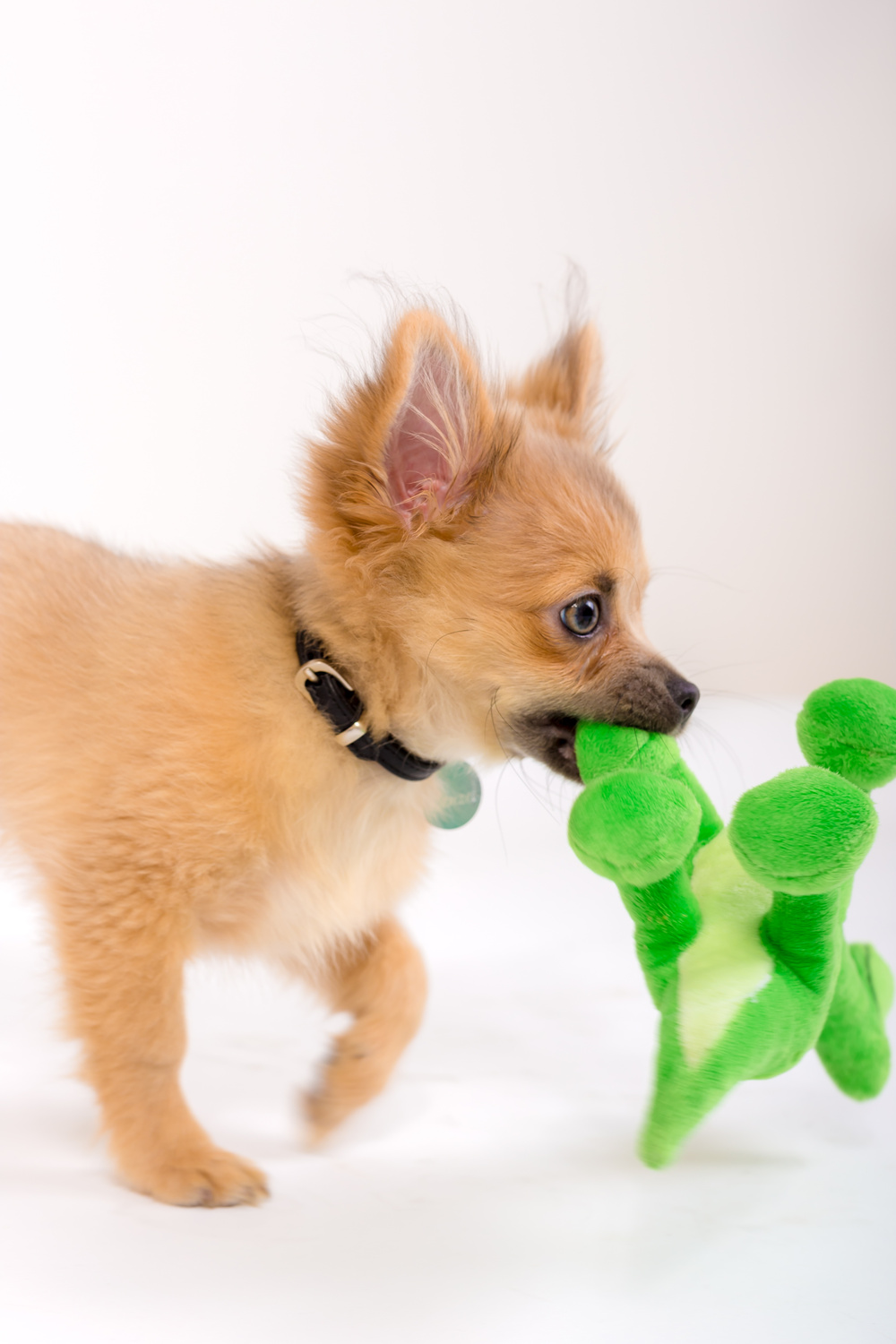 Small dogs are definitely easier to shoot. They are easier to handle, but also when they don't necessarily force me to shoot outside of the background paper.

Even though the photos only with natural light turned out good, I really like the look and feel of the photos taken with flash. It's as if every single hair gets highlighted and doubles the Fluff. On the other hand, the dog also needs to be comfortable with it. Also, you are even less mobile in terms of angles and perspectives when using flash.