I was out with Brian recently and we took some shots for his various social media channels. It was my first time shooting stills for something sports related, so I wanted to share what I learned and show some pictures of the shoot.

I first worked with Brian to shoot some video for one of the project he's involved in, doing trick shots and we had a three camera setup with Go-Pro in the goal, handheld video camera and my DSLR on a tripod. 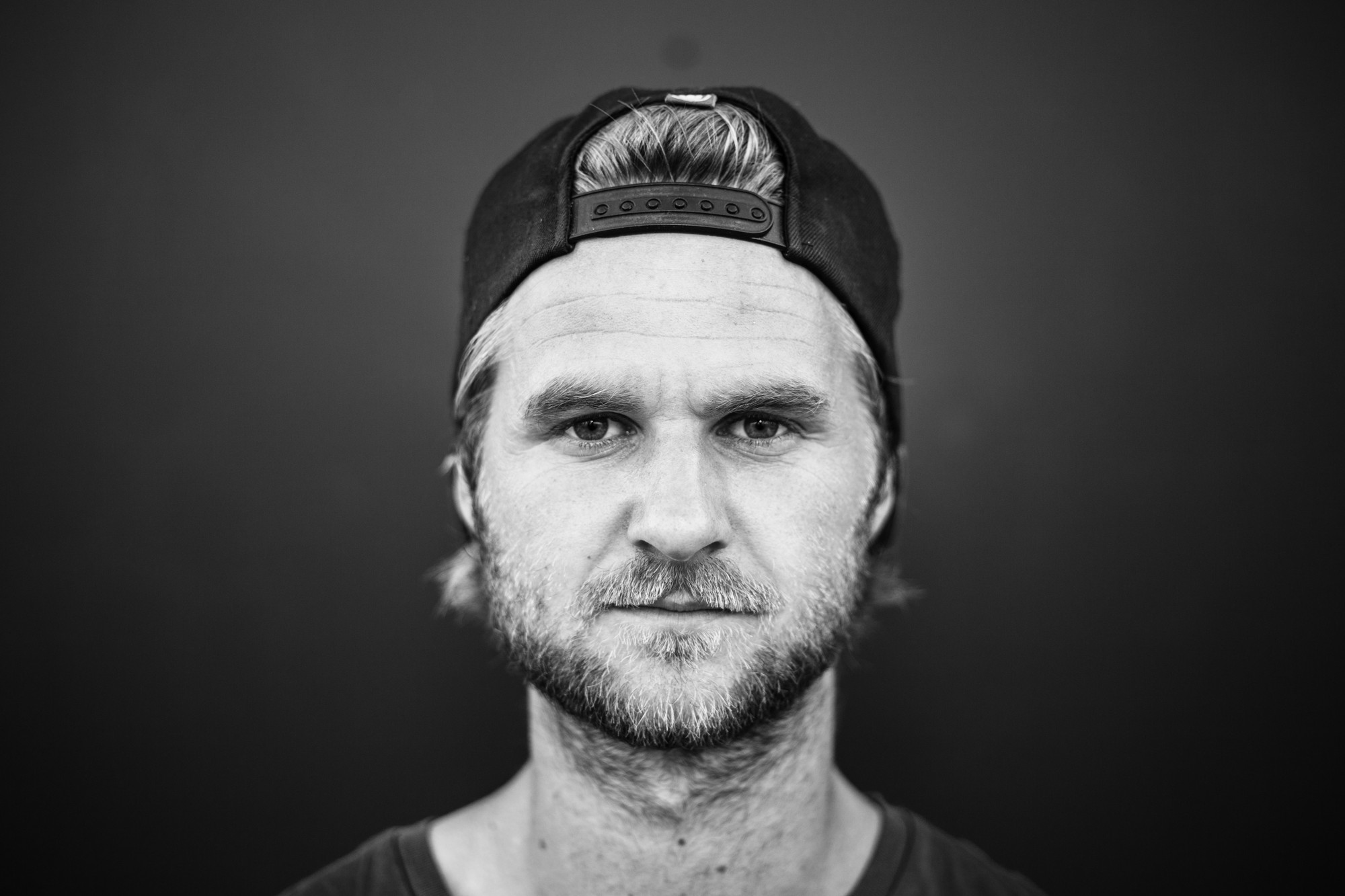 This time we set out to capture some more personal shots of him training, doing tricks and a few portraits. The whole shoot was a lot of fun and we went to the roof of a school that's nearby which has some pretty cool caged football courts on the top of the building. The whole shoot was pretty relaxed, Brian was super nice and occasionally tunneled some balls between my legs when we were just moving from spot to spot. Great to have a high energy and positive subject! ;) 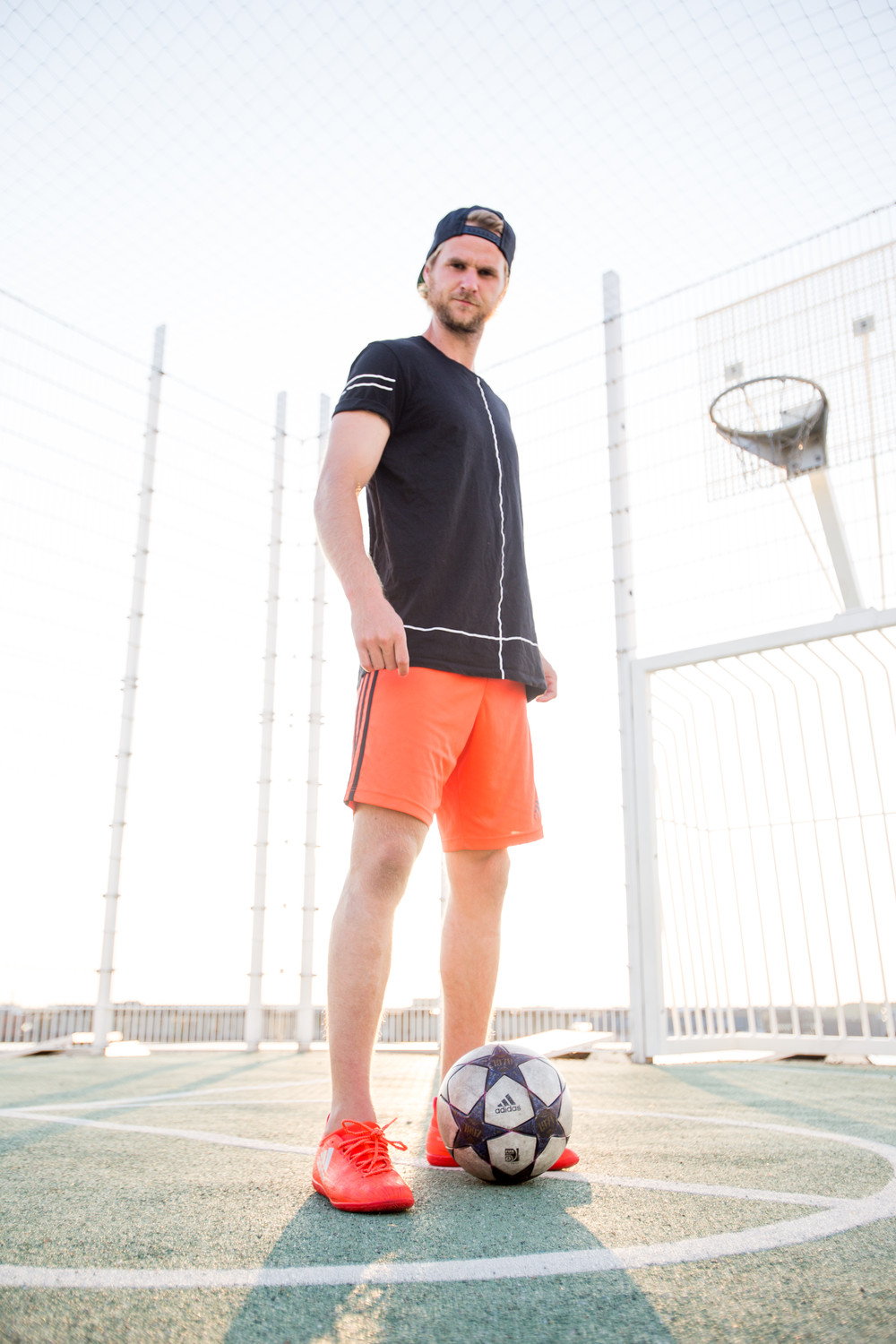 To be honest, I don't really know anything about football, much less about freestyle football and how hard any of the tricks are. I just know that I can't do any of it and I'm so far from it, that we had to communicate a lot about what kind of shots he wanted and which kind of shots would best illustrate his skill, so we spent a lot of time looking at the camera together. Things like "around the world" tricks can be done double or triple, but on a still picture, there is no way of telling. 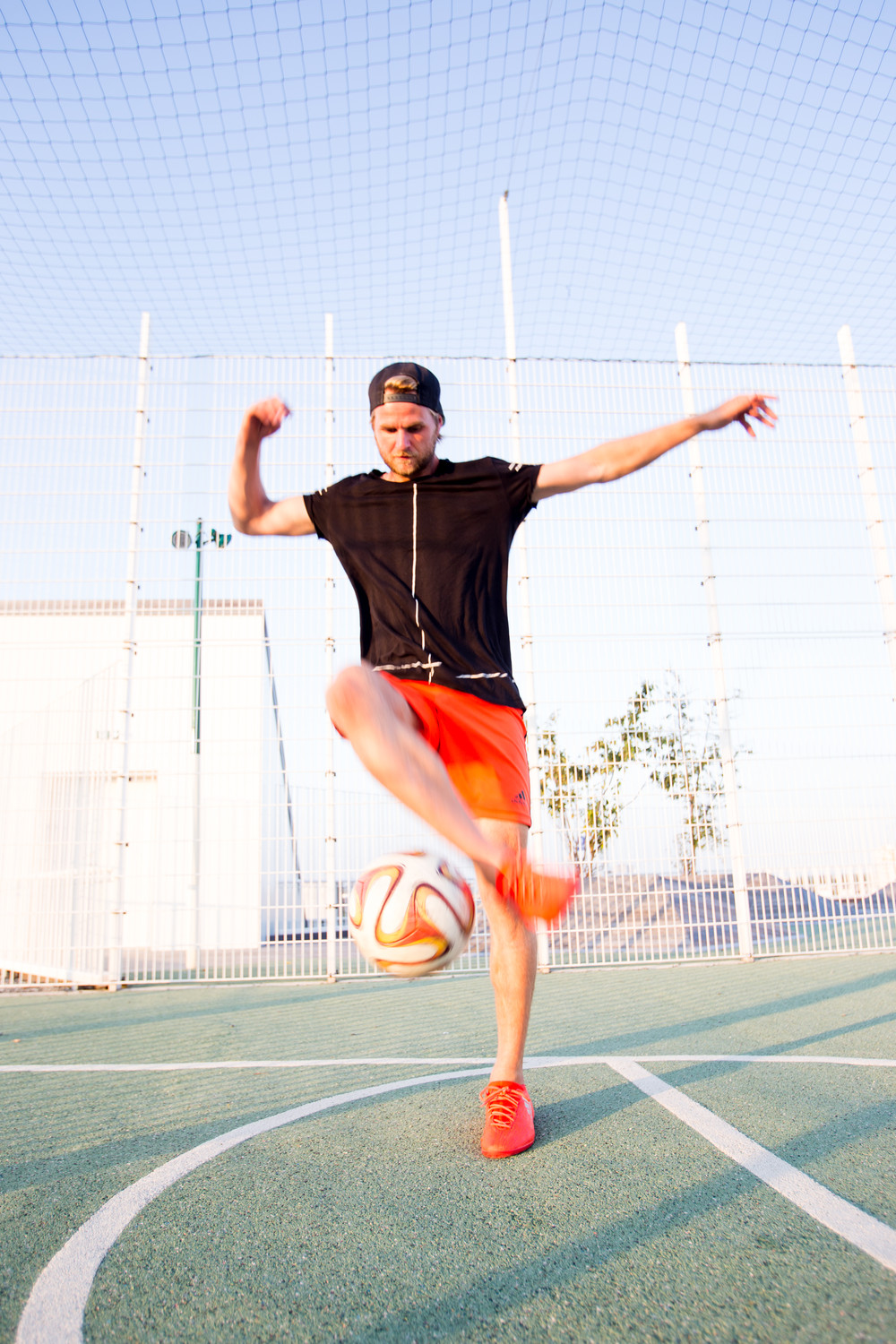 We went on the shoot on a summer evening and got some beautiful evening light that lit up the shots well and made everything look warm and allowed us to capture the atmosphere. 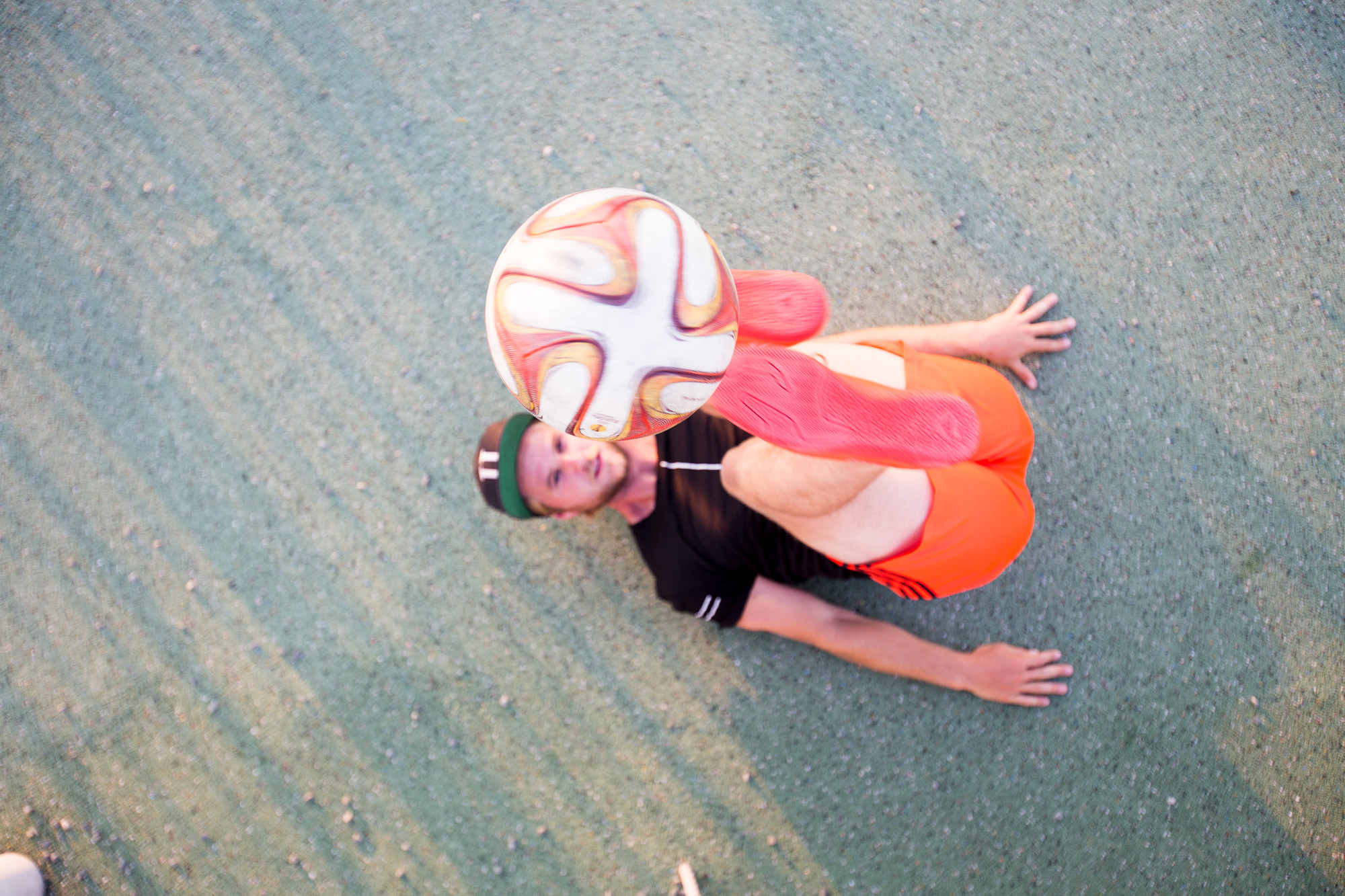 For the shots from above I actually just climbed on one of the children's playgrounds elements, in order to get the high angle, afterwards cropping out what else my wide-angle captured of that. 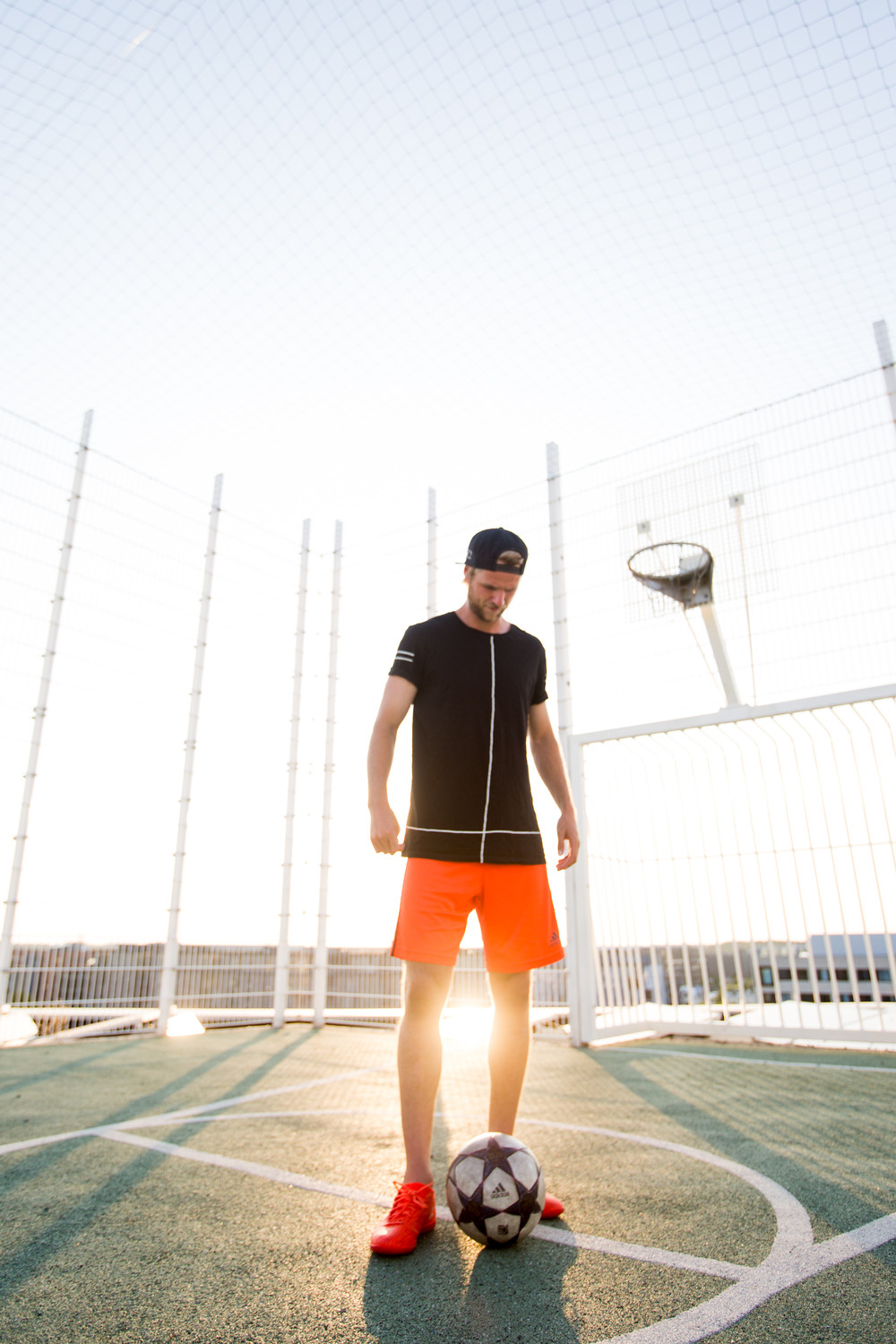 The stupidest thing I did that day was to take about 100 shots of trying to get the ball to cover the sun while Brian was kicking it up. Doing that without welding spectacles or using your display, is a really bad idea and actually I was crying for the rest of the day and had a headache the day after. 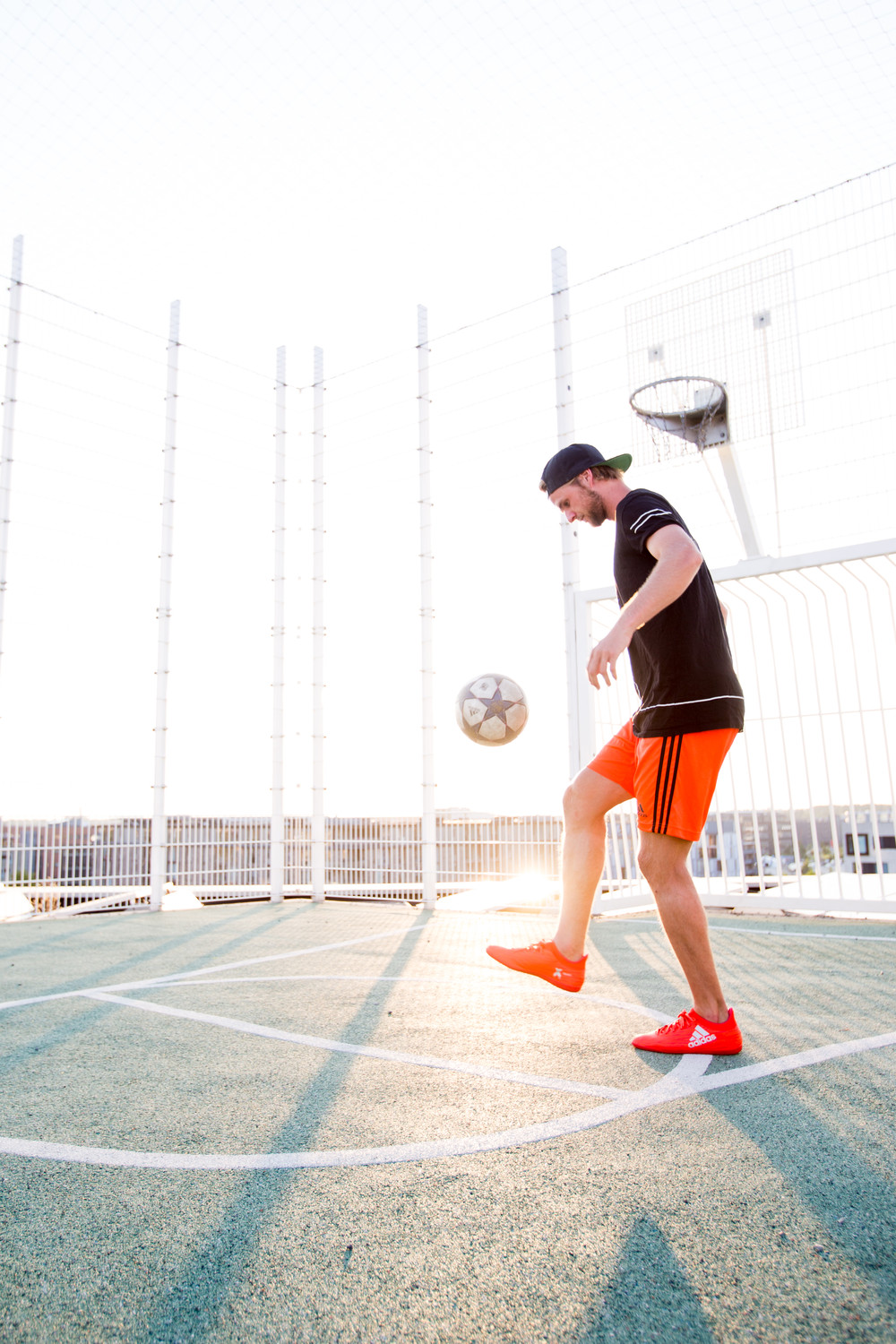 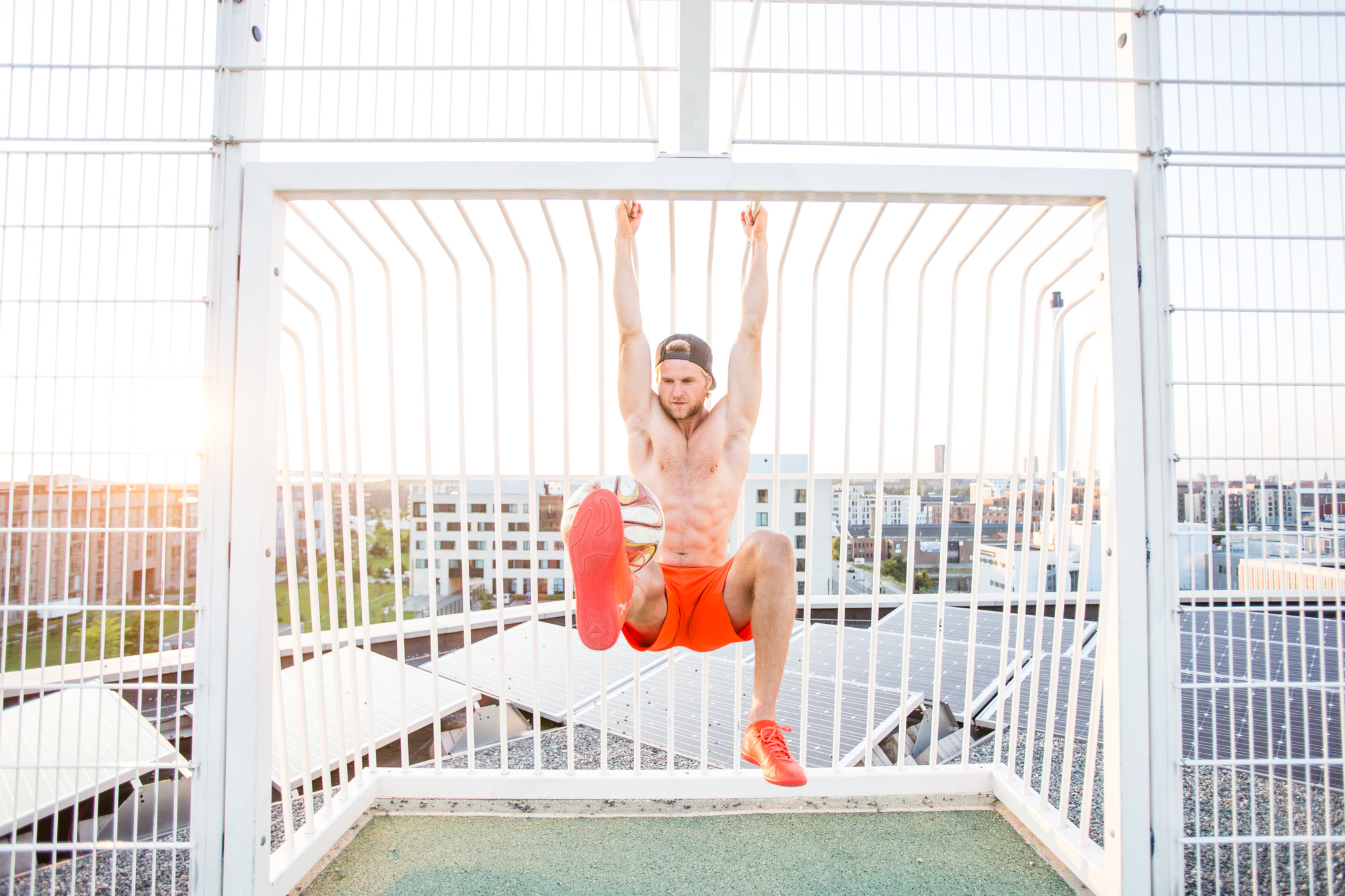 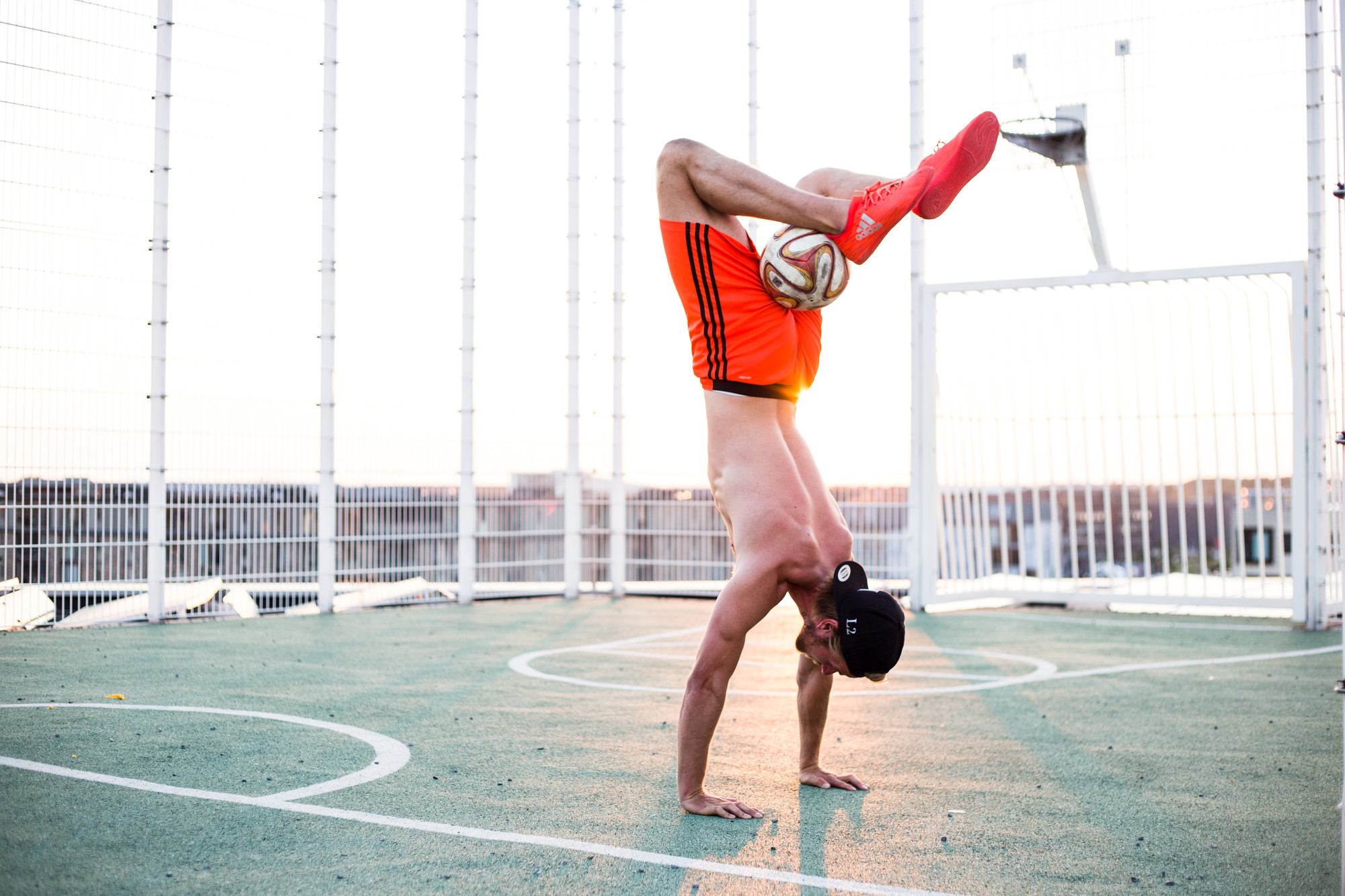 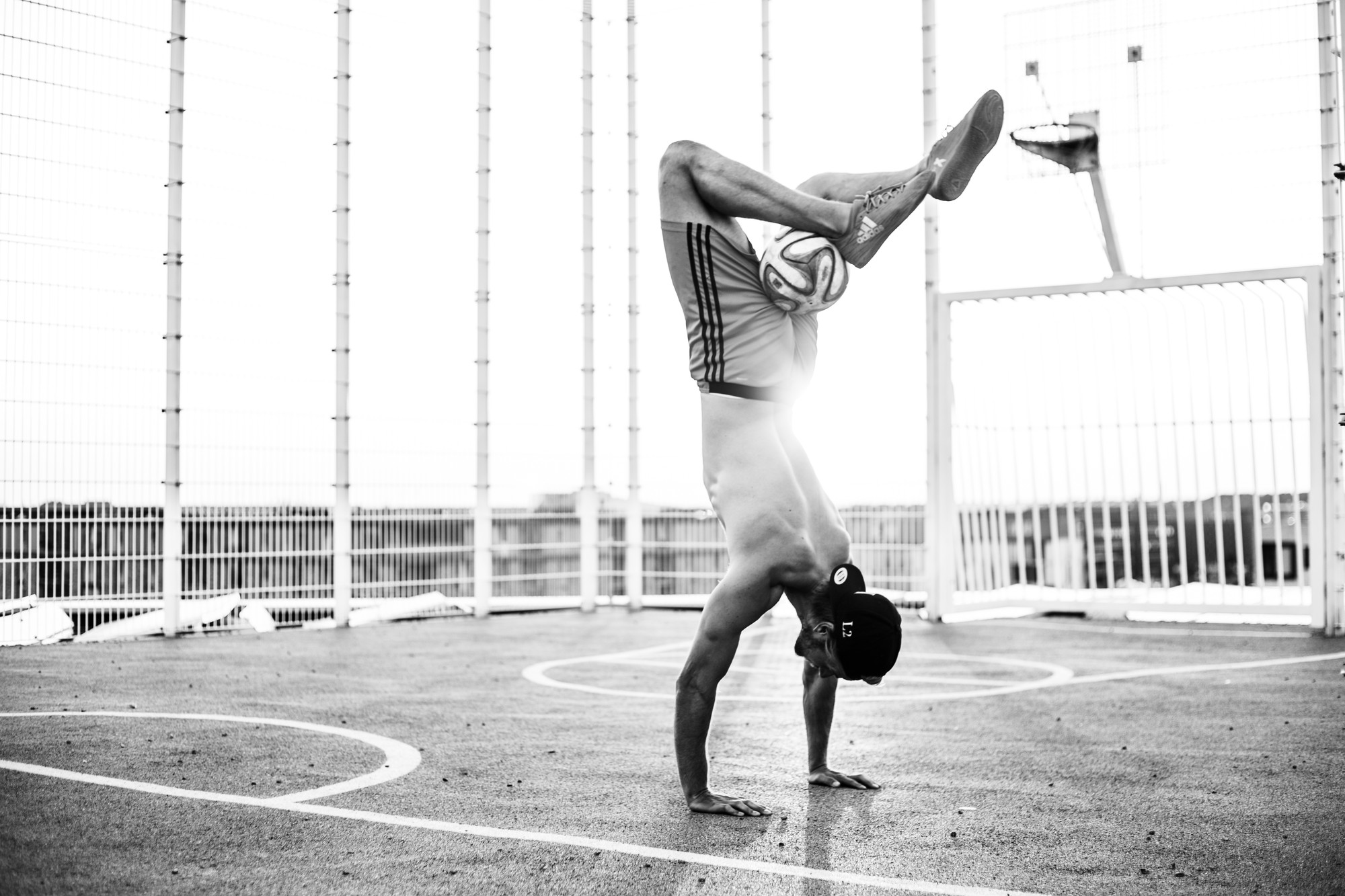 The funniest thing we did together when we wanted the last portraits was to actually have Brian balance on a football to get him on the green background. The wall we shot it in front of, actually changed colour above waist level, so in order to elevate him a little, he just balanced on a football, while still being entirely focused on me shooting him, which is pretty incredible on his end :D 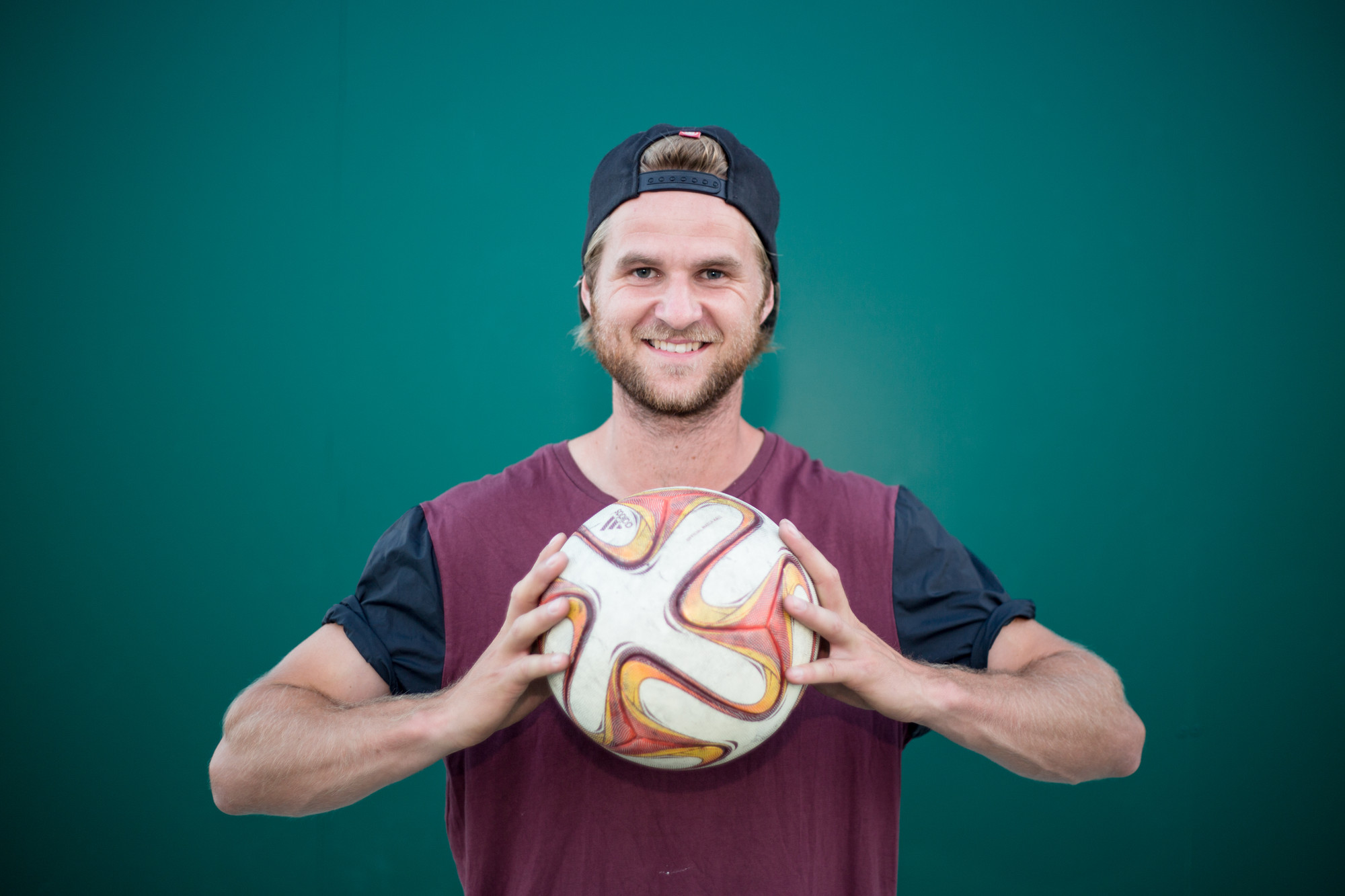 I'm very happy with the shots and that we took a couple kind of by accident or by just saying:

Hey, can you quickly do this

and I think that's what you should always keep in mind if you're capturing what other people do or doing shoots. If you get a silly idea and it doesn't take a lot of time or effort, just try it out, communicate your idea. 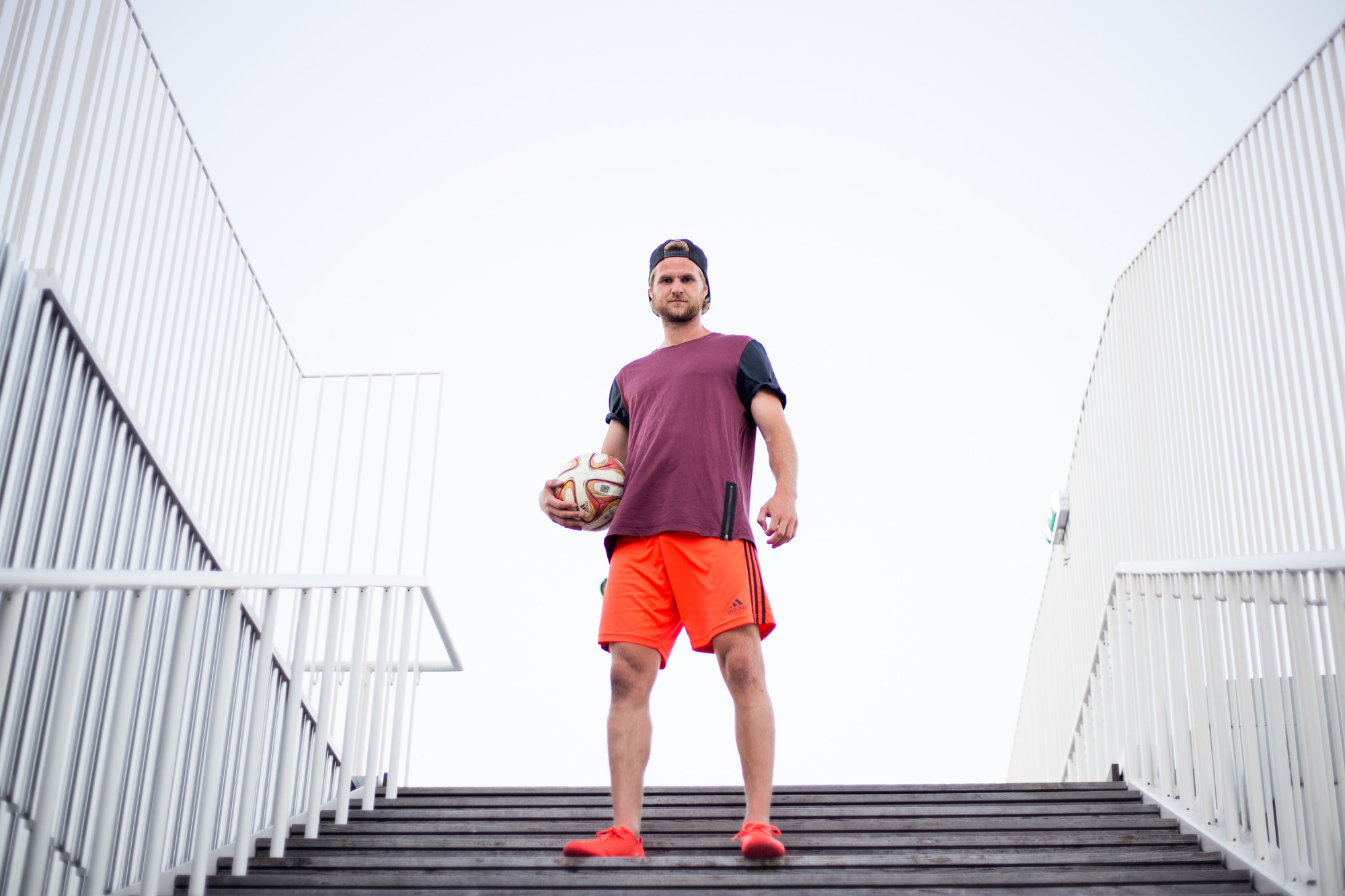 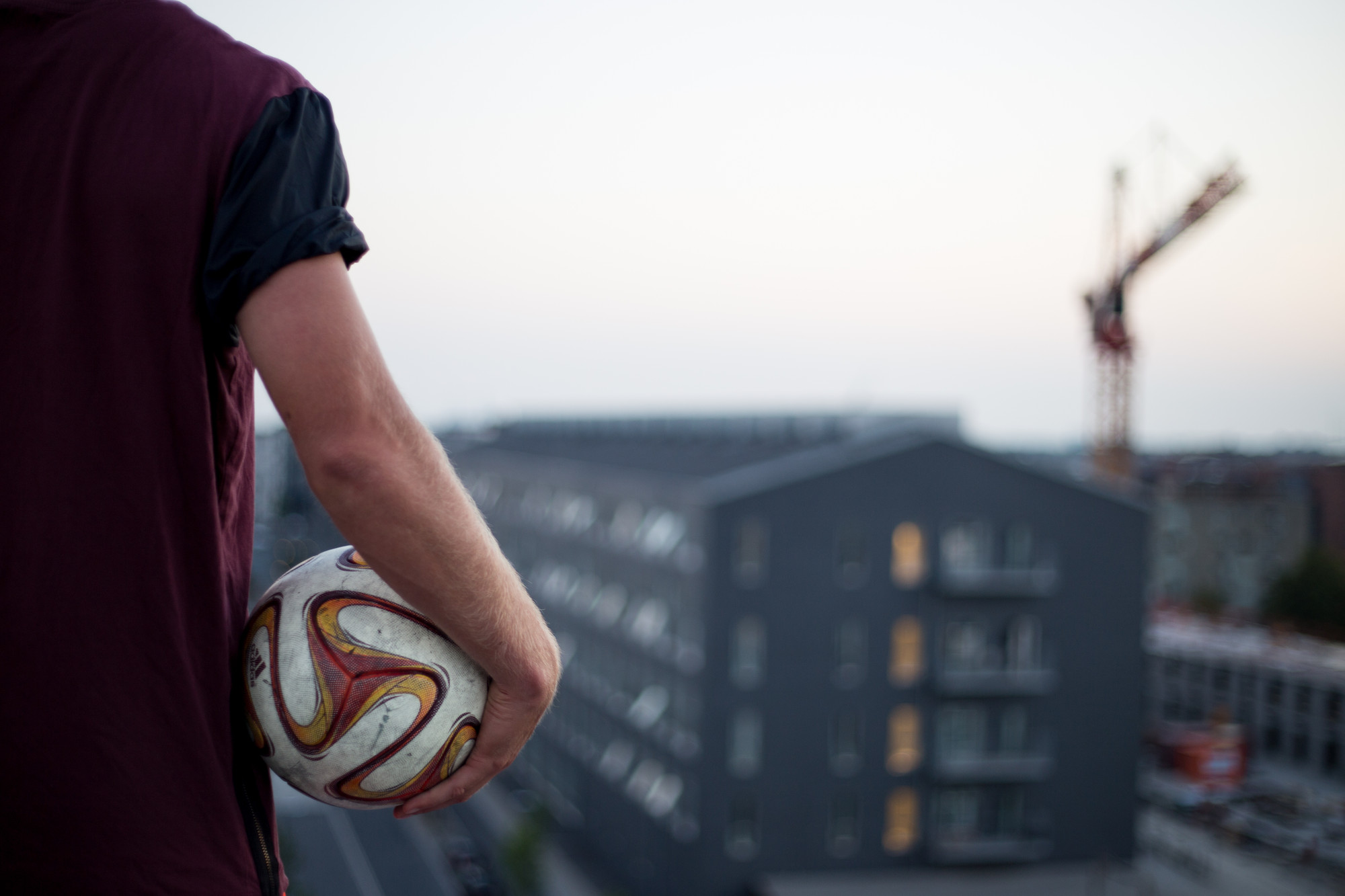