Nude photography to me is interesting, bodies are interesting, hence naked bodies are also interesting. A lot of people might equal nude to vulgar or to cheap, but as with all other aspects of life it's worth documenting and to me, can be quite beautiful.

Don't forget to read what Judith wrote on the matter!

I'm not really a fan of my body and I wasn't a big fan of showering after school PE classes because I always thought I looked weirder (well I was a goofy looking kid), so I remember feeling ashamed. What I learned from this, is that this shame is worth fighting. Without being exposed to photography and wondering if I would like it or not or to draw my own borders what I like and what I don't like to see in images, I probably would never have thought that much about it.

I have taken a couple of self portraits and I still like some of the shots I did. I can only assume that this scenario is true for nude models and photographers around the world right now. If an image is published, it mostly means to me that both parties agreed on, that this is something that they are proud of having created together.

Well, a couple wants to look good in their formal clothing in a beautiful nature setting. For nude photos I guess it's something like the dialogue from American Beauty

Are you just looking to lose weight, or do you want increased strength and flexibility as well?

and the main character answers:

To me there is absolutely no harm in nude photography if it's based on mutual consent both on shoot and on the publication. I don't think people should be ashamed to show their body and when ever I hear somebody around me comment:

Maybe she shouldn't be wearing that outfit

because they think a woman is too fat for what she's wearing I remind them of my attitude towards equality. People should do what they like and prefer, they are not here to please you. On a related note, read Amanda Palmers story about the Daily Mail. I'm a big fan of hers and she's not shy about her body, but just accepting it very naturally, without shaving and without compromising for societies expectations. At some point the undresses and calms the audience with:

On a related note, not only photography, but appearances of naked people in public, especially for breast-feeding women, which may very well be at the most vulnerable time of their lives, should not be ashamed or embarrassed. 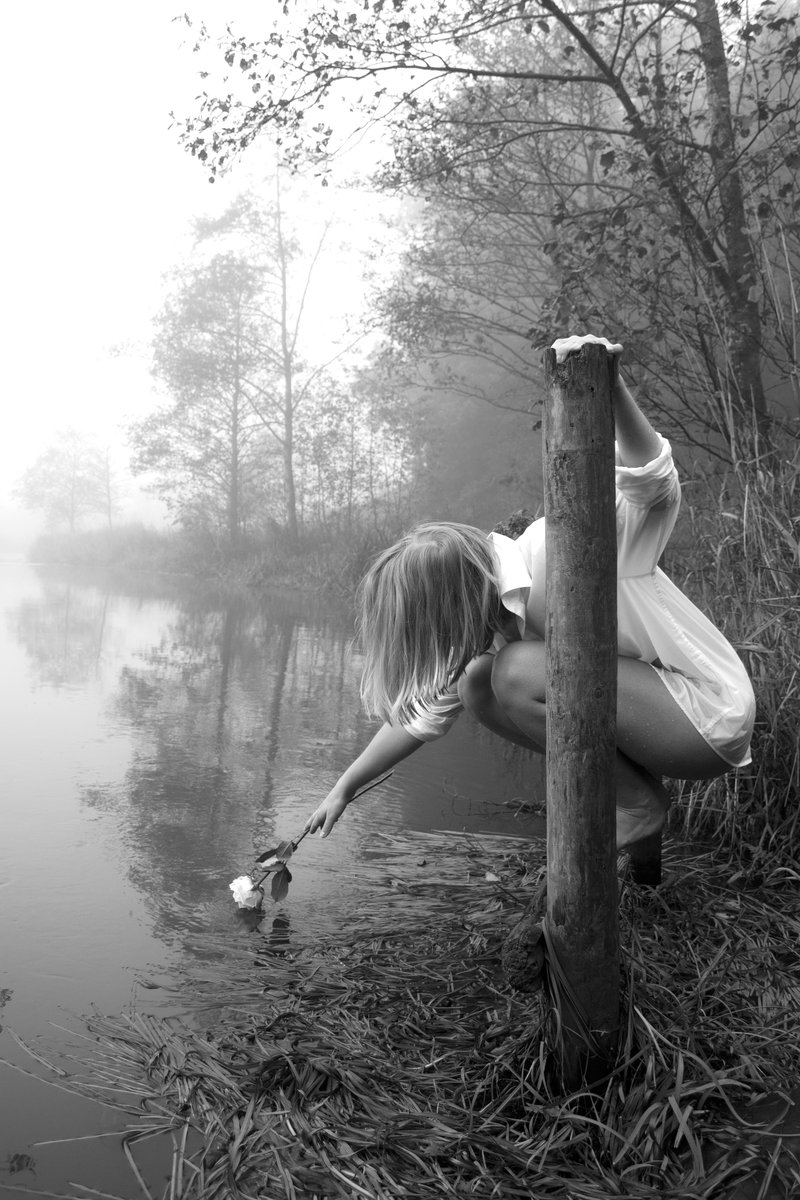 When I was 21 I had my first semi-nude shoot and guess what. There actually was a creepy old dude standing behind the trees on this autumn morning and lurking if my model would take off any more clothes. I meanly stared at him and felt like a body guard all the way back to the car when we left. What an experience.

I had bought my first DSLR half a year before and I had mentioned the idea of a foggy river and a girl in a white shirt and my good friend fortunately said yes to that, which was great! Asking her was making me blush a little and it had gotten autumn before we did the shoot, which actually should have happened in the summer (and it would still have been cold there). Luckily I had grabbed a bath-robe from home which turned out to be very useful.

When I look at the pictures now, I could probably have done much better, but at the time I got some nice responses, also her boyfriend loved them! So again: 1 shoot, 3 happy people. (I'm not going to count you, creepy old dude, that doesn't seem to have a super-adjusted relation to naked bodies!)

Shortly after I joined a small photo/video and event company and my next shoot involved a studio and a model only wearing a snake waist-up. We we're both sent there and we didn't come up with the concept, but the company mastermind had come up with that. When she asked me what she should be wearing, I said:

$boss_name would probably like as nude as possible, but as you prefer

Which prompted her to throw top and bra in a corner (and put on a snake). Everybody on set was very professional and we've shot some underwater stuff with the same model afterwards, so I imagine we didn't scare her off with that, but that she was just comfortable with her body.

We hosted multiple photography events over the next years and I couldn't believe my ears when one of our staff members made remarks about female models bodies like you would expect while rating a product in size and quality. He shortly after was not part of the staff anymore because we discussed the issue and deemed him not fit for being a part of sets and were praying that none of the models had heard and were discouraged by him.

When I say nude photography, I don't really mean pin-up or the boulevard newspaper (page 6, page 9, whatever they call them) images, because I don't think they're good examples. There is a lot better photography than putting somebody in a fully illuminated studio and to have them very explicitly exposed for my aesthetic understanding. This doesn't mean I look down on models and photographers that do this, it's just not my personal favs or what I want to do with my time.

If you want to look at some more darker and authentic examples, check out Hendrik Krönert whose blog taught me a lot about what nude photography can be and even though at times being very explicit, shows bodies totally different than a bra commercial and I much prefer it.

On the other hand I also enjoy kind of sexy shots like this video self-portrait of Katarzyna Napiórkowska.

Where To, From Here?

I've had about a full 24 hours of very fascinating and good talks about nude photography and I guess it's a touchy topic, it's a serious topic. Male nude photography is very under-represented and that's kind of a shame.

I think Facebooks and Instagrams nipple-phobia is absolute bullshit, which is why I'm super happy that these are NOT the only platforms for our photography.

Personally I want to continue to keep being a professional on set, no matter what set and to be somebody that people can trust, to have ulterior motives or make them uncomfortable.