In December, only few days before our trip to Tenerife we suddenly found ourselves in the situation of having bought a drone - the DJI Mavic Mini*.
We flew the drone outside for the very first time on Tenerife and can conclude that this little drone is totally suited for drone beginners like us.

Remember to always check up on your local drone laws! 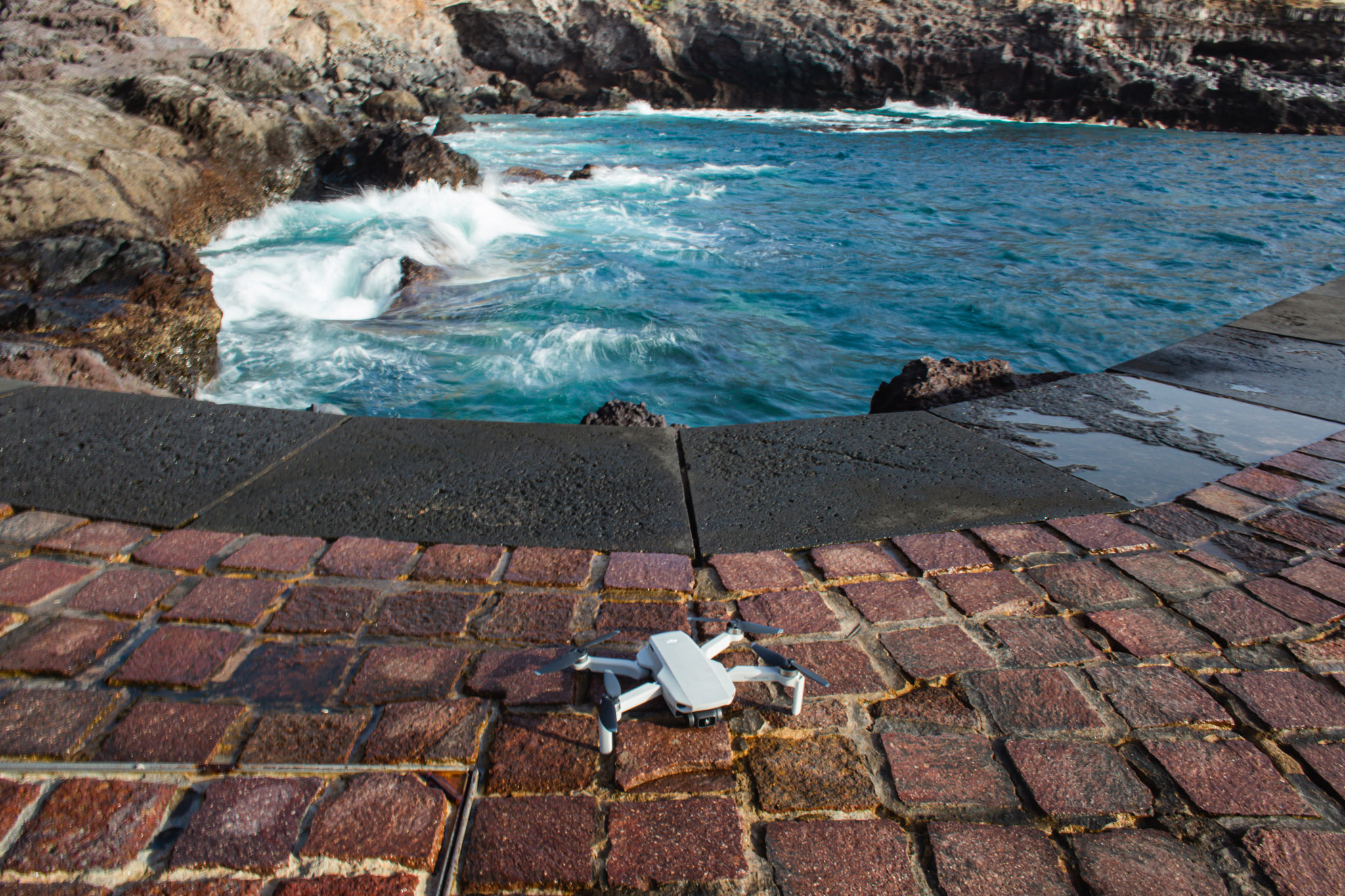 The DJI Mavic Mini is a Perfect Drone for Beginners

There are many reasons why the DJI Mavic Mini is the perfect drone for people that have never flewn a drone before: 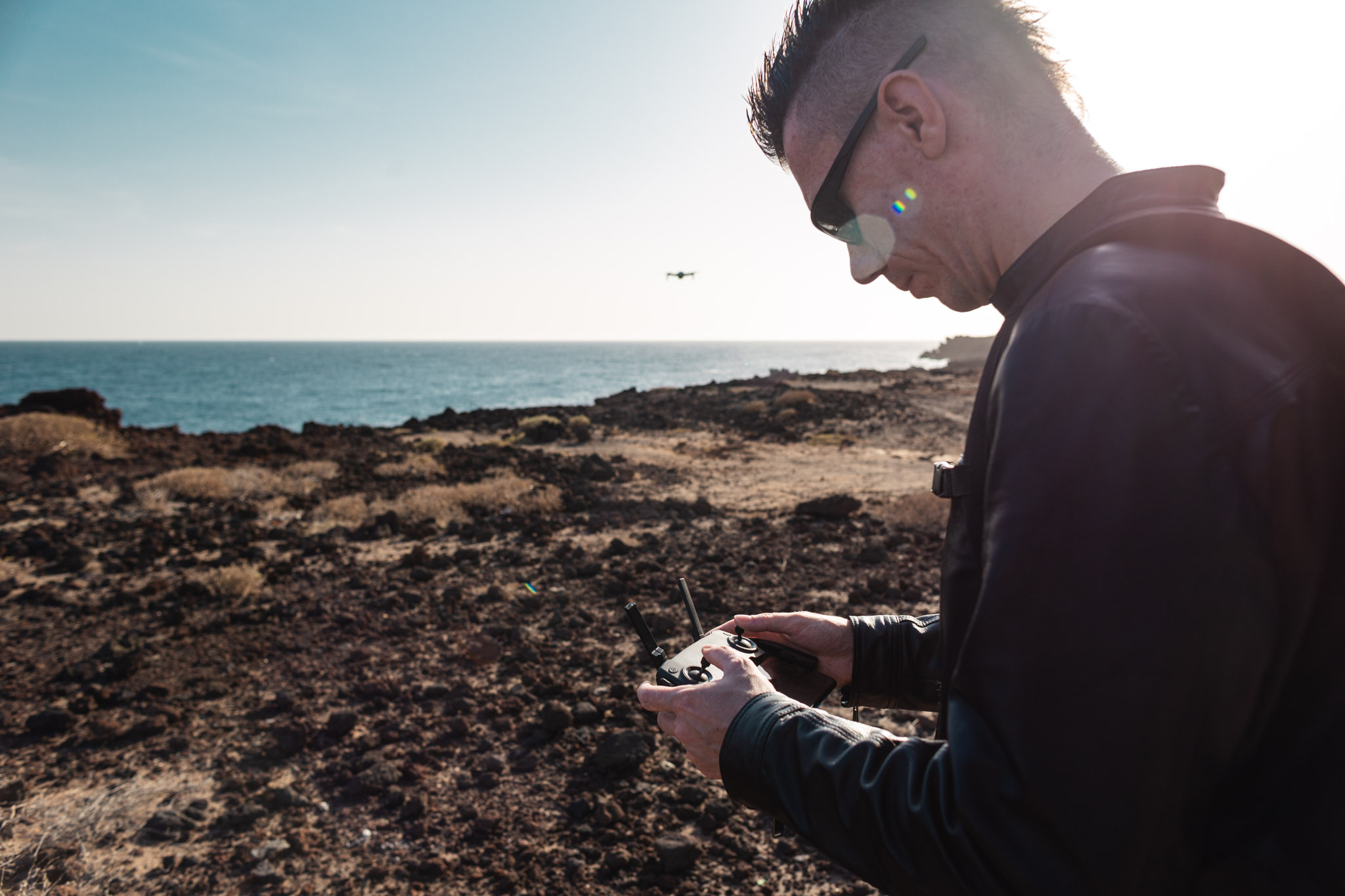 The Specs of the DJI Mavic Mini 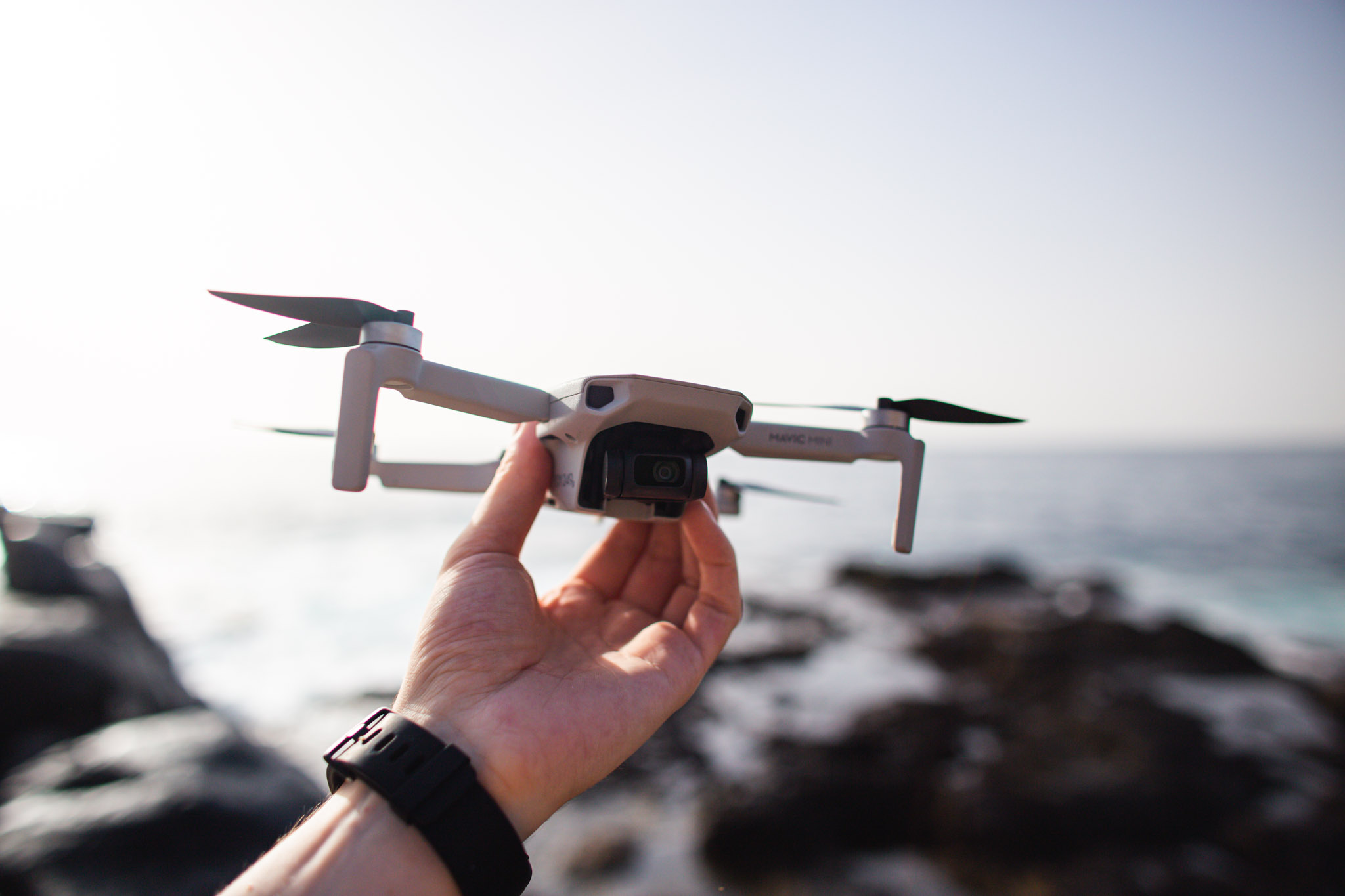 How is it to fly the DJI Marvic Mini

In prinicple, it's really easy to fly the drone!

What does that mean - in principle?

To fly the drone is easy. To simultaneously use the different joysticks and wheels to get footage with smooths motions, pans and tilts will need some practice.

If you have experience holding a console controller in your hand and pressing different joysticks and buttons at the same time, it might be easy for you in the beginning. If you're not used to manage two joysticks, one for elevation and rotation and the other for strafing left, right, forward and back at the same time, just put in some hours. 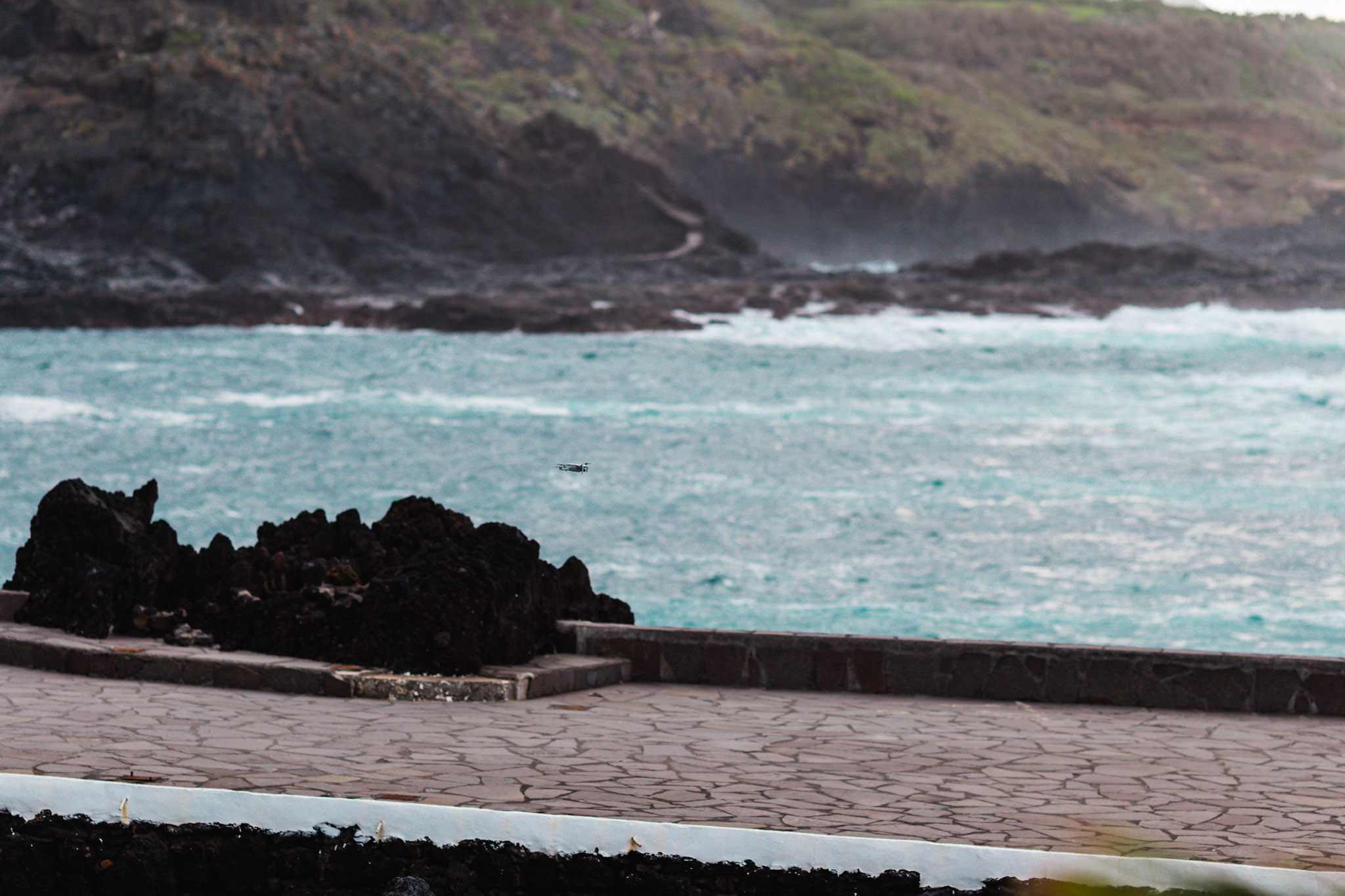 The drone reacts easily, quickly and without delay. According to specifications, the drone can keep the connection to the controller for up to 2km (depending on terrain). We've flown the drone out quite a bit and after some distance we noticed some lagging in the video preview after which we quickly reduced the distance. However, this does not impact the recording of footage and it was still reacting fine. We have not yet tested, whether and how the drone returns to its original location when the connection has been lost or 2km exceeded. 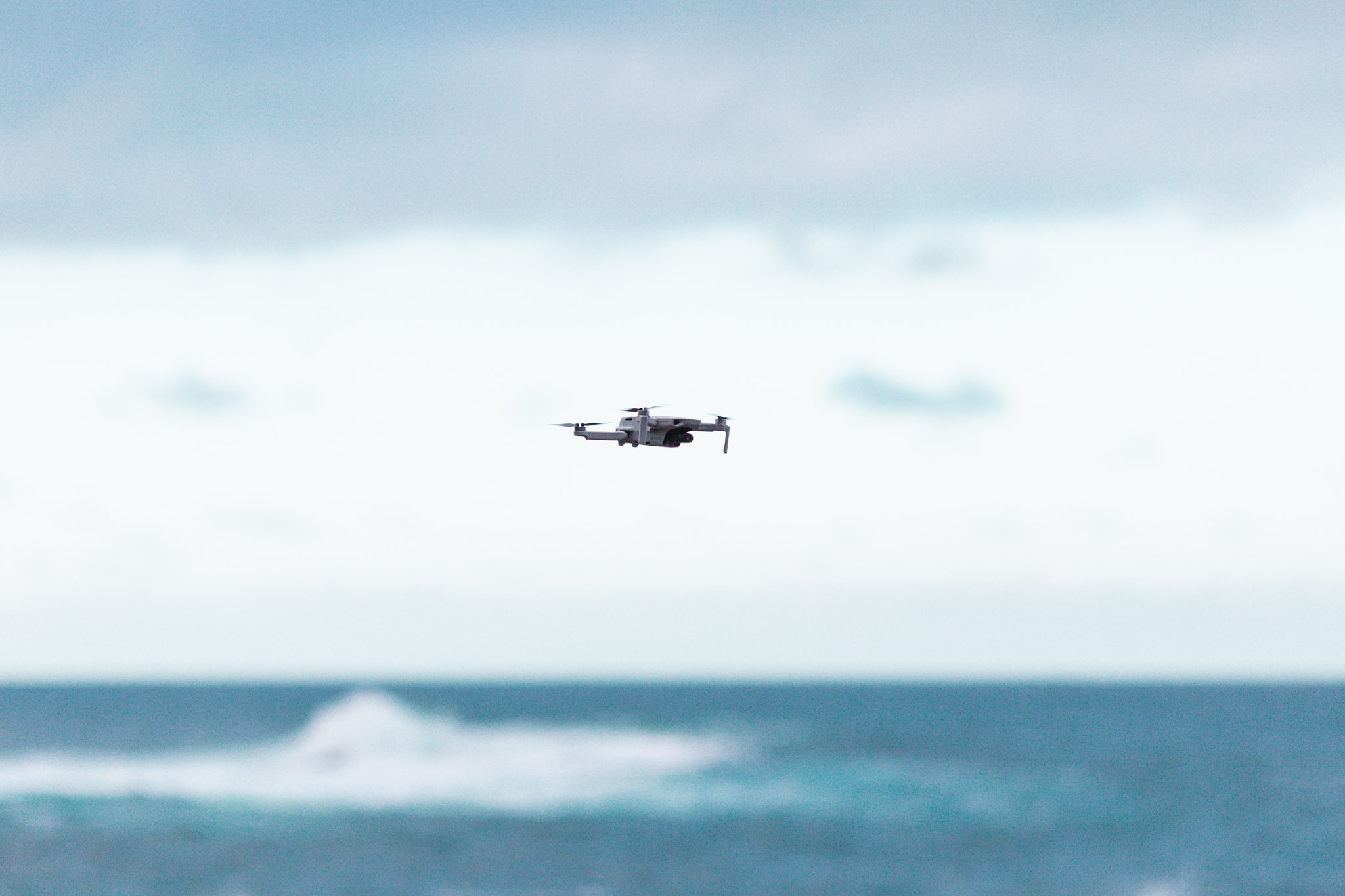 The stabilization works surprisingly well compared to the weight of the drone! The movements are smooth and it can withstand wind to a certain degree (even though its buzzing gets very loud and irregular). We've been flying it over the ocean a lot and when the drone was putting up a fight it mainly only drifted - apart from that the footage still looked stable and no shaking was detectable in the footage.

Of course, the Mini isn't capable to put up with the same wind speeds like other bigger and stronger drones, but that absolutely doesn't mean that it's delicate.

The very first time we flew the drone outside. It was pretty windy.

Which leads to the next point: the drone does not have obstacle detection and it might very well break if you fly it into something! (Then it's very delicate.) The DJI Mavic Mini only has two sensors on the bottom for positioning without GPS. 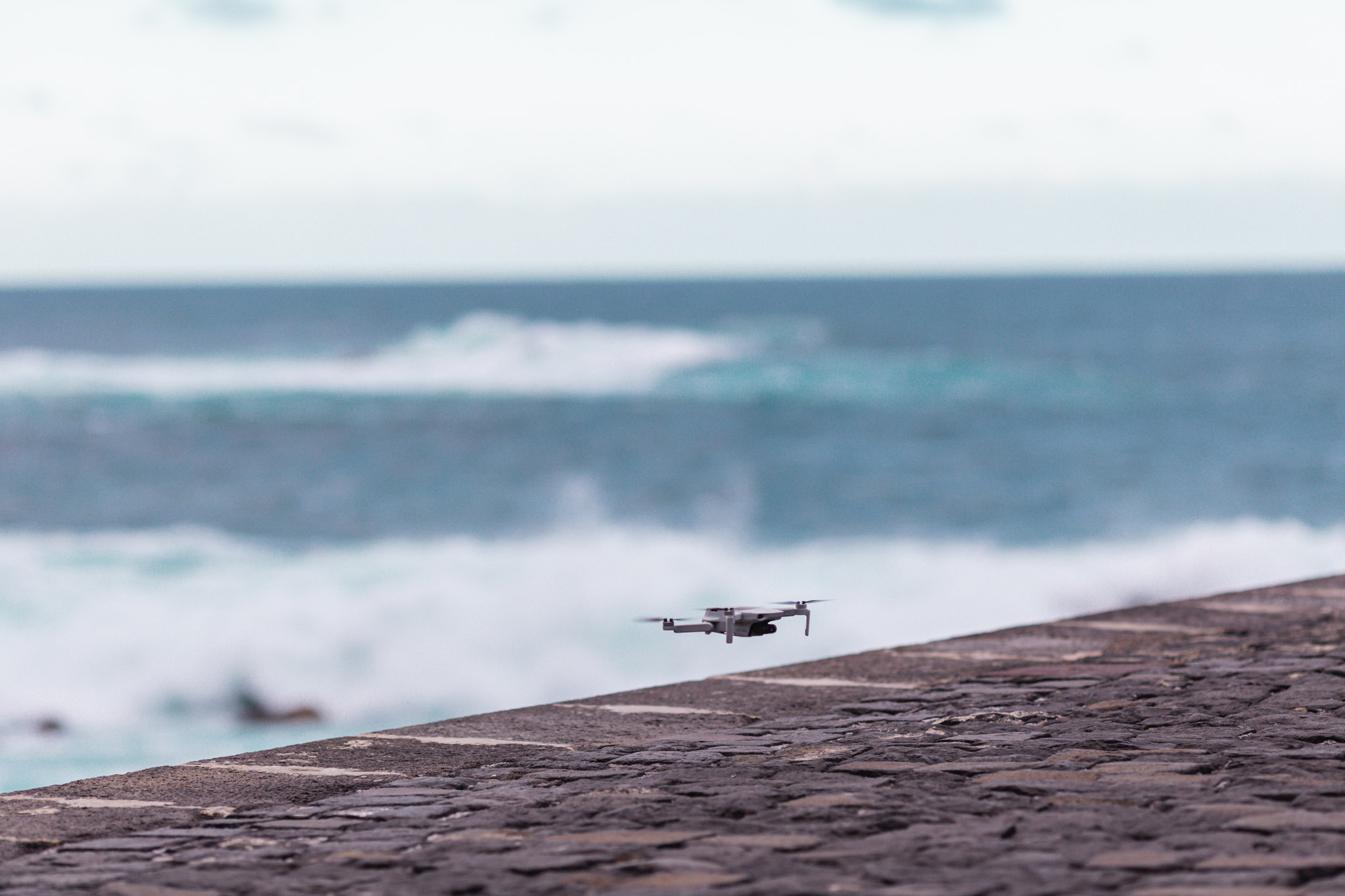 We fly the drone with rather big smartphones, the OnePlus 7T. It works, but it's a bit of a struggle to get such a huge phone attached to the controller. 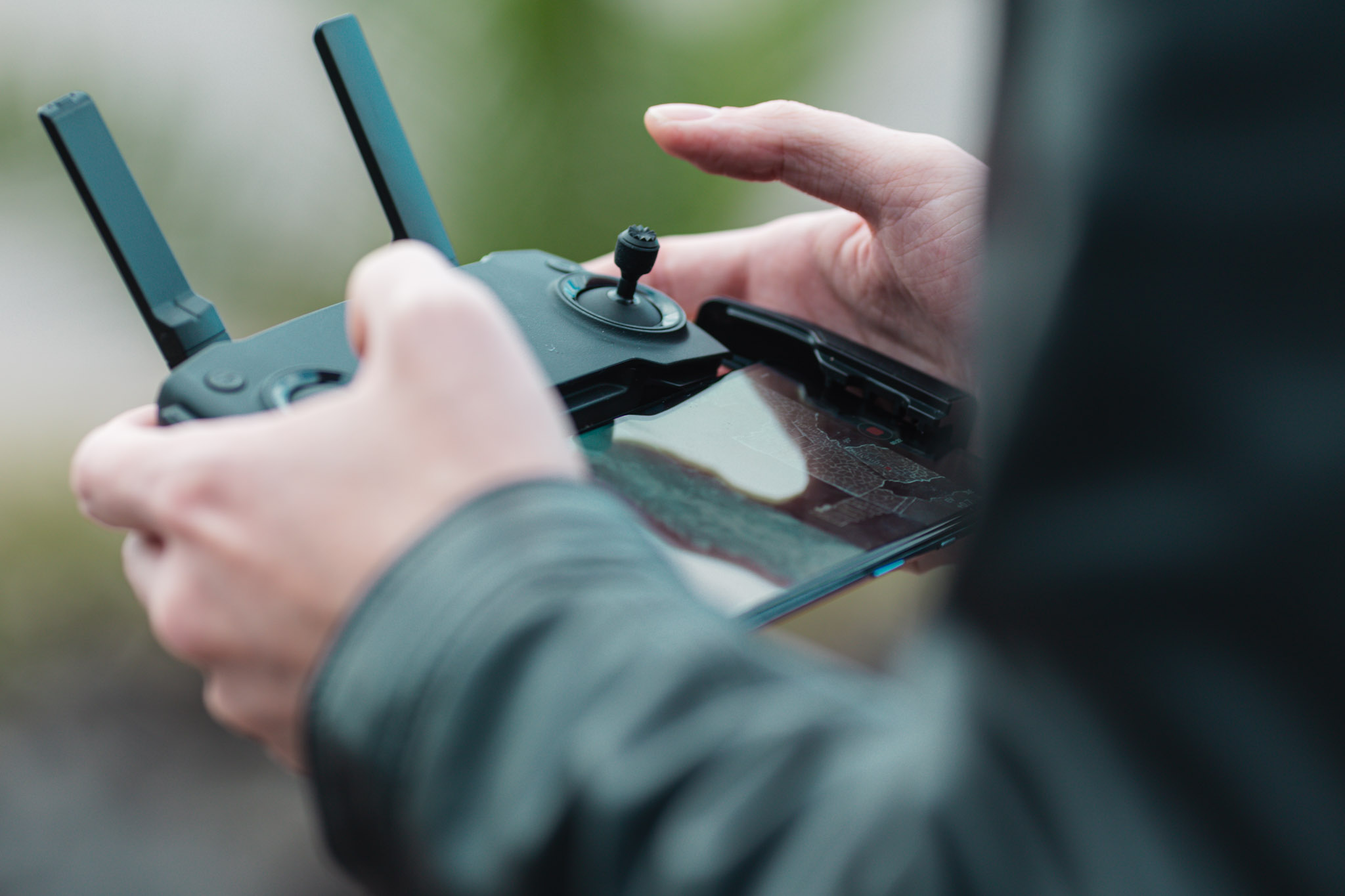 Photo and Video Quality of the DJI Marvic Mini

The camera of the DJI Mavic Mini has 12MP for photos and produces 2.7K Quad HD videos.

The drone camera offers good sharpness and detail, however the dynamic range is not comparable with our DSLR cameras. 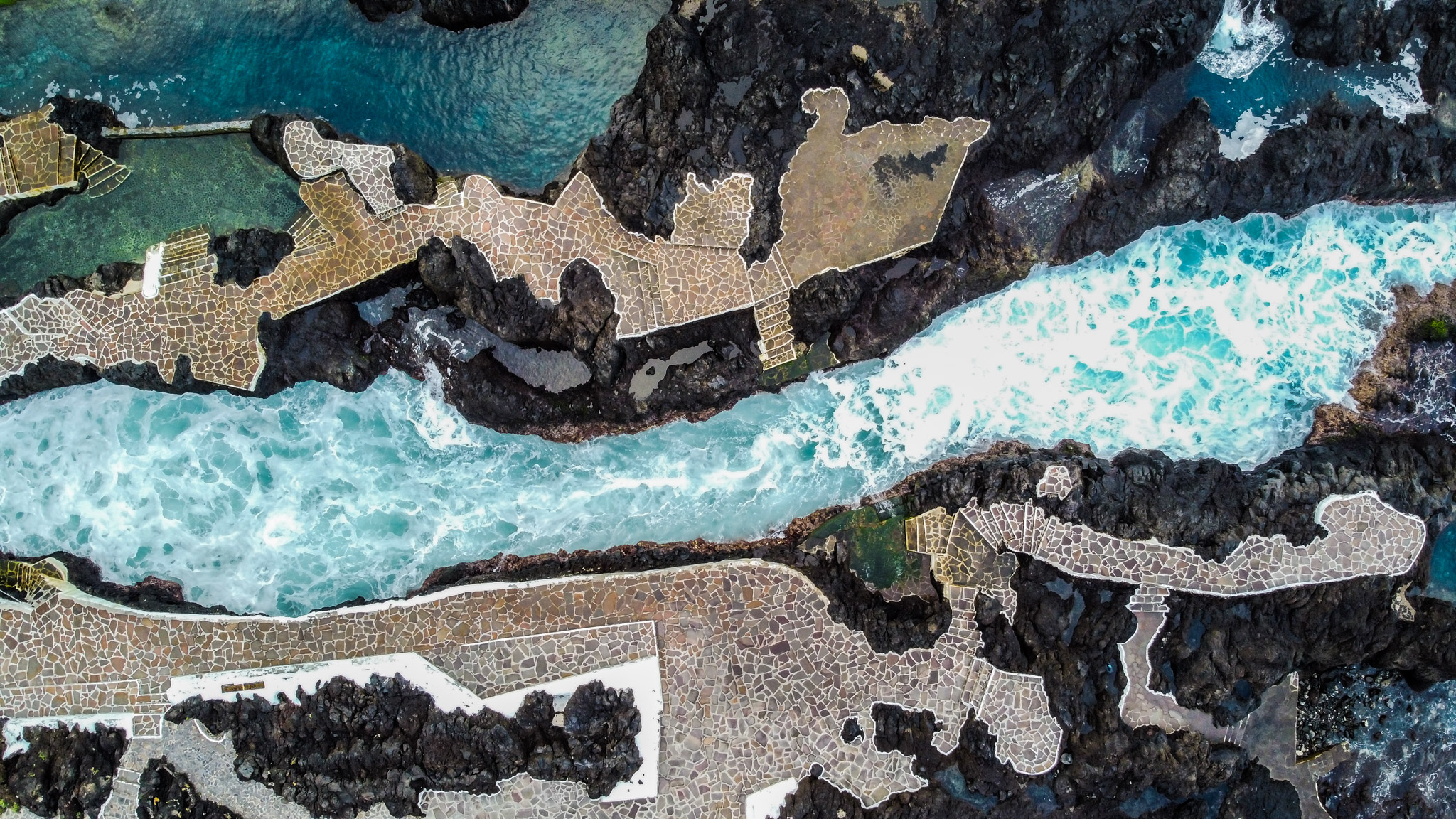 When we filmed waves crashing over lava rock the camera clearly struggled with covering the tonal range of white breakers and dark vulcanic rock. 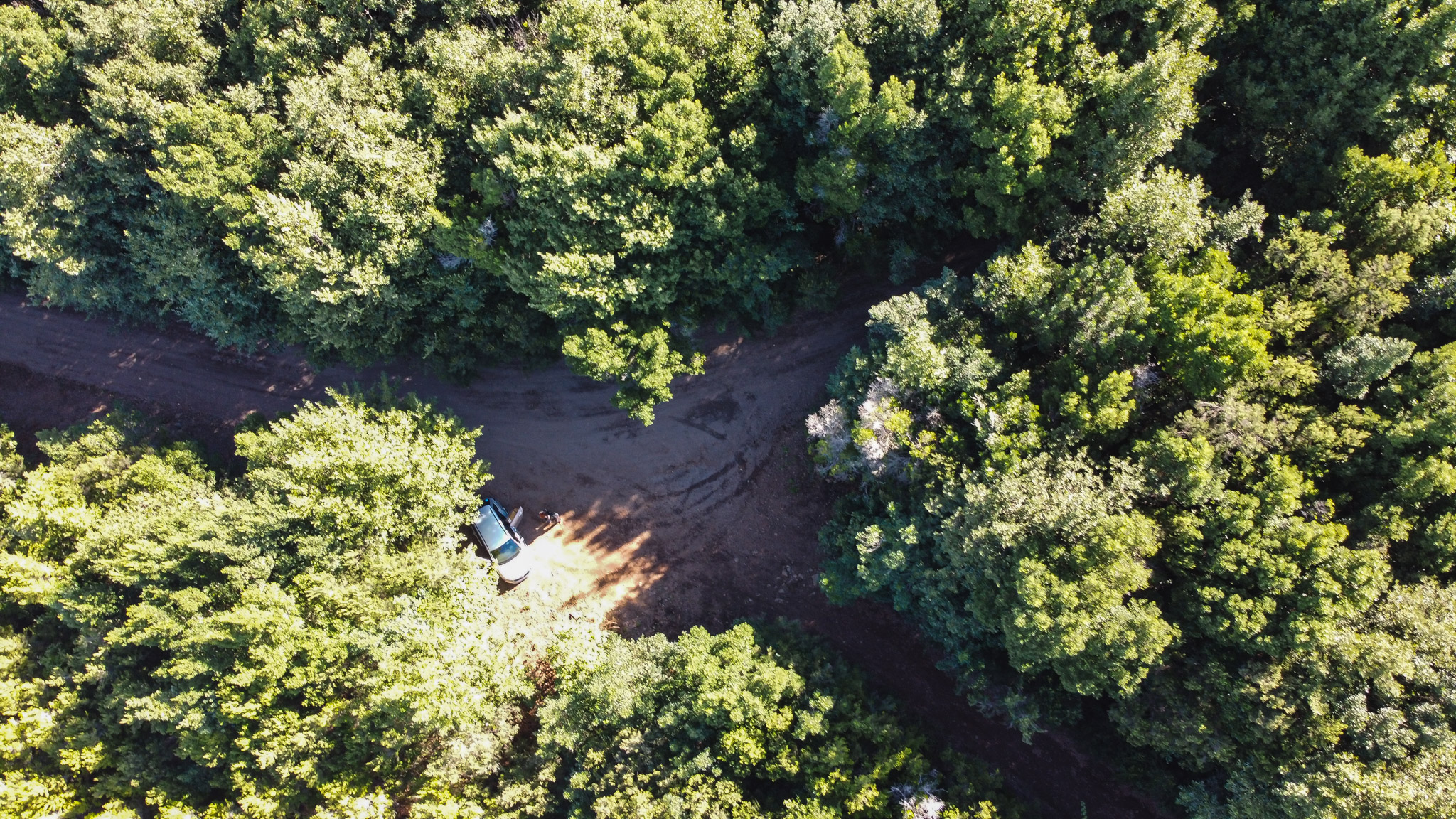 It is possible to change the settings of the camera through the app if needed, and you can shoot "in manual" for photo mode. However, it's similar to changing settings in your regular camera app so not something you can do fluently while controlling a complicated flight sequence at the same time. 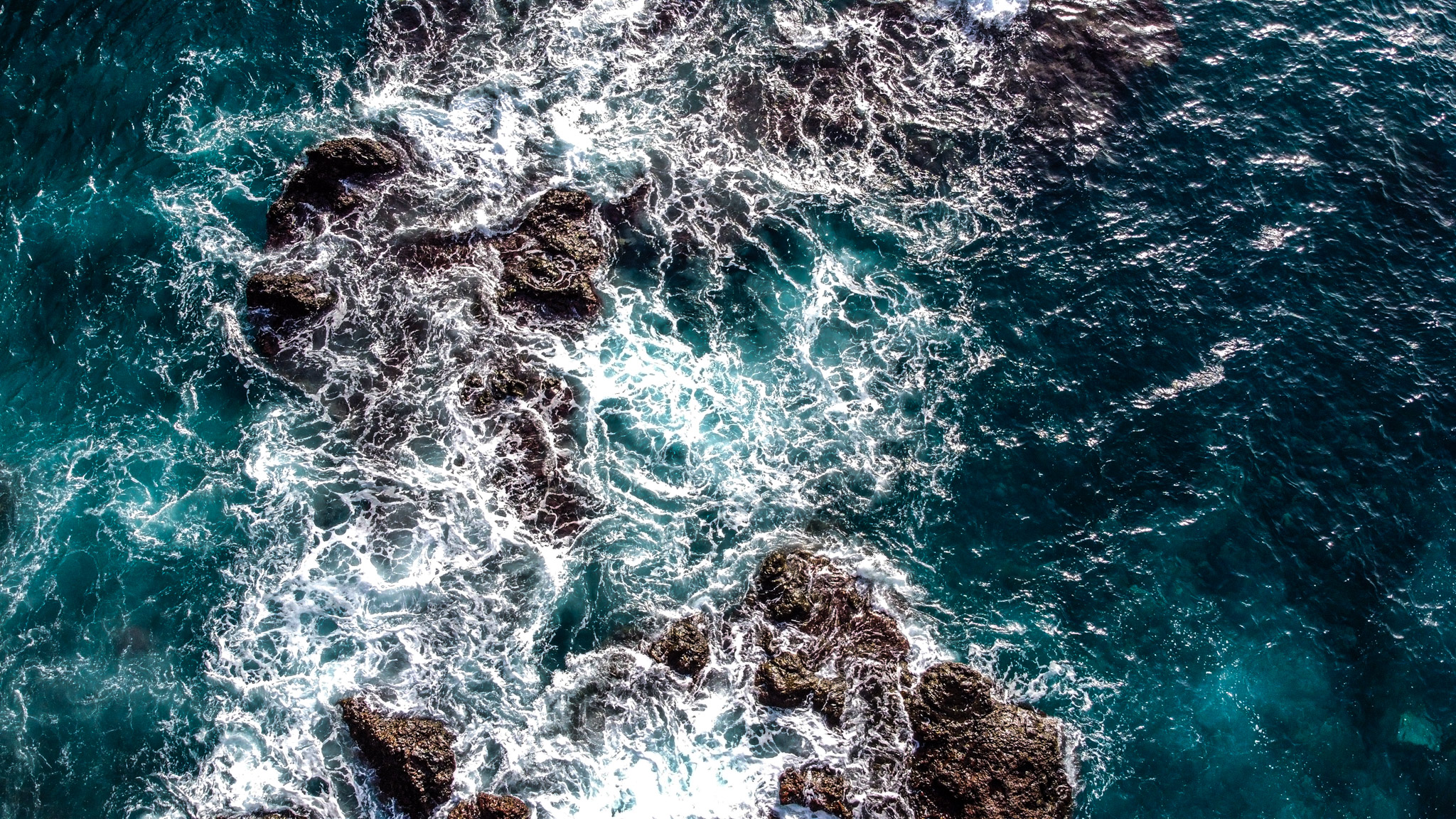 We're very happy with the photo and video quality of the DJI Marvic Mini, because even though it's not what you would expect to see on a cinema screen, it provides different angles to photo and video productions. 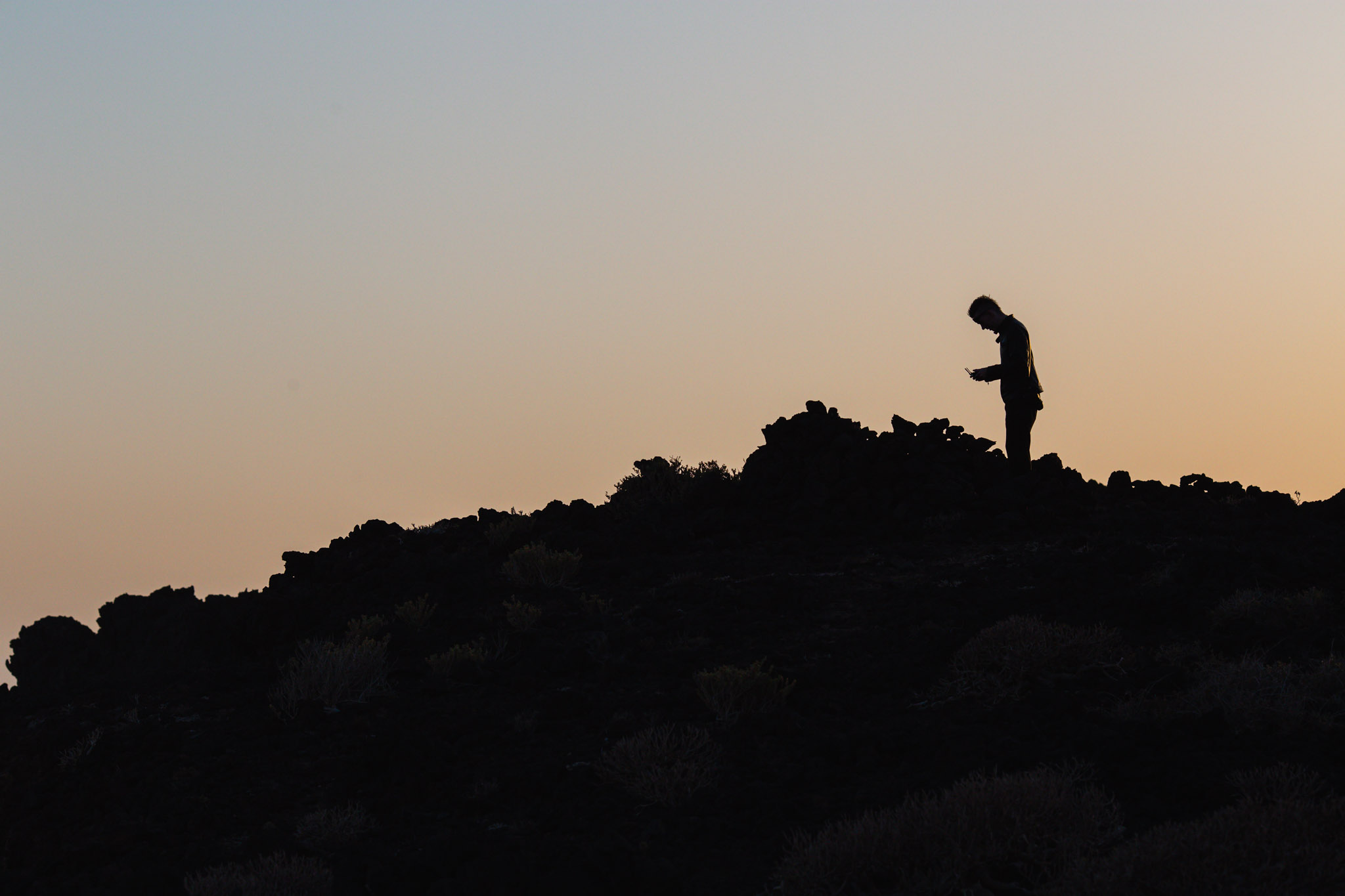 The DJI Mavic Mini does not have as many advanced features as many other drones for higher prices. It can't auto follow and also does not have sensors to avoid collisions. You can't record and save custom flight paths either, the drone comes with four default flight paths.

The drones comes with the following four flight paths:

The flight paths are called QuickShots in DJI lingo which can make them a little hard to find when quickly looking through the app.

The QuickShots work very well. After defining the QucikShot you want to use and with what distance, you have to drag a rectangle on the screen around the object that the app is supposed to use for tracking.

In our case, the tracking worked surprisingly well. This might depend on the contrast of the trackable object and the background, though.

If you decide to get the drone, let us know in the comments, on twitter or instagram what you think of it!