We had to pleasure to shoot our first winter wedding in the last week of January, when Anne Sofie and Henrik tied their knots in Copenhagen. 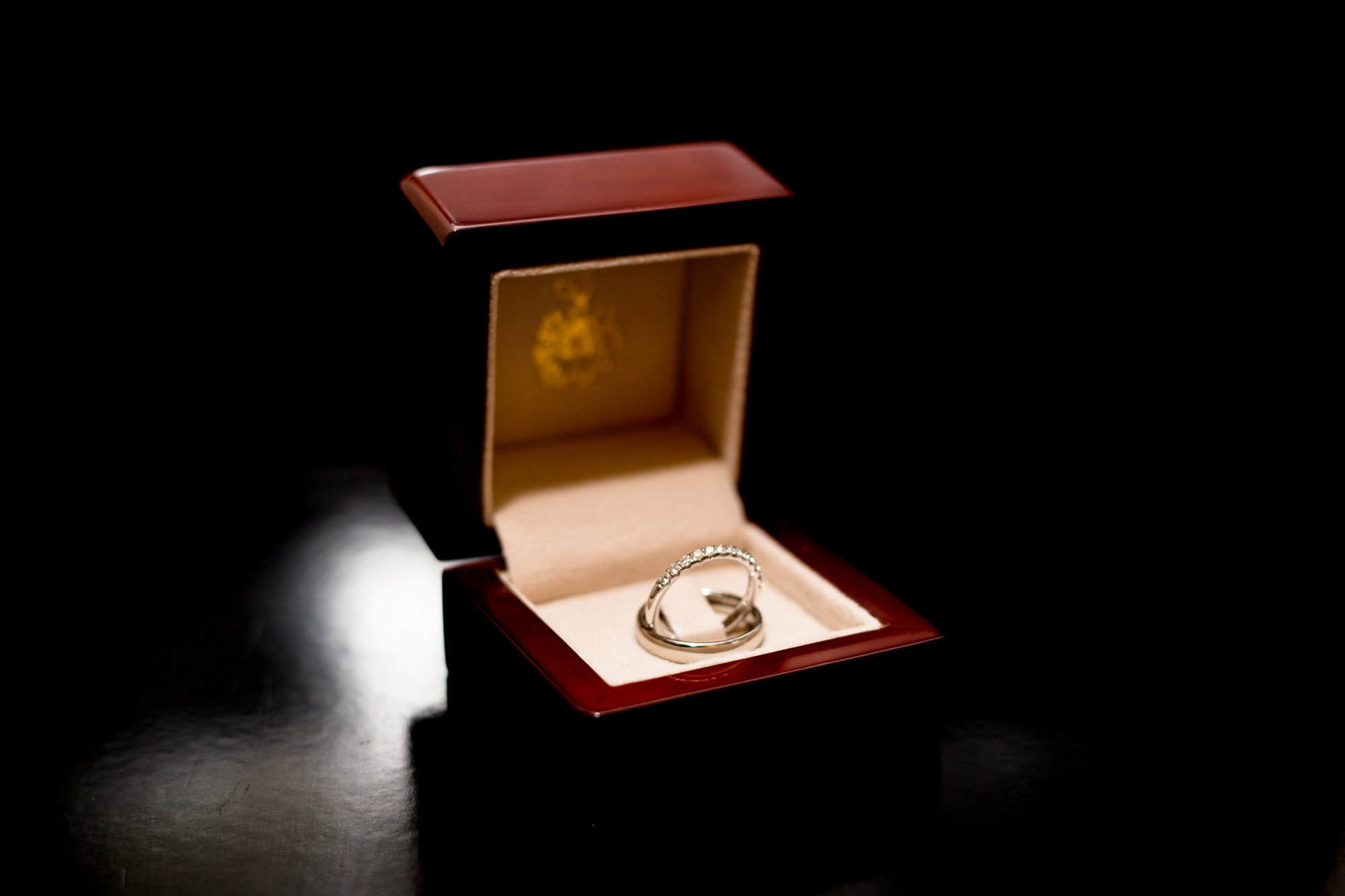 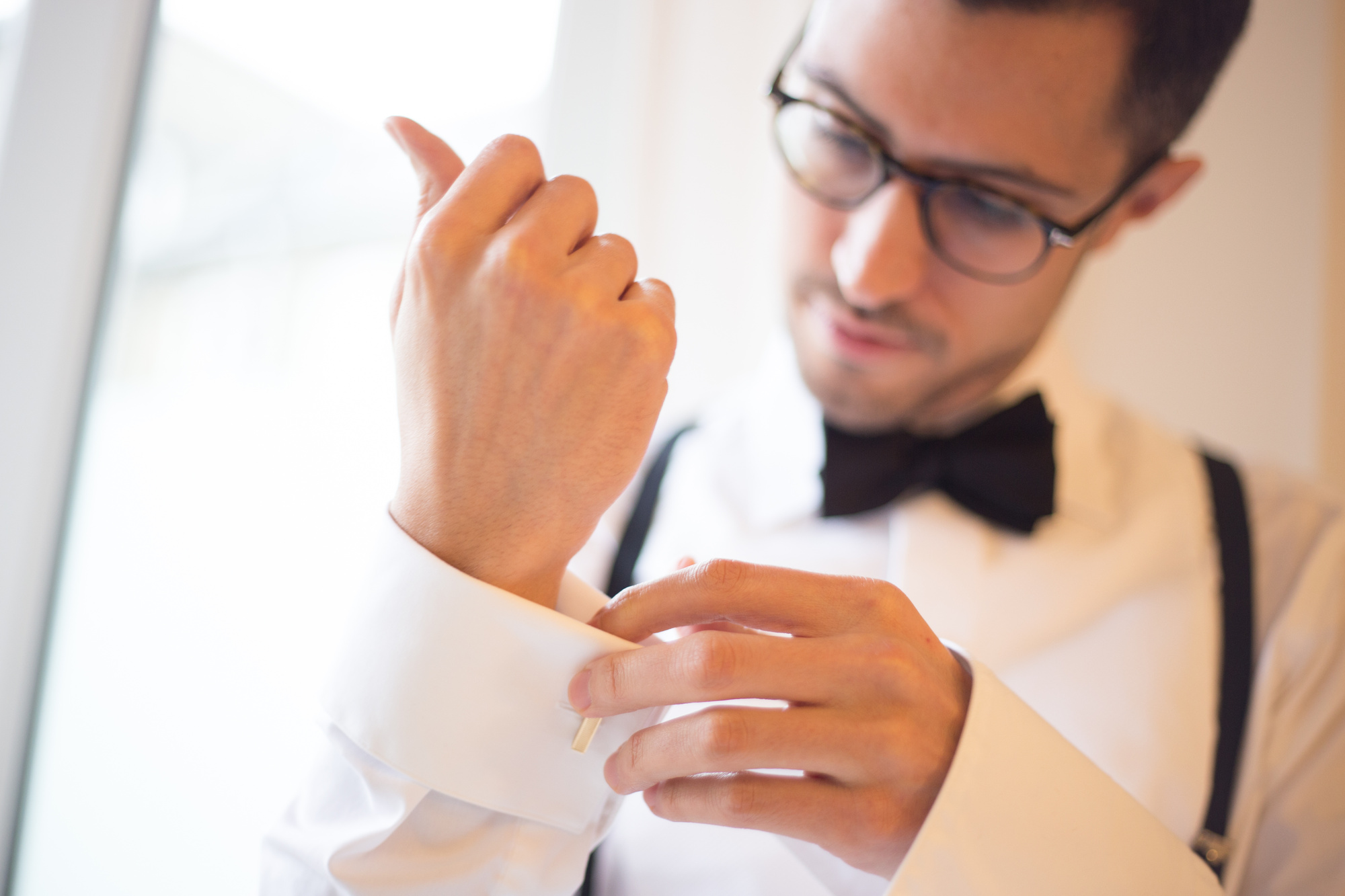 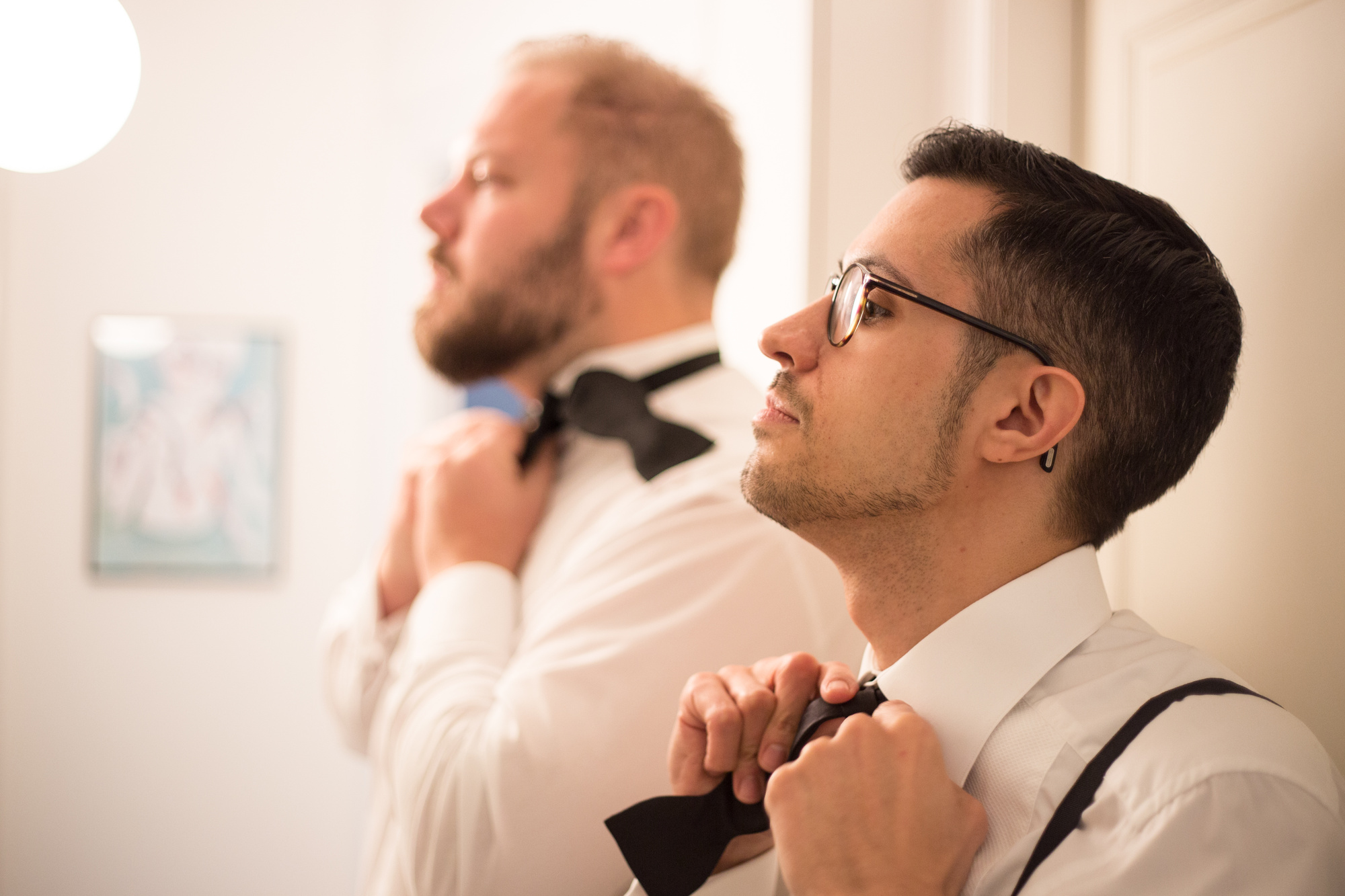 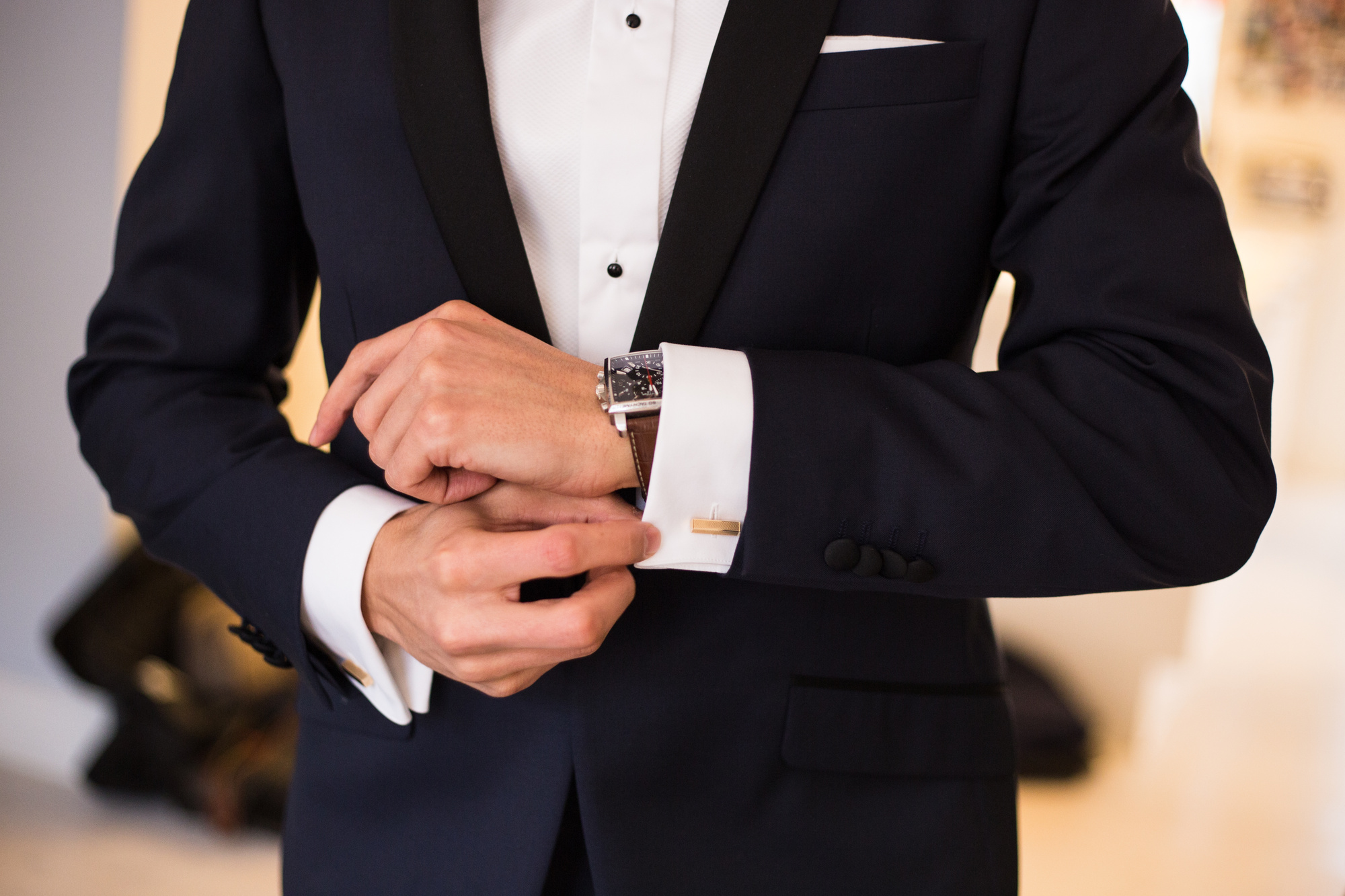 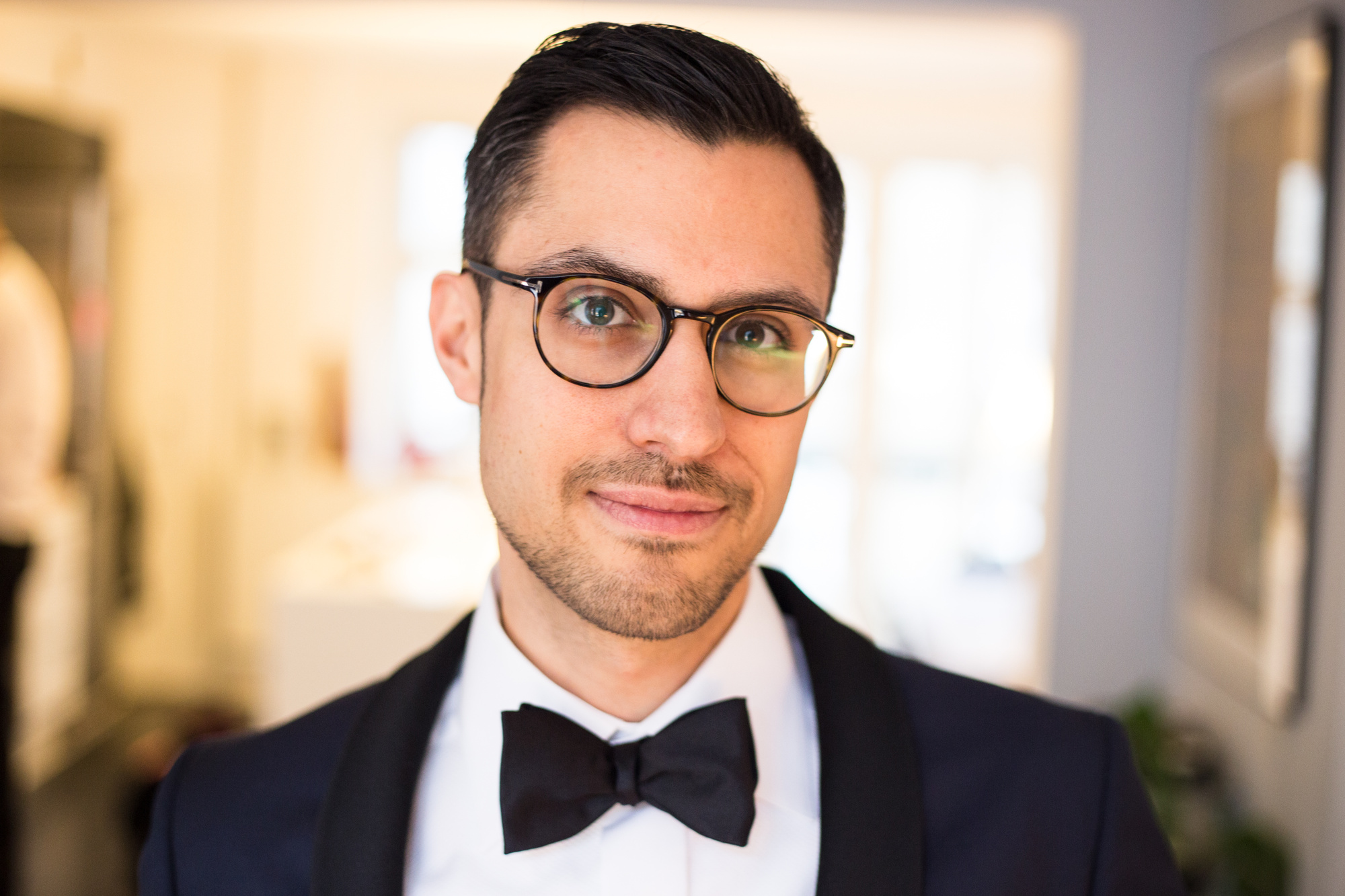 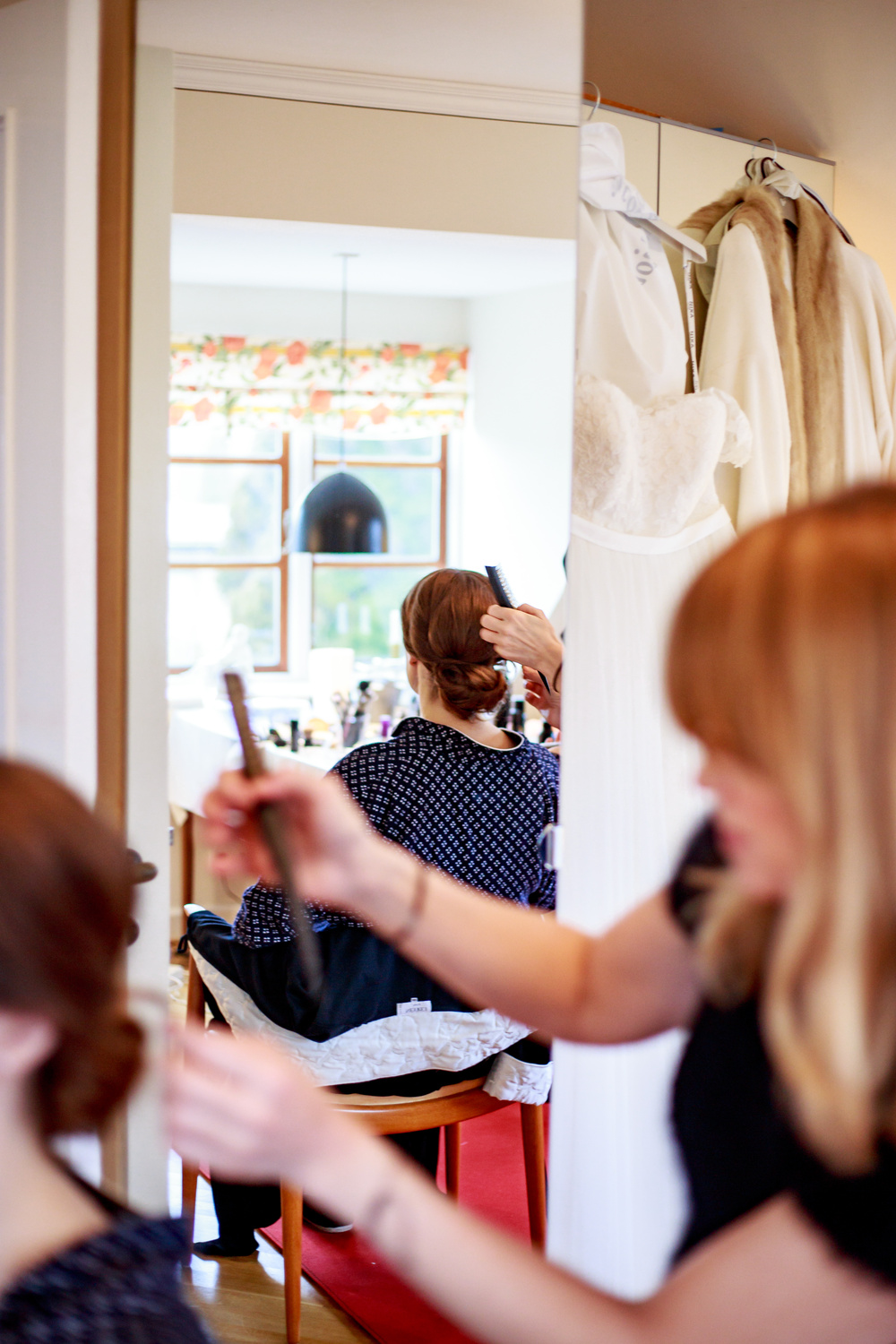 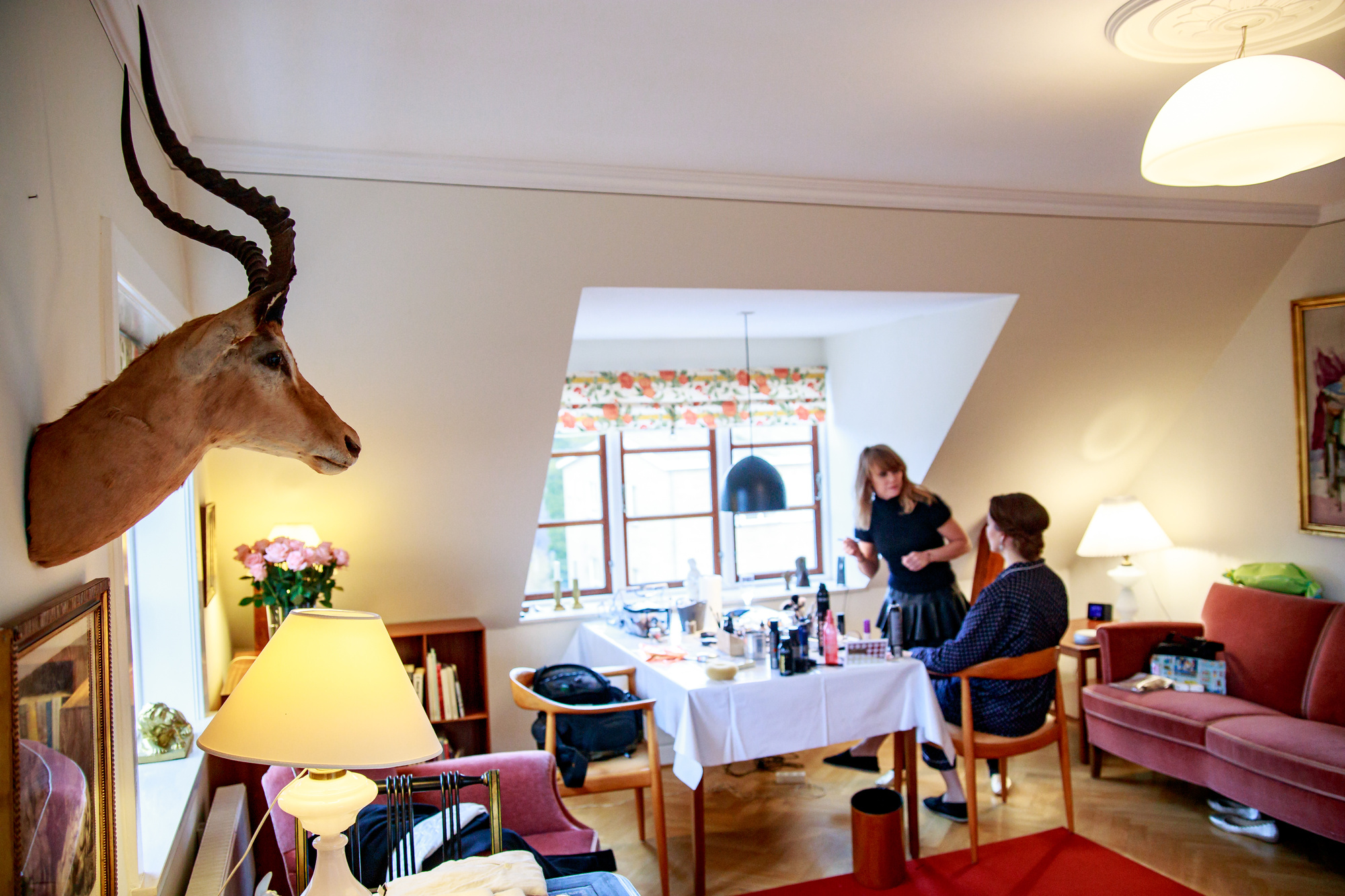 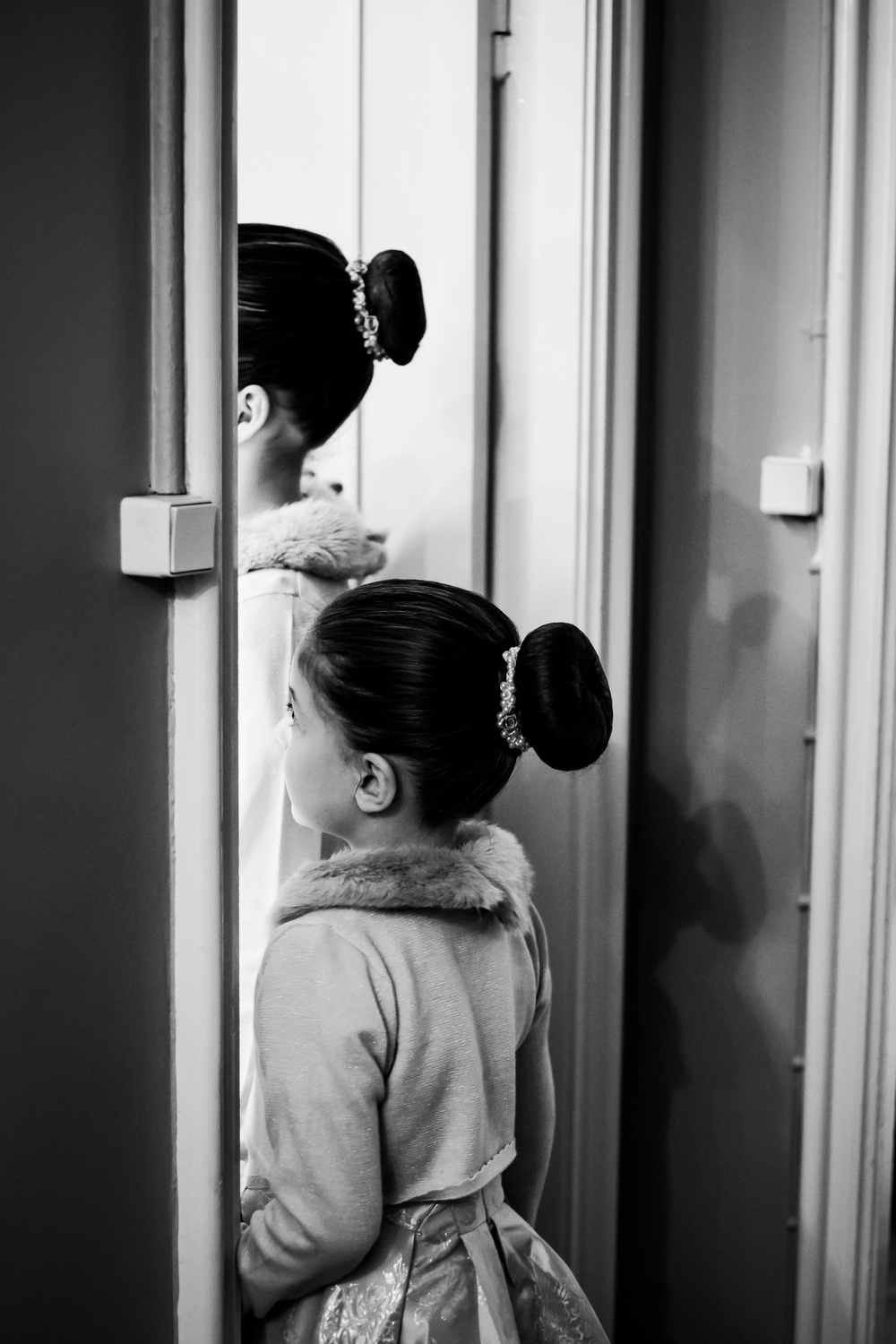 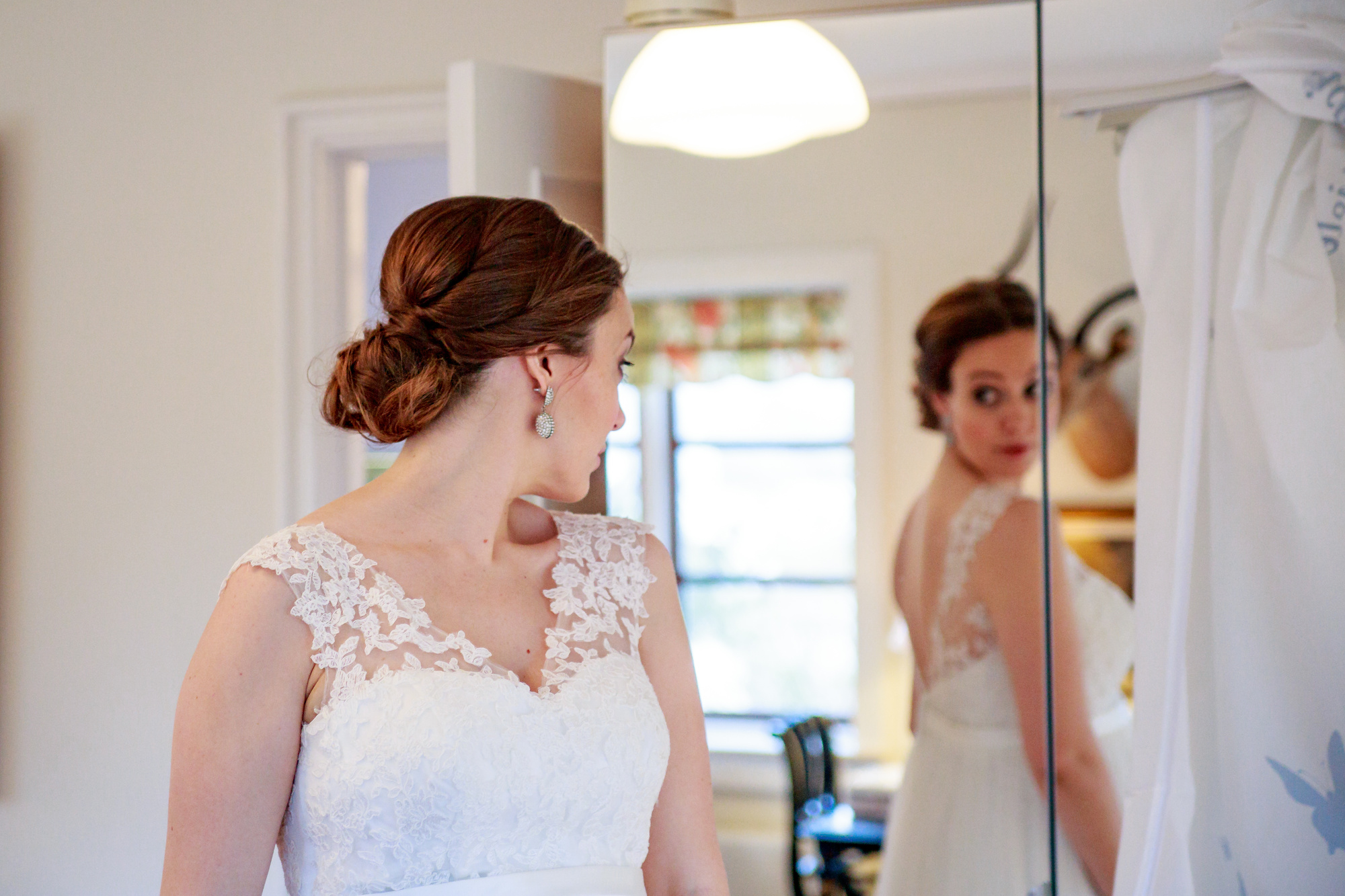 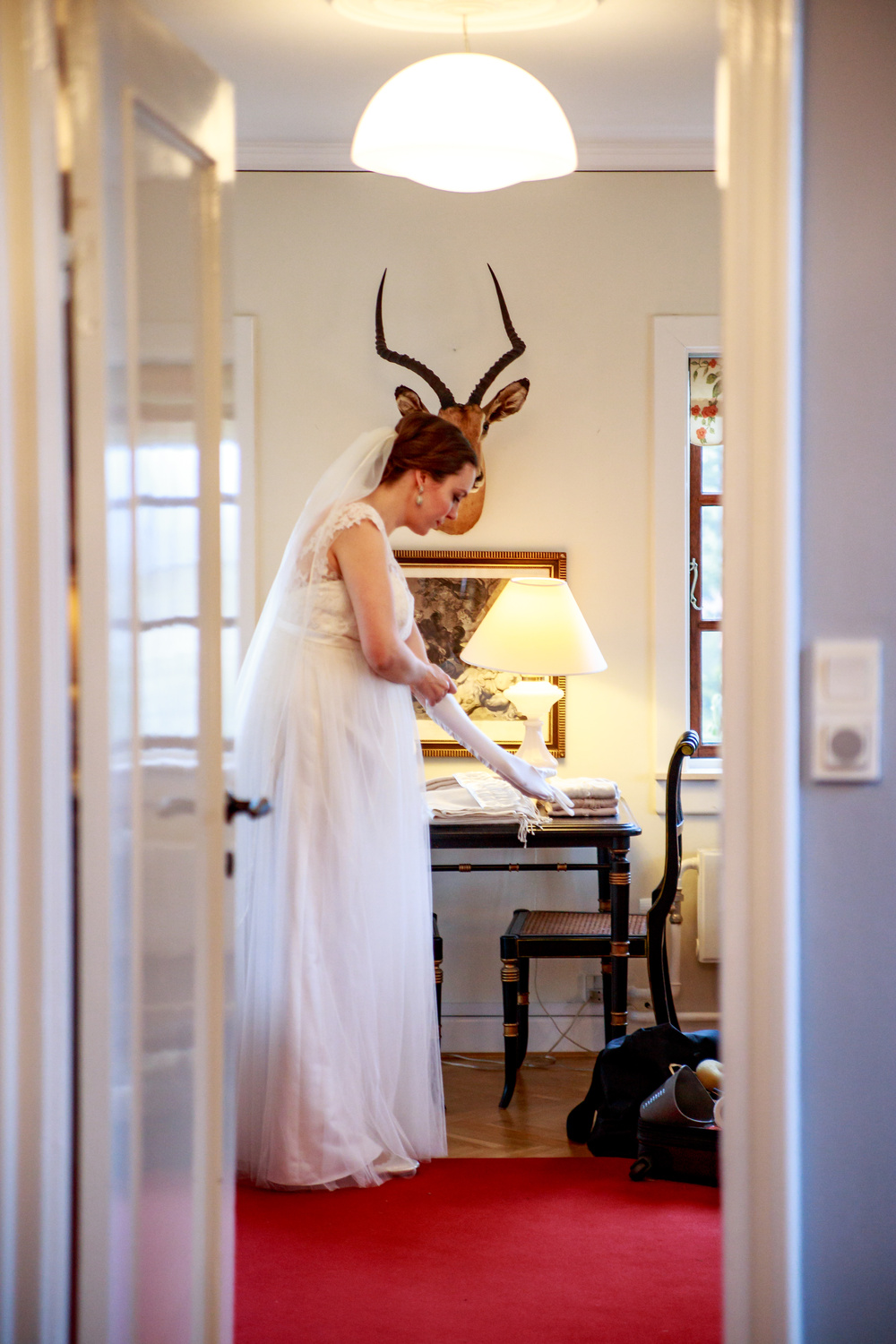 Weddings held in the darker and colder months of the year are different than summer weddings. In terms of photography, some parts are more challenging, others give the possibility to create something different from the usual wedding photos you can find on the Internet with hugging couples in the warm sunlight.

Luckily, Anne Sofie and Henrik were an awesome couple that made everything work and clearly had a lot of fun that day, which of course is the most important part.

Unfortunately, we don't live in an area where snow is guaranteed during winter. On the contrary, it is much more likely to rain and turn everything into mud.

However, we were lucky as Anne Sofie and Henrik's wedding day turned out to be quiet foggy - YES! 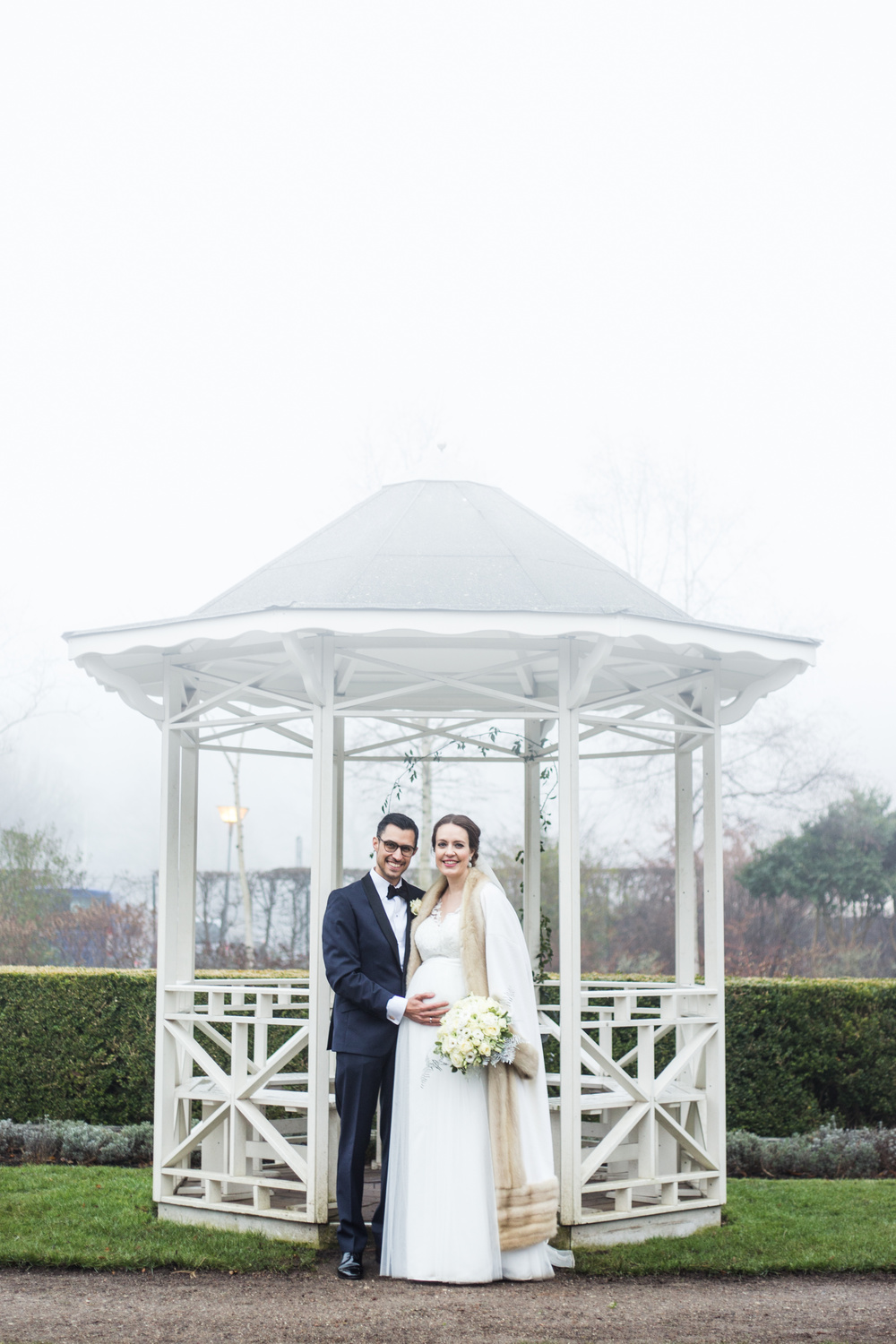 Anne Sofie and Henrik were very well prepared for their couple shoot. Both a big, fluffy coat for Anne Sofie, that almost made her look like a Disney princess, and large, bright umbrella had been organized. Luckily, we didn't need the umbrella. 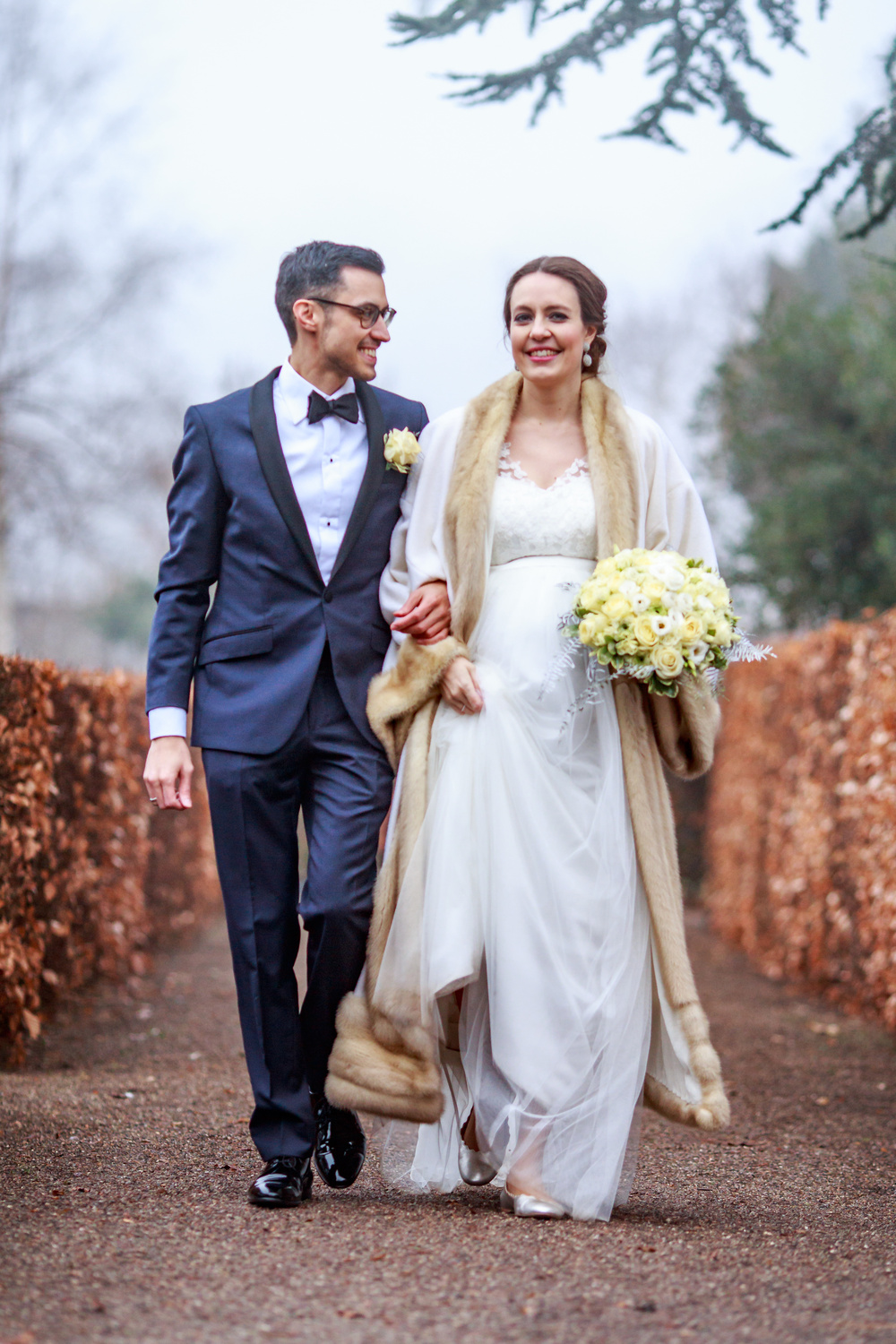 They had also scouted the area around the venue, Hotel Josty, beforehand as Anne Sofie's pregnancy and the limited amount of time would not make it possible for us to roam around for long to look for pretty backdrops.
We just had to walk a couple of minutes and were still able to take different kind of pictures in the gardens around Hotel Josty. 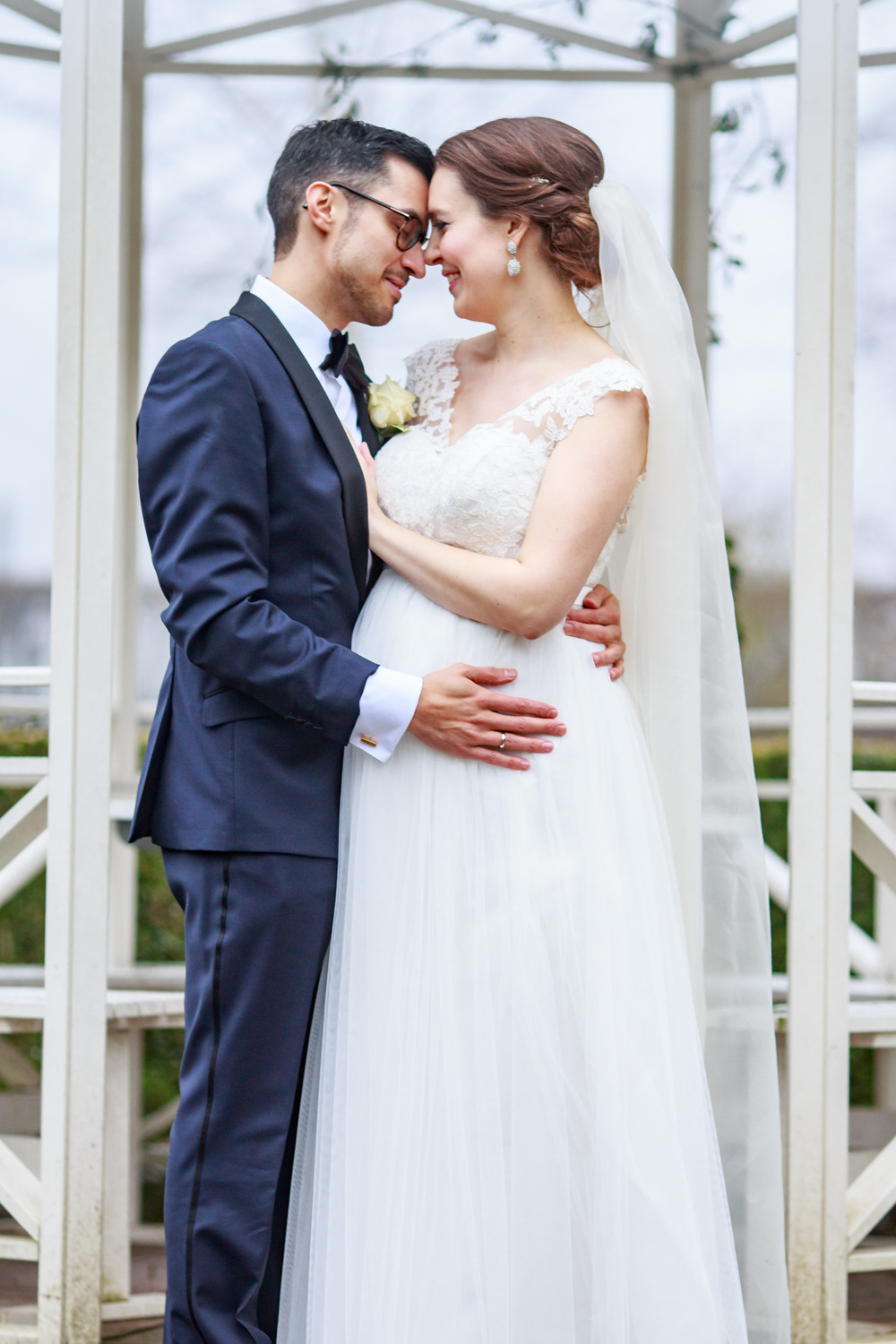 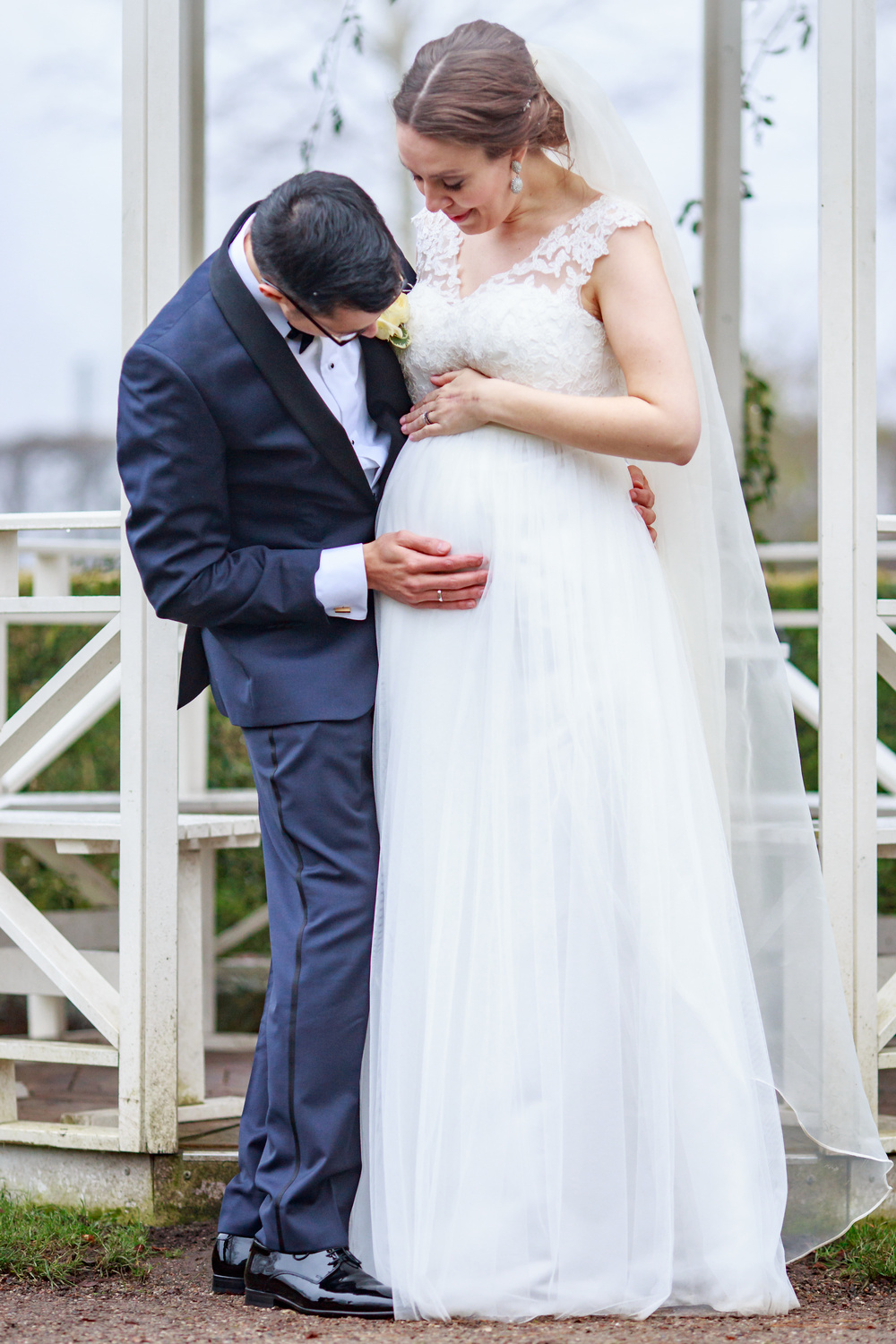 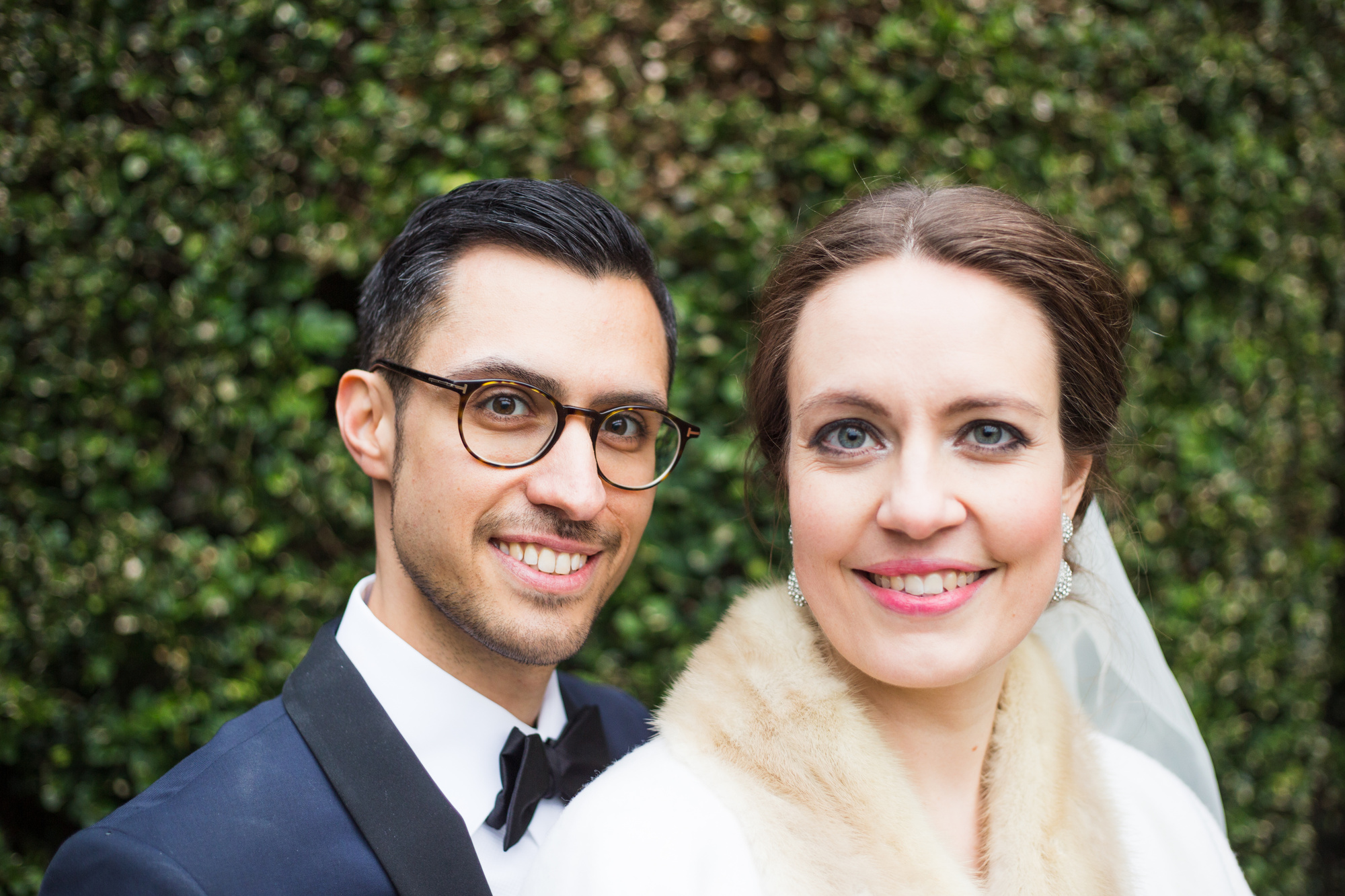 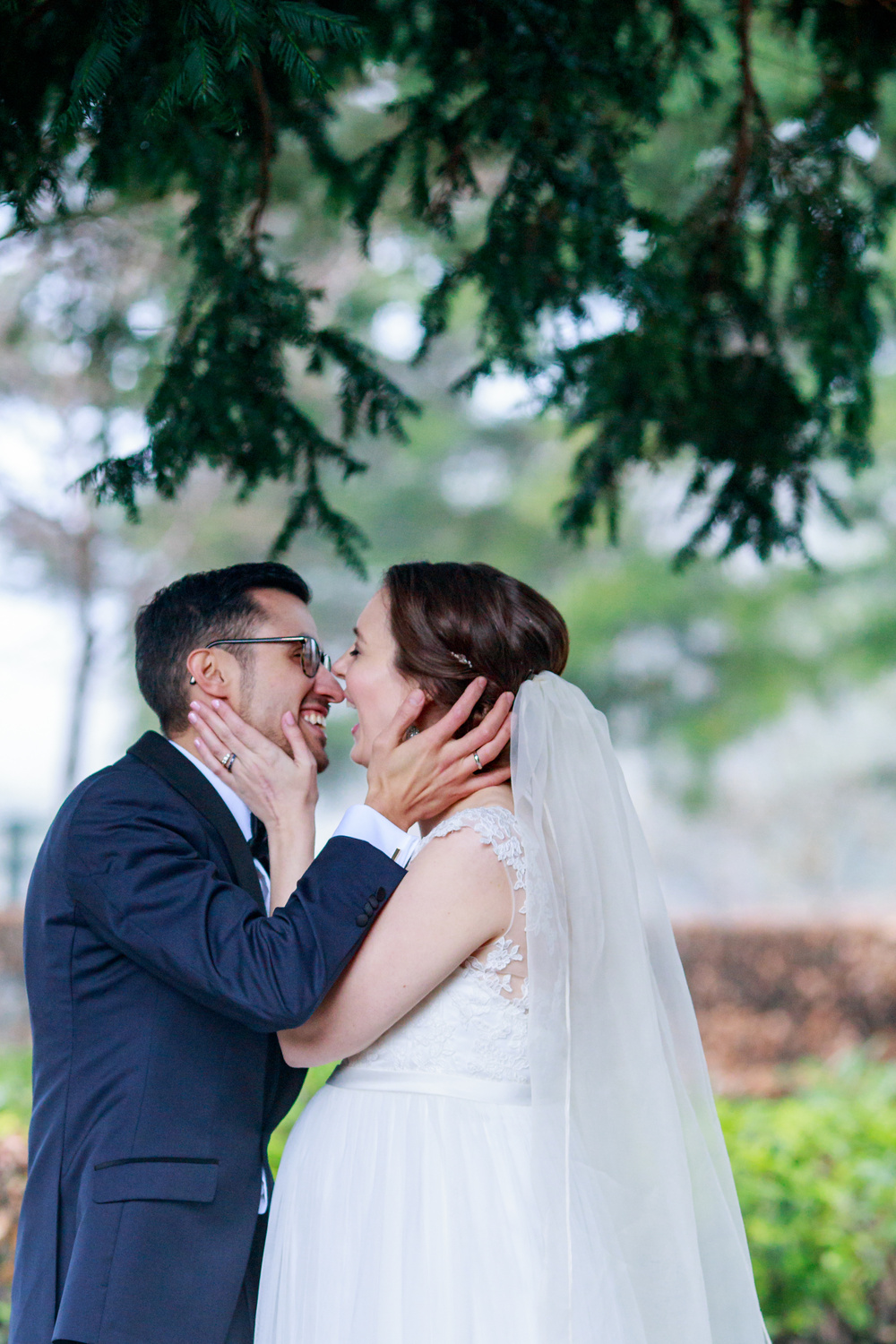 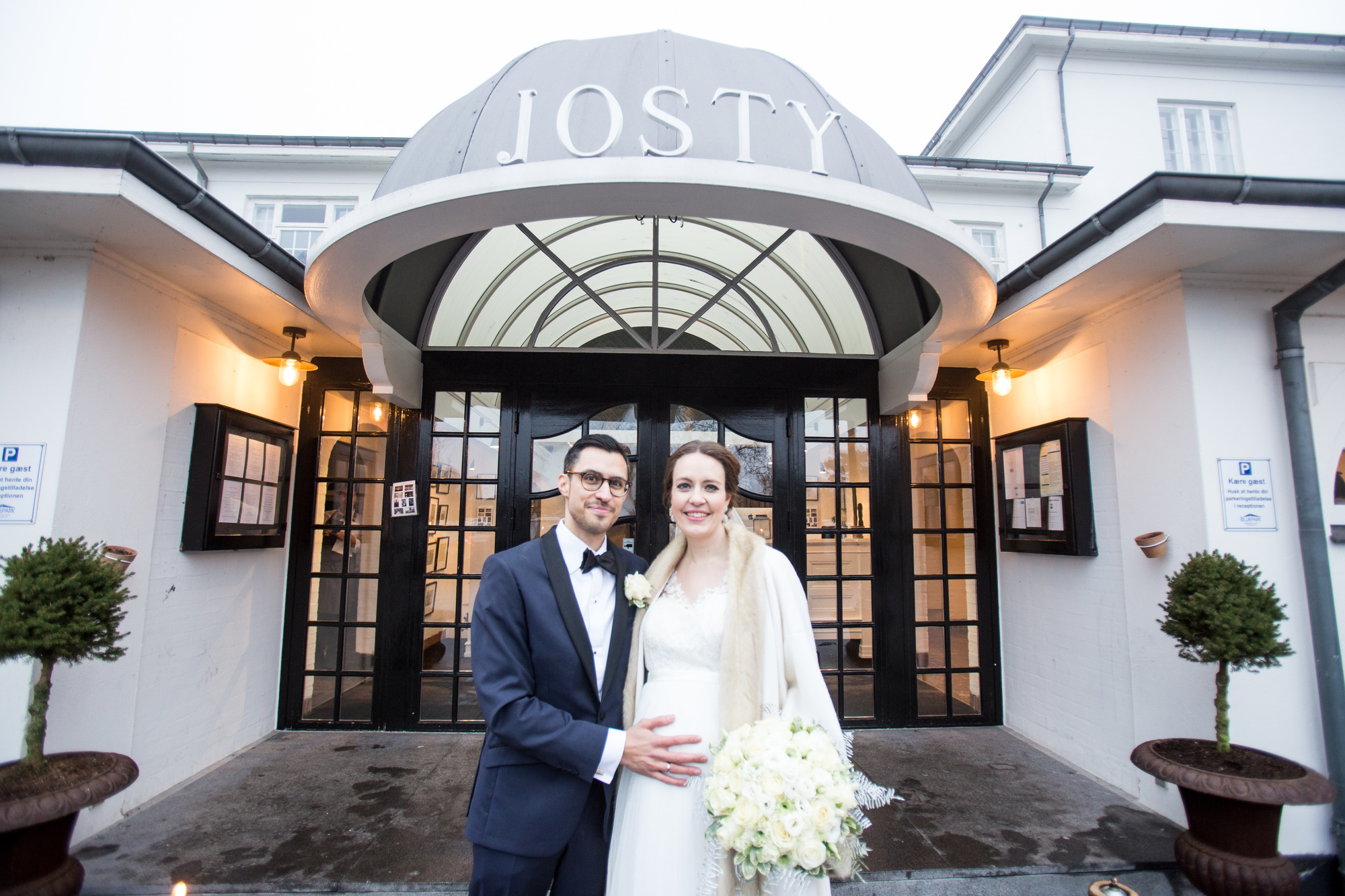 Hotel Josty provided rooms for both the reception and dinner. It lies just beside the huge Frederiksberg Garden, which is a popular park for runners, families and couples in the summer. Unfortunately, we couldn't use the park for photos at this wedding as the sun had already set after the couple shoot. The rest of the photos, including the group photos, were all taken inside. As we anticipated the need of flashs, we had brought plenty of batteries to keep the reload time for the flash as short as possible. If you need to use the flash at high power, the seconds for it to reload can be the important seconds to make the difference between getting the one moment or not. 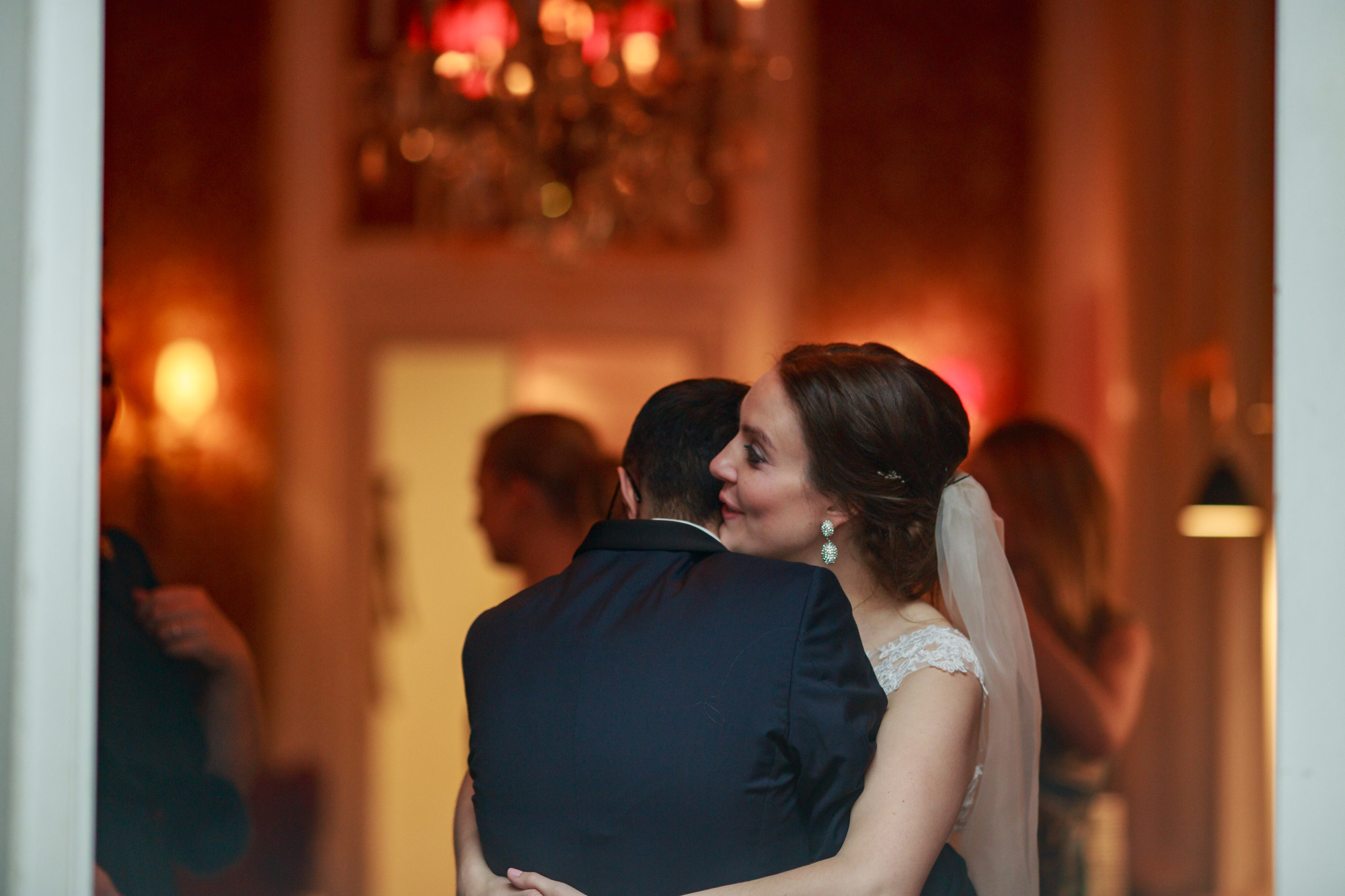 Hotel Josty's rooms varied a lot. Big, bright rooms were connected by smaller, darker corridors with covered walls which made for a beautiful atmosphere but were a tiny bit challenging for bouncing the flash. However, I still am a big fan of all the different chandeliers everywhere! 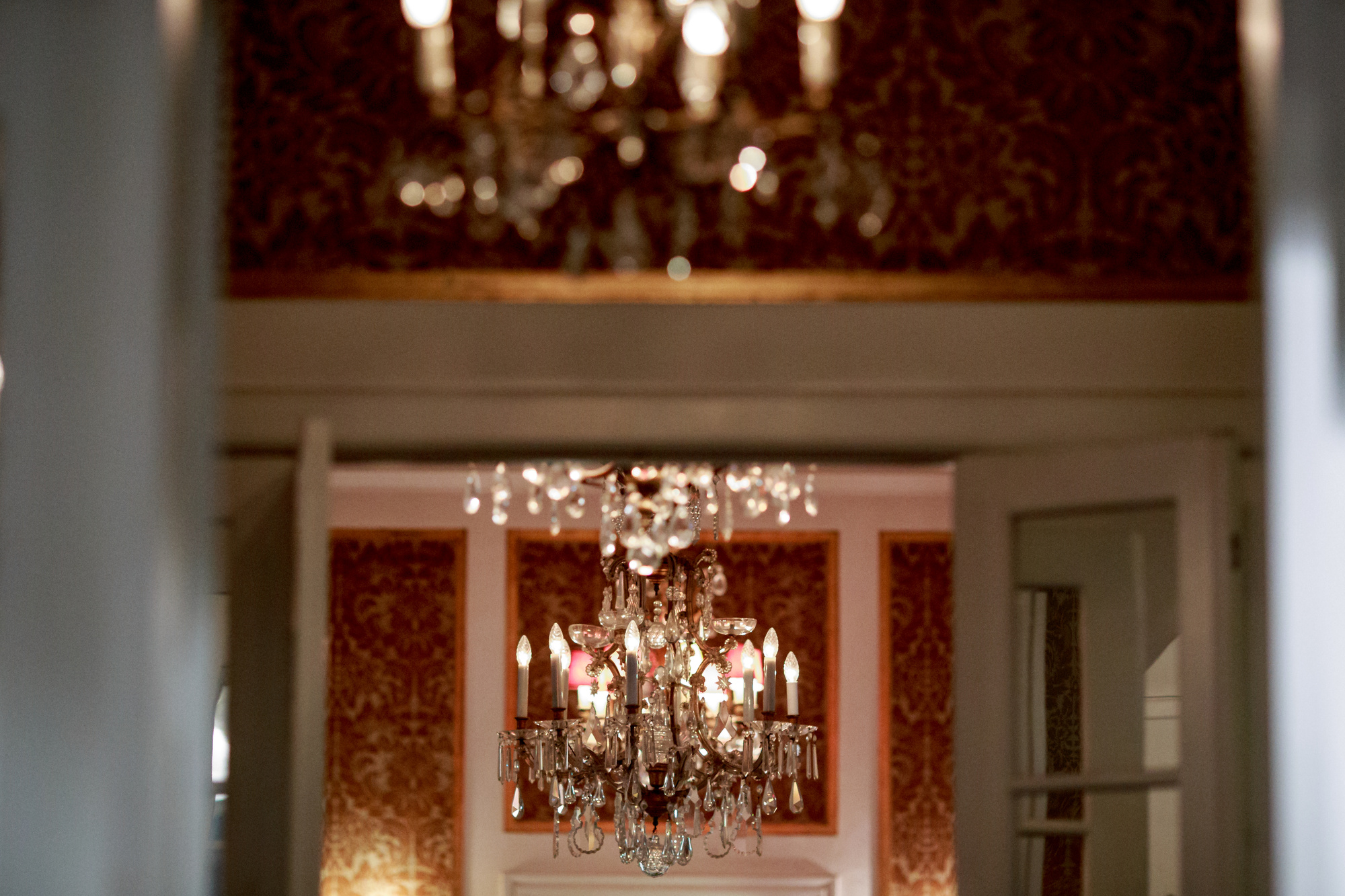 The dinner hall was epic with a high, painted ceiling and - again! - a huge chandelier. It looked like a room in a castle. The high ceiling meant that we had to fire our flash with high power the whole evening. As we were two photographers often placed at both sides of the room, we tried to not shoot away constantly and thus give everyone the impression of being in a club with techno lights. However, the balance between being as invisible as possible and still get all the important shots, shifts a little compared to shooting in available light. 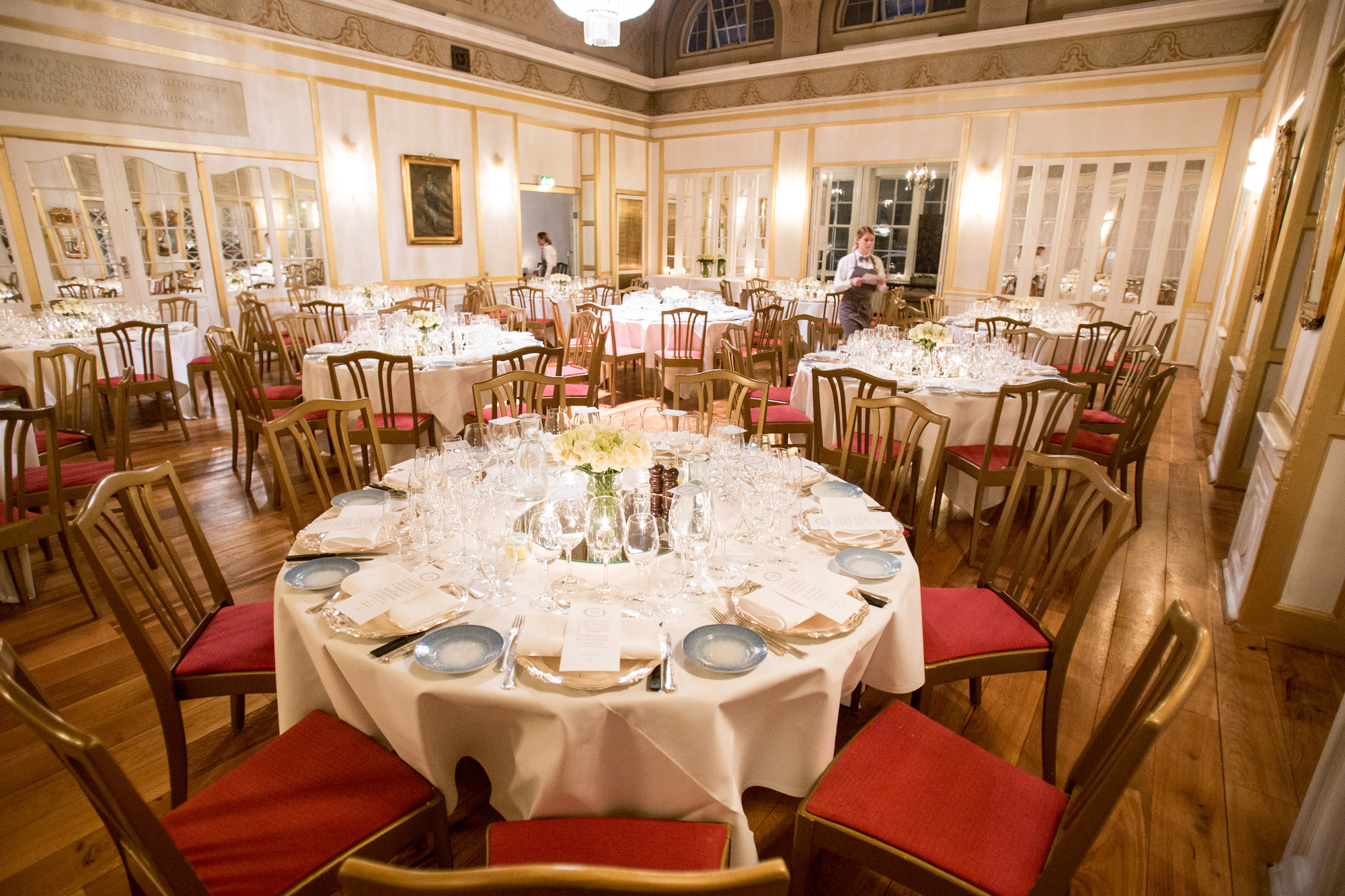 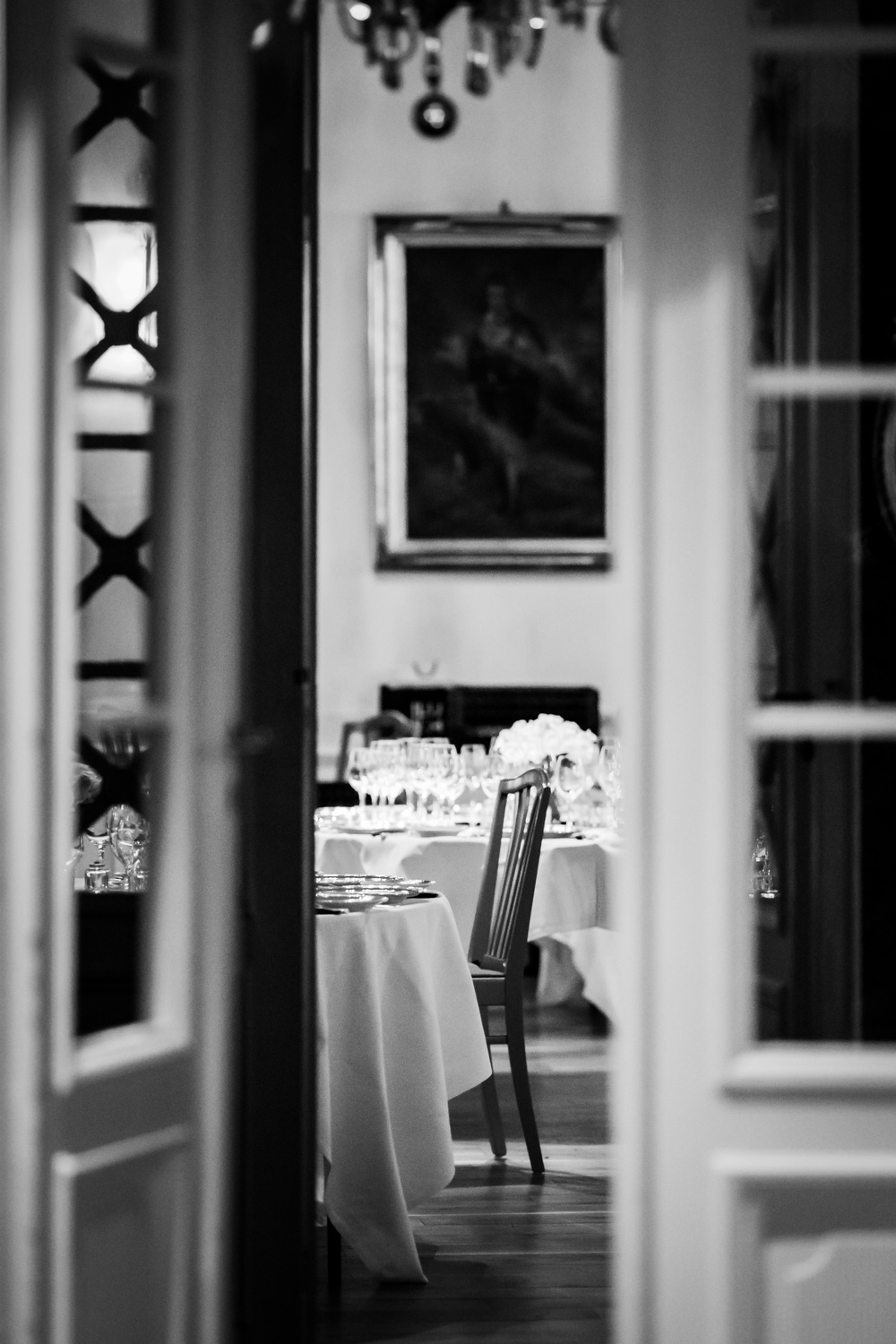 Be respectful of the couple and the guests, don't just stand in everyone's view all the time. Situational awareness will help you lot to know when you should be in position for an event happening, but also to sense the mood around you and whether people are getting annoyed because of you. One of our rules is for example to not take pictures while everyone is eating (if possible). 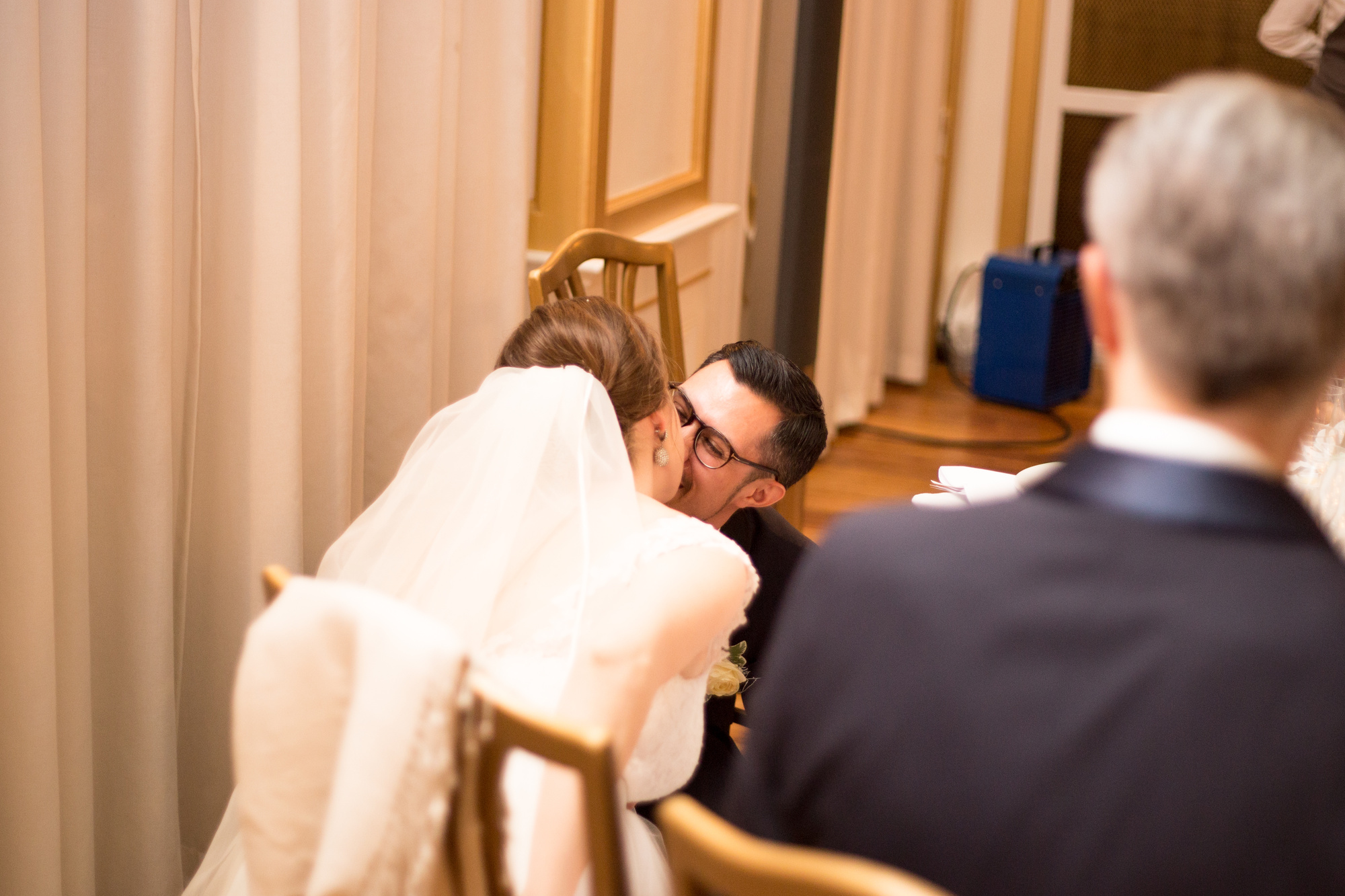 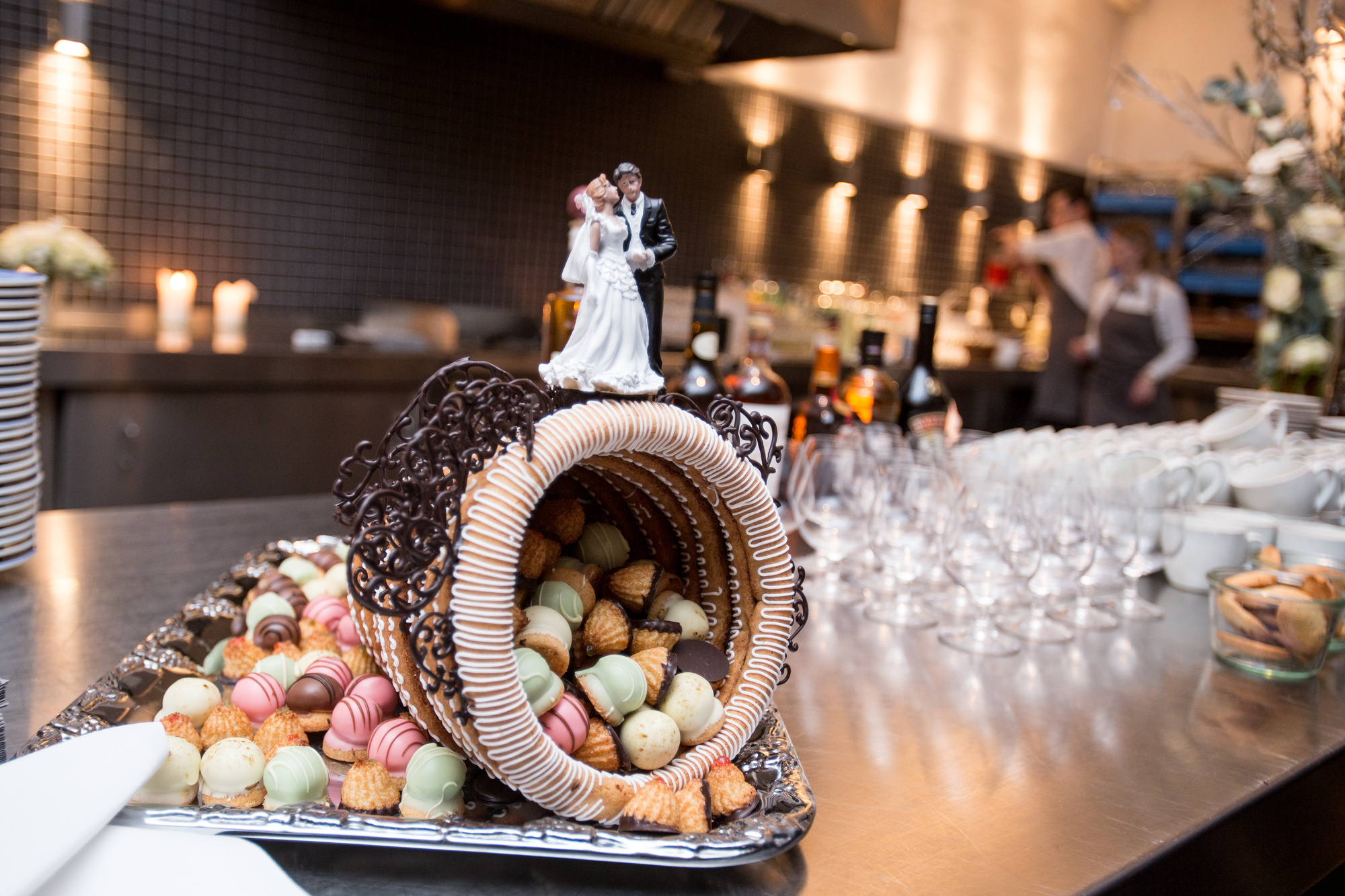 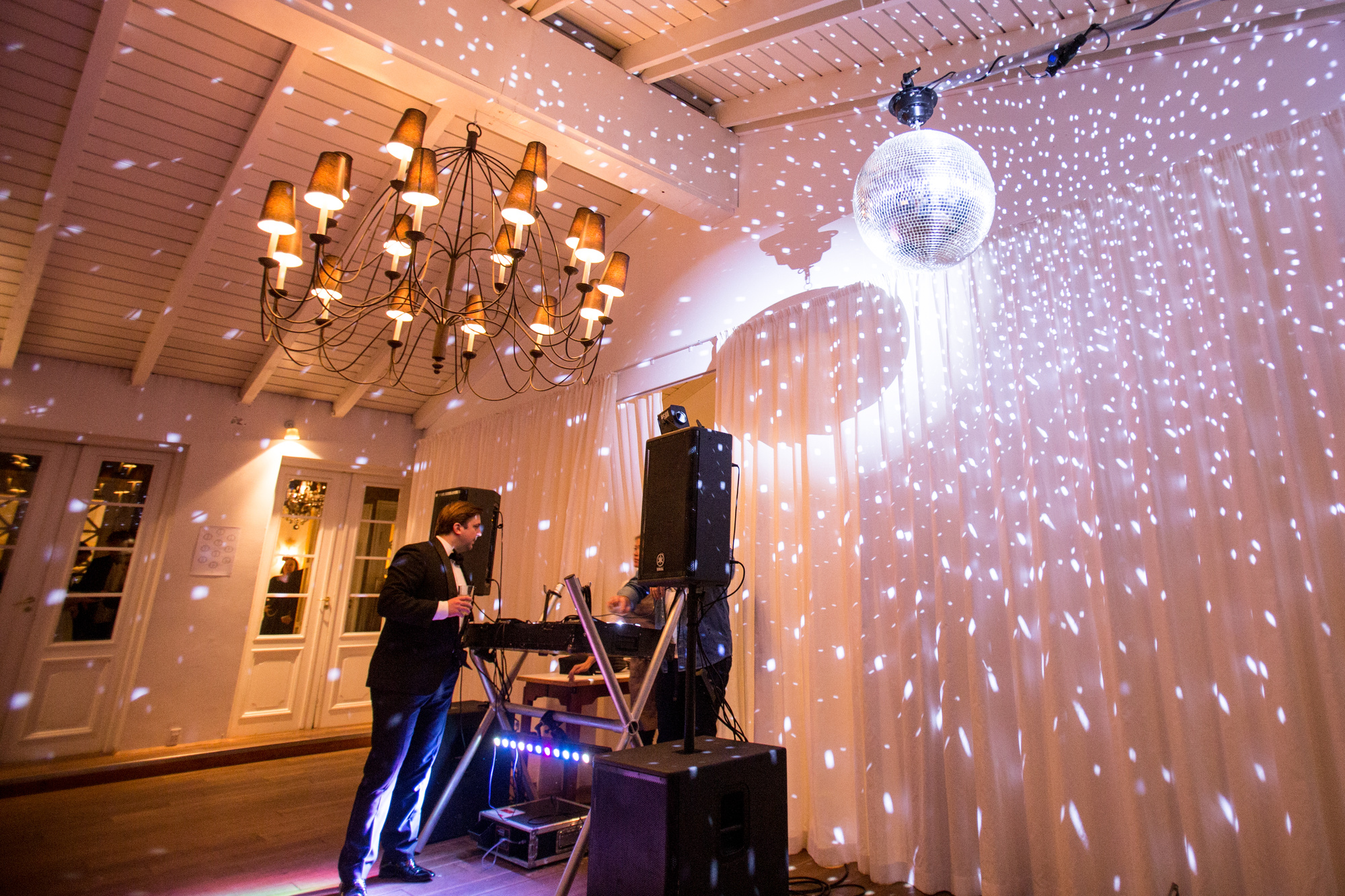 Communication between the couple and the photographer is of course important for every wedding.
However, the details of the preparation for a winter wedding are slightly different.

The couple will be aware of challenges that come with a winter wedding. They will think about the weather, where to put all the guest and keep them warm, how to not get sick shortly before, how to keep looking good when you're having a red nose that you really need to blow right now.

They might not know how the photographer might be influenced, though. Therefore, in our prep meeting early on, we highlighted the fact that not only the weather conditions might become a great challenge, but missing light most certainly will be an issue. The sun already sets in the early afternoon - a fact that can easily be forgotten if light is not your main resource to work with.

How we helped the couple prepare:

If you accept that you might not get photos of the couple bathed in the soft light of a summer afternoon, but instead jumping in a puddle while holding an umbrella you should be good. As most activities will take place inside, be prepared to use your flash all night and maybe even get creative with it. If you google for pictures of couples in rain, snow or fog, you will get a great amount of inspiration.

Having a couple that is aware of the challenges and ready to get creative, alternative wedding pictures is of course very helpful. Therefore, you should talk to your clients beforehand. Tell them about your ideas and maybe show some examples, get a feeling of what they are willing to do.

Last but not least: have fun! Enjoy the day and delight of the people around you. They are having a very special day in their lives no matter whether it is raining, snowing or burning hot. The pictures should and will show that. 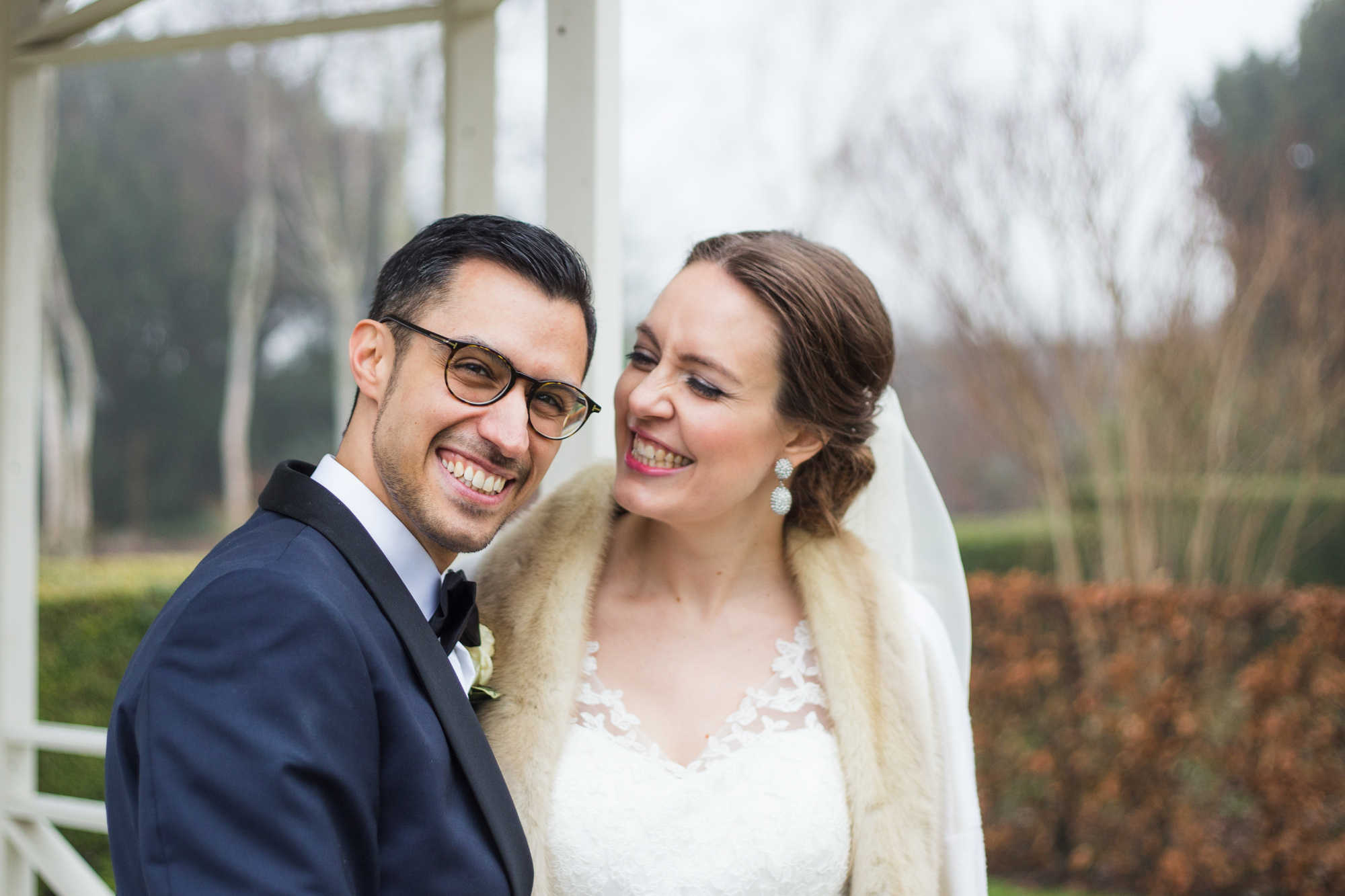 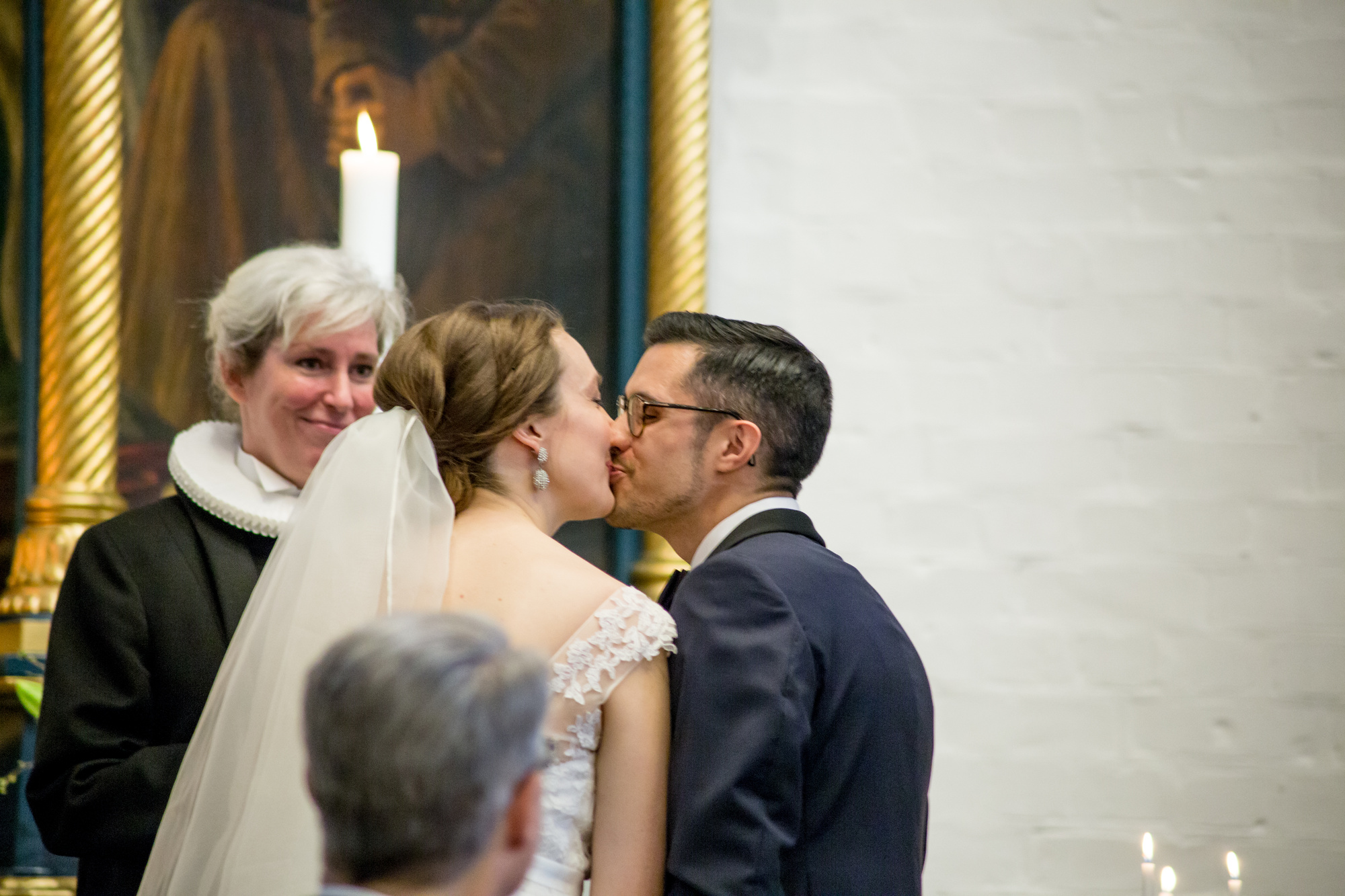